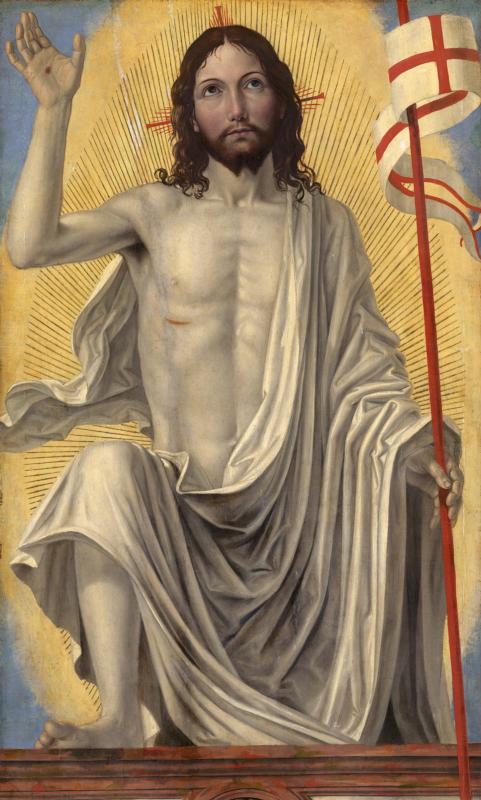 The Resurrection is depicted in “Christ Risen from the Tomb,” a painting by Italian Renaissance artist Bergognone. The story of the encounter of Mary of Magdala with the risen Christ in the garden on Easter morning, as recorded in the Gospel of John, is evocative and powerful. (CNS photo/courtesy of the National Gallery of Art)

It’s a Resurrection scene we’ve visited over and over, and yet it still grips us and sometimes brings us to tears.

The story of the encounter of Mary of Magdala with the risen Christ in the garden on Easter morning, as recorded in the Gospel of John, is evocative and powerful. Why is it so personally compelling?

Simple and terse words capture our attention: “Mary of Magdala came to the tomb early in the morning, while it was still dark, and saw the stone removed from the tomb” (Jn 20:1).

In John’s Gospel, Joseph of Arimathaea had already seen to the ritual anointing of Jesus according to Jewish burial custom. Mary came alone to the burial site that morning simply to be present, to bear witness as she had borne witness at the Crucifixion.

She was a long way from home. The village of Magdala was near Tiberias on the west side of the Sea of Galilee. According to Scripture, Mary, along with several women of means, followed the disciples and Jesus, and helped provide for them as they traveled from village to village.

Mary was perhaps unfamiliar with the big city of Jerusalem. What was it like to be a woman walking alone in the darkness of an urban morning, from wherever she had spent a gloomy, empty Saturday and a sleepless night, to visit the tomb of her friend?

To reach the burial site, she needed to go outside the city walls and pass by Golgotha, the scene of Jesus’ brutal execution. Was she afraid? What sadness and weariness accompanied her on that journey, and what shock wracked her body when she saw that the stone had been moved from the tomb?

Mary immediately raced to find Peter. And after he and another disciple inspected the linen cloths left behind in the tomb, they went back home, but Mary remained.

This is where the scene becomes most powerful and most personal to those of us who have read the passage so many times in our lives. St. Ignatius of Loyola, the founder of the Jesuits, urged his followers to pray with their imaginations. It’s a way of becoming intimate with the words of Scripture.

So, we come with Mary into the garden. Most of us don’t know what the climate or the topography of that Jerusalem garden would have been like on that Easter morning. However, we can use our imagination and we can reflect on the spring mornings of our own lives. The dew can be moist and cold on our feet, the brilliant, rising sun just beginning to cast shadows on the trees and the rocky tombs. The daffodils and irises of our memory push up through the dark soil around us, and around Mary.

As we let ourselves be present there, weeping with Mary in the confusion of the moment, imagining that another desecration has befallen Jesus even after death, we can almost taste her salty, lonely tears mixed with our own.

Then there is a man there, perhaps a gardener. Maybe he knows where they have taken the body. Why doesn’t she — why don’t we — immediately recognize him?

“Mary.” When Jesus speaks her name, she exclaims, “Rabbouni!” Master.

The earth moves a little with that word, “Mary.” We know then that Jesus wants to encounter us personally. We know that he desires to call us by name and that in personal encounter we will recognize him. We realize that many times we have failed to recognize him in ourselves and others.

In your imagination, let Jesus call your name in the garden and rejoice in his desire to know you better, to know you as his beloved disciple.

(Caldarola is a freelance writer and columnist for Catholic News Service. She lives in Omaha, Nebraska.)

PREVIOUS: Our days of thanksgiving: Easter Sunday and every Sunday

NEXT: We share in Christ’s dying and rising, all year long