‘The Catholic Catalogue’ tells of life lived with faith

If you think a book charting the flow of Catholic life through the seasons would be a big book, you’d be right. “The Catholic Catalogue” by authors Melissa Musick and Anna Keating (Image, New York, 2016) comes in at a hefty 418 pages because as its subtitle reads, it is a “field guide to the daily acts that make up a Catholic life.”

In other words, the books surveys American Catholic culture with the intent to pass on the fabric of Catholic faith and some of its cultural expressions. No book could cover all the numerous shapes and hues of Catholic life in the United States because our country’s culture is constantly changing.

The traditions of my own Italian Catholic heritage – such as an annual procession through the streets with a statue of Mary on the feast of the Assumption — were new in America at the turn of the 20th century as the previous immigrant German and Irish Catholics were already well established in communities of the Philadelphia region.

Now new immigrant groups including Hispanic Catholics from Mexico, the Caribbean, central and South America, plus newcomers from Africa and Asia, bring the wealth of their cultures, many expressed through their devout Catholic faith. 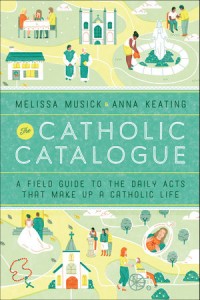 Authors Musick and Keating alternate writing sections of the three-part book with an eye toward raising children in the faith – there are abundant family craft projects. But Catholic converts will gain a valuable and wide window into elements of Catholic culture of which they might know little.

“The Catholic Catalogue” is not a straight-through read but rather a home reference to prepare for Catholic feasts or to answer questions as they arise.

The organization of the book helps greatly in this regard. Part One’s “Smells and Bells” offers essays on using blessed medals, venerating relics or taking part in processions. Particularly useful are the how’s of Eucharistic adoration, Christian meditation and prayers before meals, but also the why’s of using holy water, oils, incense and all those signs so closely associated with Catholic worship and the sacramental system.

For example, “Making the Sign of the Cross” explains not only how to make this fundamental acknowledgment of God’s presence, but what each touch of the fingers means, plus a little history of the eastern and western rites of the church for context — all in five paragraphs.

Part Two, “Seasons of the Church Year,” takes on the Big Four of liturgical seasons – Advent, Christmas, Lent and Easter – but in down-home ways. The chapter on Easter doesn’t go into heavy theology but properly looks at the whole season.

Of course Easter is fun too, so there are sections on decorating Easter eggs (using all-natural dyes), preparing the Easter dinner (“The feast at Mass flows into the feast at home.”) and making an Easter basket.

For the latter, the authors suggest including with those chocolate treats a book for children of various ages. While it can be hard to find a good book on Easter specifically, they suggest “finding beautiful, well-written books. Beauty points the way toward its source.”

But beyond those great seasons and their many cultural traditions, there is Ordinary Time through the rest of the year. The authors use major church feasts such as the Assumption in August or saints’ feast days such as St. John the Baptist in June to explain Catholic prayers and spirituality.

They sprinkle these with familiar cultural traditions and ones you’ve likely never heard of, like St. John’s fires to mark the baptist’s birthday.

“Seasons of Life” is Part Three of the book, and charts the movement of life from infancy (naming a child) through the sacraments of initiation such as baptism and confirmation, then on to adulthood (making a retreat, finding a parish, taking a family road trip).

One topic I hadn’t expected was the passage on Catholic tattoos. They’re not for me (and hopefully not for my kids), but we shouldn’t avoid talking about tattoos, either. Since 36 percent of Americans ages 18-25 have at least one tattoo, the authors tackle tats intelligently and note the Catholic Church does not forbid body art.

Even as the book ends with the inevitable deterioration of old age and finally death, and the Catholic prayers and traditions that go with them, it ends on a note appropriate for this Easter season: of looking forward to eternal life.

While “The Catholic Catalogue” doesn’t claim to be comprehensive, it is worthy addition to the bookshelf in any Catholic home. A humble suggestion: write your own notes, recipes or prayers and slip them into the appropriate pages of the book to make it truly your own Catholic field guide.

NEXT: Mary shows model of fighting the paralysis of terrorism