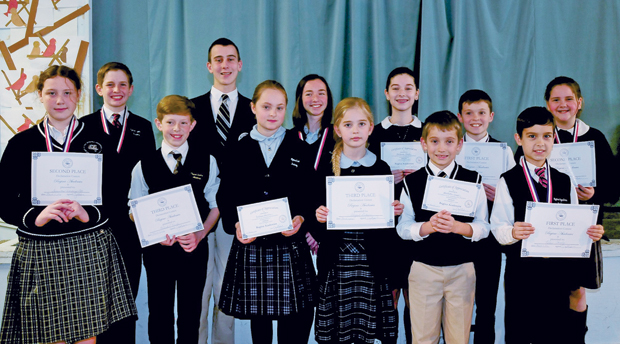 Students of the four Regina Academies int he Philadelphia Archdiocese show the commendations they earned at a public speaking contest this month.

Have you ever heard of a declamation contest? If not, don’t feel bad.

While these competitions date from at least ancient Roman times and were once a common feature in schools across the nation, they have largely disappeared in the last 50 years.

And while they’ve largely fallen by the wayside, thanks to the area’s Regina Academies, they’re not a completely dead art form.

The system of four independent schools offers a classical education in which the students learn reasoning, logic and critical thinking skills as well a mastery of reading, writing and mathematics. Latin and Greek are also part of the core curriculum.

For the sixth year in a row the four schools making up Regina Academies — Regina Angelorum in Ardmore; Regina Coeli in Abington; Regina Luminis in Downingtown and Regina Academy at St. John the Baptist in Ottsville — gathered for the contest this March in the basement of St. Colman Church in Ardmore, which was filled to capacity.

Regina board member Tim Murname believes the reason for the contest is simple.

“We understand that having the confidence to present and defend your ideas in public creates leaders who will someday improve both our church and our society,” he said.

After all, he said, “leaders in business and technology are rarely the highest IQ people but rather those who can express their ideas and get others to follow.”

The competition saw one student from each school compete in three brackets: Poetry, grades 3 and 4; Prose, grades 5 and 6; and Orations, grades 7 and 8. 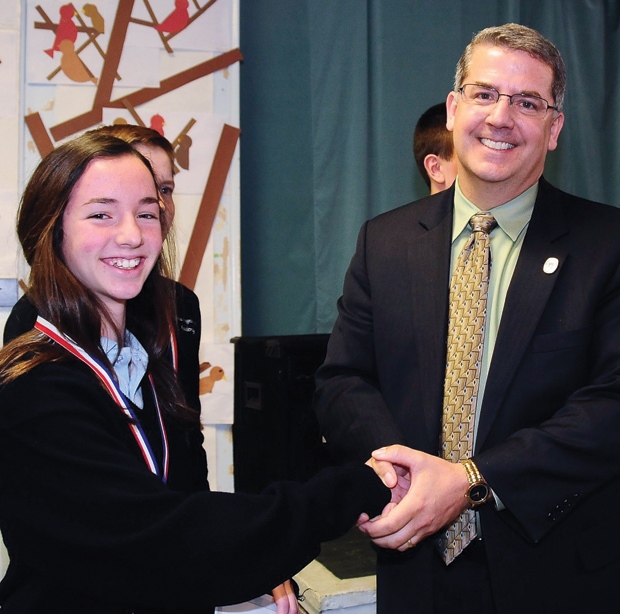 Regina Academies CEO Jim Growden observed, “To witness the polished (speaking abilities) of these students, one can see how much their hard work preparing these presentations … enables (them) to become proficient and confident public speakers.”

“The winners this year were really impressive,” said Murname. “To see third and fourth graders perform in a way that competes with eighth graders is truly remarkable.”

“The children’s speeches left me speechless. I sat there enthralled,” he said. “The 8- and 9-year-olds were every bit as astonishing as the 12- and 13-year-olds. They all recited long classical passages flawlessly and with a twinkle in their eyes that said, ‘This is fun!’”

NEXT: Catholics of archdiocese donate $645K to retired religious