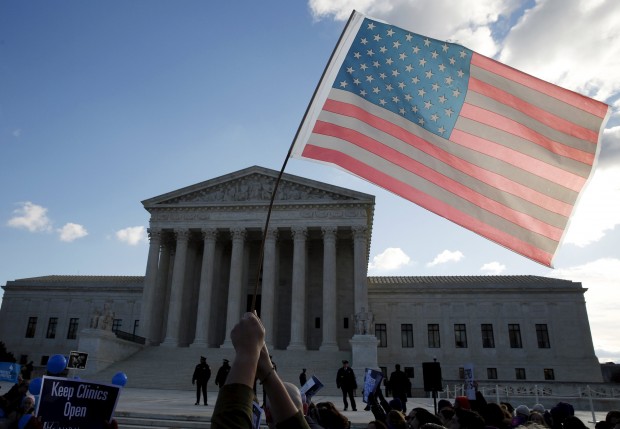 Two Pennsylvania Catholic bishops, Pittsburgh Bishop David A. Zubik and Erie Bishop Lawrence T. Persico, have called for prayer for religious freedom on March 23. On that date oral arguments will be heard by the United States Supreme Court on the Zubik v. Burwell case, an appeal challenging the U.S. Department of Health and Human Services’ contraceptive mandate. Both dioceses are among the petitioners.

The “HHS Mandate,” part of the regulations of the Affordable Care Act, requires employers to include contraceptive services, including contraceptive means that could cause abortion, in their employee health care plans.

Faced with opposition from a number of groups on the grounds that the mandate is an infringement on religious liberties, the HHS, which is now headed by Secretary Sylvia Mathews Burwell, issued a very narrow exception which in effect upheld the mandate in most cases.

Under the exception, non-exempted religious groups could decline to directly provide contraceptive services on their employee health care plans but would be required to report the names of the employees to HHS who would then require health care insurers to provide the services anyway at no charge.

The religious entities argue this changes nothing because the requirement to report makes the religious employer complicit in the provision of contraceptive services, in violation of their religious beliefs.

“Since our diocese is the lead agent in this appeal, it is my duty to be present for those arguments in front of the high court,” Bishop Zubik wrote in his letter to the faithful of the Pittsburgh Diocese. “This mandate challenges the very core of our religious freedom. Yet there are many voices who simply do not understand the implications that the HHS Mandate has for all people of faith who could be forced to violate their most sacred beliefs and practices. We live in a country founded on the very religious freedoms now threatened.”

Bishop Persico, will also be present for the oral arguments, wrote in a letter to his people, “We are simply arguing that religious organizations should not be required to provide or facilitate insurance coverage for services that violate our religious beliefs. If we do not secure that right, what is to stop the government from using the same arguments to mandate that the Catholic Church provide coverage for abortion?”

Around the country a number of appeals were filed in courts opposing the mandate, and those lower courts ruled either in favor of HHS or in favor of the appellants.

While the Supreme Court will have the final say, should its ruling be evenly divided — as it well might be with the death of Justice Antonin Scalia — the decisions of the district courts will hold in their area but will not serve as precedent until a full Supreme Court rehears the challenge.

Other faith-based appellants in the case include the Little Sisters of the Poor, East Texas Baptist University, Southern Nazarene University, Geneva College, Priests for Life and the Roman Catholic Archbishop of Washington.

In his letter, Bishop Zubik asked that all parishes of the Pittsburgh Diocese make Wednesday of Holy Week, March 23, a day of prayer and that every parish offer eucharistic adoration for a period of time on that date.
“This is a special opportunity to drop to our knees united in prayer, lifting up our collective petitions to our Heavenly Father,” he wrote.

In his letter to the Erie faithful, Bishop Persico asked “that all Catholics in the Diocese of Erie pray and fast with the intention that religious liberty be upheld.”

Surely, he wrote, “our government can find a way to allow employers to follow their conscience and live in freedom. Religious liberty protects the right of each of us to pursue the truth, to embrace it and shape our lives around it – without government interference. I am hopeful the court will uphold religious liberty, one of the essential pillars upon which our country has thrived for centuries.”

“Jesus often embraced fasting as a prayerful response to great challenges,” Bishop Persico write. “During these final days of our Lenten journey, I encourage you to join me in following his example.”

On March 23, the day of the oral arguments, hundreds of religious women, college students and clergy will participate in a “Let Them Serve” rally in front of the Supreme Court in support of religious freedom. Among them will be former Philadelphian and former spokesperson for the American bishops on life issues, Helen Alvaré, along with members of the group Women Speak for Themselves.

In Philadelphia at 10:30 a.m. on that day, the Archdiocese of Philadelphia’s Office for the New Evangelization and Women Speak for Themselves will sponsor a rally on the steps of the Cathedral Basilica of SS. Peter and Paul.

Afterwards, participants will spend time in service at Holy Family Home, a home for the aged conducted by the Little Sisters of the Poor in West Philadelphia, according to Megan Schriever, of St. Norbert Parish in Paoli, the local WST spokesperson.

The Diocese of Pittsburgh suggests Catholics pray the following prayers:

Father of Mercy, in whose hands rest every human heart and the rights of peoples:
Inspire, we pray, the Supreme Court justices of our land, so that freedom of religion might be upheld, not simply as the right to worship, but to live our faith in word and deed.
We ask this through our Lord Jesus Christ, your Son, and with the help of Mary, our dear Blessed Mother and patroness of our country.
Amen.

Father of Mercy, who has given us the gift of faith and called us to live it in worship, words and deeds:
Inspire, in this hour, the Justices of the Supreme Court of the United States. May they uphold the rights given by our Constitution, protecting freedom of religion for all people.
May our country always be “one nation, under God, indivisible, with liberty and justice for all.”
We ask this through Jesus Christ, your Son, and with the help of Mary, our dear Blessed Mother and patroness of our country.
Amen.

PREVIOUS: Relics of a saintly ‘sign of hope’ come to South Philadelphia