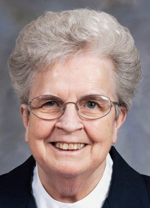 Born in Mahanoy City, Pa., Sister Margaret entered the Congregation of the Sisters, Servants of the Immaculate Heart in 1949 from Mahanoy City and professed her vows in 1952.

She taught in various elementary schools in the Archdiocese of Philadelphia and the Dioceses of Allentown, Richmond, Arlington, Metuchen, Hartford and San Jose.

Sister Margaret worked five years in Mercy Suburban Hospital in Norristown before being assigned to Camilla Hall in 2008.

The funeral Mass was celebrated March 23 at Camilla Hall. Msgr. Joseph Logrip was celebrant and homilist. The concelebrant was Father William E. Dean. Serving at the altar were Deacons Frederick Kerr and James Owens.

Sister Margaret is survived by members of  her religious community including her sister, Sister Claire Holzenthaler, I.H.M., and many loving nieces, nephews, grandnieces and grandnephews.  She was predeceased by her parents, Vincent Joseph and Elizabeth Alma Flannery Holzenthaler and her sisters, Alice (Ray) Hennesey and Elizabeth (Frank) Hogan.

NEXT: Sister of St. Joseph, a longtime teacher, dies at 93