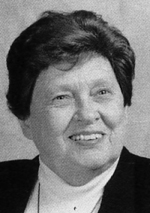 Sister Alice Patricia Waters, S.S.J., died Jan. 2 at St. Joseph Villa, Flourtown. She was in the 68th year of her religious life and was 91 years old.

Born in Washington, D.C., on Sept. 10, 1924, Sister Alice was the daughter of James Waters and Mabel Howard Waters. She attended Holy Name Grade School and McKinley Evening High School in Washington. She entered the Congregation of the Sisters of St. Joseph on Sept. 14, 1948 and professed final vows on Aug. 7, 1956.

As a teacher Sister Alice taught in the Archdiocese of Philadelphia and the Dioceses of Wilmington and Allentown. In 1993 she continued her ministry as school aide at St. Luke School in Glenside, and then as a volunteer at St. Luke Convent.

She became a resident of St. Joseph Villa Aug. 1, 2013 where she remained until her death.

The funeral Mass was celebrated Jan. 7 at St. Joseph Villa.

Sister Alice is survived by nieces, nephews, grandnieces and grandnephews and members of her SSJ congregation. She is the sister of the late Robert, James, Francis, Paul Waters, Mary McMahon and Patricia Callaghan.