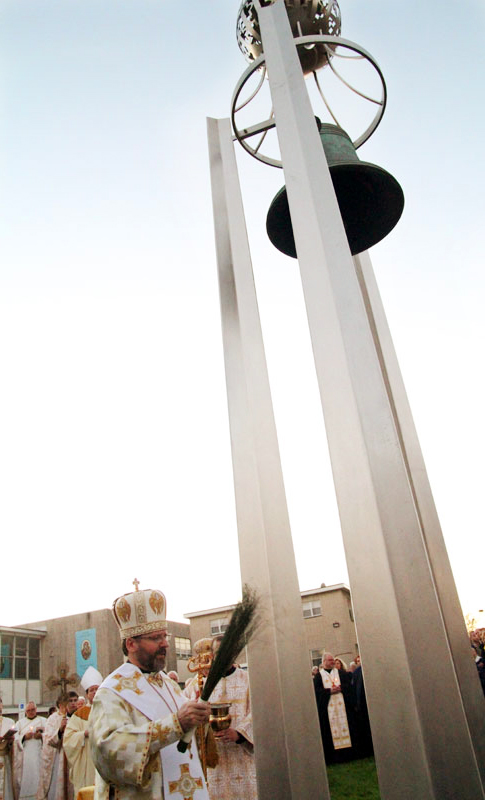 The new bell tower at the Ukrainian Catholic Cathedral of the Immaculate Conception in Philadelphia — seen as it is blessed by Major Archbishop Sviatoslav Shevchuk in November 2015 — will be the site of prayers for peace in Ukraine April 17. (Photo by Sarah Webb)

Ukrainian-Americans in the Delaware Valley will offer their prayers for peace in Ukraine and remember the victims of the worst nuclear accident in world history, at Chornobyl, Ukraine, at an event Sunday, April 17 at 3 p.m. in the Ukrainian Catholic Cathedral of the Immaculate Conception, 830 North Franklin Street in Philadelphia.

A commemorative concert and prayer service will include prayers, songs, reflections and hope for peace.

The event will conclude on the grounds of the cathedral by the Bell Tower, where to the pealing of church bells, prayers will be offered for an end to the ongoing war in eastern Ukraine and a flock of white doves, symbols of peace will be released.

After the catastrophic meltdown of the nuclear reactor at the Chornobyl Nuclear Power Plant in the Ukrainian city of Pripyat on April 26, 1986, an explosion and fire released large quantities of radioactive particles into the atmosphere, which spread over much of the western U.S.S.R. and Europe.

The Chornobyl disaster was the worst nuclear power plant accident in history in terms of cost and casualties. The battle to contain the contamination and avert a greater catastrophe ultimately involved over 500,000 workers and cost an estimated 18 billion rubles.

During the accident itself, 31 people died, and long-term effects such as cancers are still being investigated. The city of Pripyat, which had a population of 49,360 at the time of the accident, was left a virtual ghost town when it was evacuated the day after the Chornobyl disaster.

Since that time, international studies have shown that millions of people have been afflicted with the medical effects of radiation exposure, including cancers, birth defects and premature death.

Today the people of Ukraine, besides suffering from the effects of Chornobyl, also are the victims of an ongoing war in eastern Ukraine, fueled by the Russian invasion of Ukrainian territory. Over 10,000 people have lost their lives, including 2,500 civilians, as well as thousands who were wounded in battle. Hundreds of thousands of civilians have relocated to other areas of Ukraine because of the hostilities in the eastern part of their country.

Sunday’s event is being coordinated by the Ukrainian Community Committee of Philadelphia, which is comprised of more than 24 local organizations.