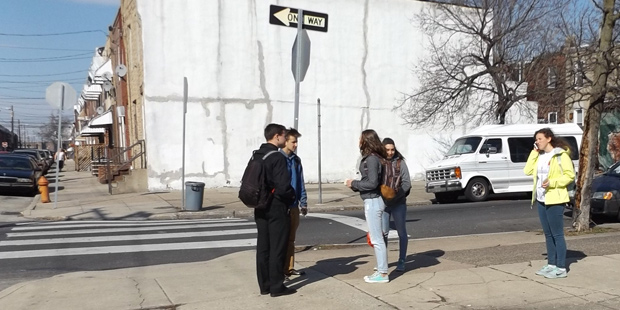 Volunteers of the Legionaries of Christ-led Youth Mission team gather on a Grays Ferry street corner on a day during the recent Holy Week before going door to door in the neighborhood, asking for residents' prayer intentions, for which the group and parishioners prayed during a special liturgy. 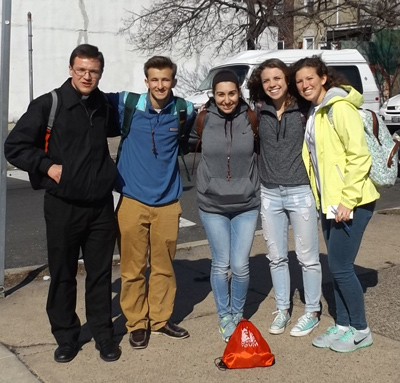 You see a lot of things in South Philly’s Grays Ferry neighborhood.

You see teenagers and young adults crossing themselves as they pass St. Gabriel Church at 29th and Dickinson streets, just before they sell drugs on the corner. You see lots of unwed parents pushing strollers. You see packs of youths hanging out all day on street corners, leaving only to buy more cigarettes or beer in a nearby store.

You see a lot of trash, a depressing amount of it, symbolic of a neighborhood that has given up on itself.

This is now, that was then

It wasn’t always this way. This mostly Irish area with some Italians always had problems with alcohol. There used to be taverns on every corner, sometimes one on each corner.

Nevertheless it was a tight-knit community. People watched out for one another. And even though they didn’t realize it, residents embraced the maxim, “It takes a village to raise a child.” If you did something wrong, even if your mom or dad was a mile away, you could be sure they would know about it by the time you got home. And that was after Mrs. O’Rourke gave you a piece of her mind herself.

People from the old days describe Grays Ferry as an idyllic place. Hard scrabble and blue collar, to be sure, but idyllic nonetheless.

That all changed in the latter part of the last century. Some say it was the forced integration of the neighborhood. What was an entirely white, Catholic enclave became 55 percent mostly Protestant African American to 45 percent white. Race riots were common.

Some say it was the arrival of drugs, usage of which became widespread around the same time. Today most families have a member who is addicted to alcohol or drugs, or in recovery.

Whatever the cause, the neighborhood has become one of the most impoverished in the city. Although property crime is reasonably low, Grays Ferry ranks as one of Philadelphia’s most violent sections, witnessing six murders last year.

A focus on prayer and the Mass

But just as it is always darkest before the dawn, good things are happening in Grays Ferry, largely centered around St. Gabriel Church.

And if St. Gabriel’s pastor, Norbertine Father Dominic Rossi, has his way, those good things will help transform the neighborhood, which even the most cynical observer agrees has a lot of potential.

When he arrived, Father Rossi’s first focus was the Mass. He has taken a personal role in selecting the hymns sung during the liturgy, ensuring that not they only uplift but focus worshippers’ attention on God. The purpose, he says, is so people will feel more comfortable addressing God when they’re at home alone, so that prayer becomes an ever-present part of their life.

He has also worked very hard on his homilies so congregants will leave feeling uplifted and as though they’ve been strengthened by God’s word as they go through the rest of the week.

On Sept. 8, 2015, he hired Immaculate Heart Sister Rose Marie Adams to serve as director of religious education, with a special emphasis on catechizing adults.

Then in October Father Rossi drew people in from his old parish of St. Norbert in Paoli to run the Alpha program, a 12-week Scripture study course. More than 50 people participated. That number, Father Rossi said, is “equal to 25 percent of those who worship on Sunday.” Many reported having encountered a connection to their faith for the first time.

Roughly 25 people participated in the follow-up program, Bishop Robert Barron’s “Catholicism” video series. Plans are to complete the course in the fall and in the meantime run another course for the summer.

Most recently Father Rossi invited a group called Mission Youth back into the parish. They had originally come last September to do some work with the parish school’s children during the visit of Pope Francis to Philadelphia. 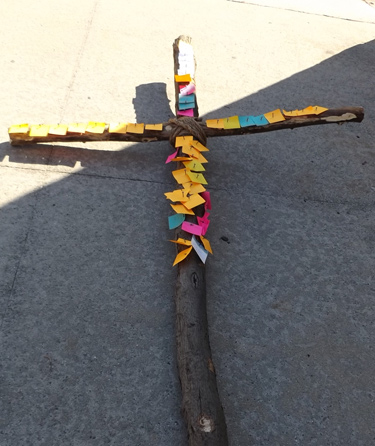 A handmade cross displays the prayers of people from the neighborhood, which were prayed for at a Holy Week liturgy at St. Gabriel Church.

This time the group of 50 mostly high school-aged youths came to pick up and carry their cross — literally. Mission Youth’s leader, Legionaries of Christ Father Justin Kielhorn, called Father Rossi and asked if his charges could come to the parish during the recent Holy Week.

The pastor agreed, and so went the group door-to-door in the neighborhood asking if residents had prayer intentions. They nailed the petitions to a large, homemade cross. Later that evening, the parish held a liturgy where the intentions were read and prayed for aloud.

All of this is part of the parish’s pastoral plan, whose ultimate goal is the revitalization of Grays Ferry, for which Father Rossi and a small group of parishioners gather to pray each month.

There are signs that all the hard work is paying off. Since Father Rossi’s arrival, he estimates there has been a 20 percent to 30 percent uptick in weekly Mass attendance. The number of African Americans in the congregation has increased as well.

“A little idea here, a little idea there,” he said. “That all fits into one pastoral plan to reconnect with the Lord Jesus. With God’s grace, we’ll see the fruit.”

One sign of that fruit is Jeannie Fitzgerald. In an “Is that odd, or is that God?” moment, when she decided to recommit to the Catholic faith of her childhood, she searched online for the nearest parish. Although St. Gabriel’s isn’t the closest to her home in South Philadelphia, it appeared as the top result. She has never looked back.

At this church, she says, “I feel as though I’m part of something bigger … with a sense of belonging I haven’t had in quite some time. The people have welcomed me since (the first day). This feeling of belonging is what prompts me to raise my hand or volunteer. That isn’t me, or should I say that wasn’t me. But it is now, and I owe that all to everyone in our parish.”

This is music to Father Rossi’s ears.

He is well aware of the financial burden involved in maintaining an aging church plant with a dwindling population. St. Gabriel’s is the only Catholic church left in a neighborhood that once supported two additional parish churches within easy walking distance of St. Gabriel’s front door.

Indeed, when Archbishop Charles Chaput celebrated Mass at the parish in February, the pastor made some none-too-subtle remarks in which he essentially urged, “Keep us open.”

“This is where Jesus is crying out, and our job is to recognize (the area’s residents) together, animate them together as the Body of Christ, so that we can be witnesses of God’s healing glory.” 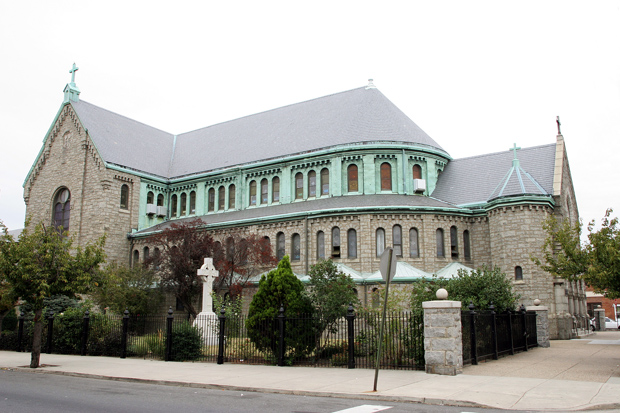 The grand St. Gabriel Church sits at 29th and Dickinson streets in Philadelphia’s Grays Ferry section, the last Catholic parish in the neighborhood that once was served by four.

NEXT: Local refugees recall peace in the Middle East, not long ago