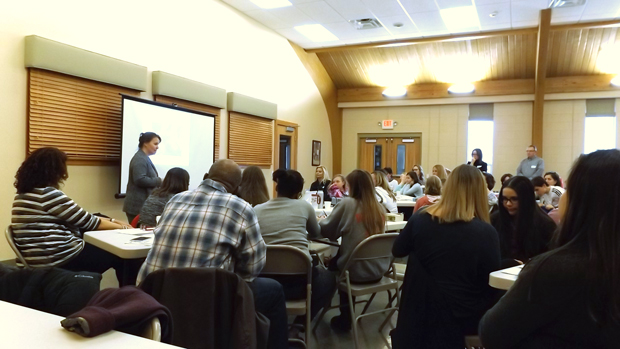 St. Thomas More Parish's Director of Religious Education Sharon Otto leads confirmation candidates and their parents in a session during a day-long retreat April 9 to prepare for receiving the sacrament. 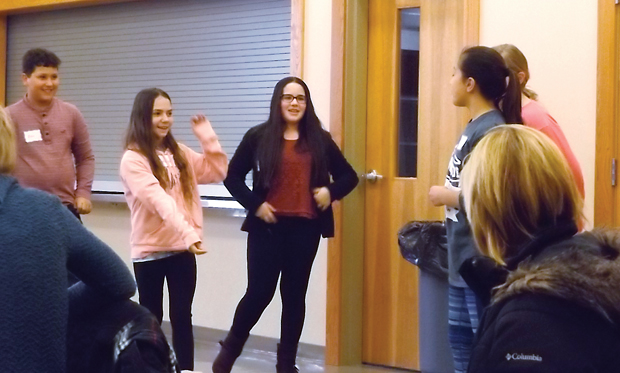 The unexpected falling snowflakes on Saturday, April 9, added a festive atmosphere of anticipation and fun for the retreat for confirmation candidates at St. Thomas More Parish in South Coventry, Chester County.

The readings for the Mass that began the day-long retreat seemed custom-chosen for the occasion. The account of the first deacons from Acts of the Apostles was fitting because of the emphasis on service — the word “deacon” comes from the Greek word diákonos, meaning “servant” — which is part of the preparation process for receiving the sacrament of confirmation.

That morning’s Gospel reading came from John, Chapter 6, where Jesus tells his disciples during the storm, “Do not be afraid.”

This is important, St. Thomas’ pastor Father Hugh Dougherty said, because the confirmation candidates need “to recognize they’ve been given the great gift of baptism, and the Spirit is being sealed into them, and that they’re enabled to share faith with others” and need to do so without fear.

After Mass and a light breakfast, Director of Religious Education Sharon Otto opened the retreat by examining the seven deadly sins and their remedy, the cardinal virtues. She illustrated her point by using a PowerPoint slide of characters from the popular and cartoon show, “SpongeBob SquarePants.”

For example of sloth, Otto pointed out an episode in which SpongeBob’s best friend Patrick wins an award for doing nothing for the longest period of time. Now, Otto noted, if one is resting from work on Sundays then lack of activity in this sense can be good. But if one is too lazy to get out of bed for Sunday Mass, that is definitely sloth and therefore sinful.

Since “God does not leave us alone,” Otto told the students and their parents, “he gives us the seven virtues to balance out the seven deadly sins.” She then explained the cardinal virtues and the theological virtues of faith, hope and love. 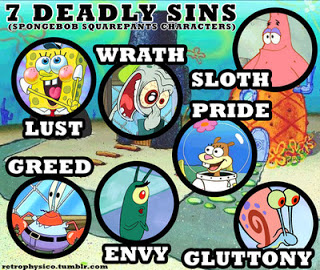 Of these, “only love will endure in heaven. The best place for you to experience mercy, which is another word for love, is in the confessional,” Otto said.

Just as Otto encouraged accessing the graces of the sacrament of penance in an age when lines for the confessional are often short, she, Father Dougherty, and their peers throughout the country face a struggle in getting Catholics to care about confirmation and other sacraments.

Only 60 percent of those attending Mass a few times or less per year thought it was very or somewhat important that their child receive confirmation.

For the Millennials just ahead of today’s young people, 30 percent find the sacrament of reconciliation meaningful to them, 48 percent say the same about confirmation, and only 51 percent believe the Eucharist is meaningful.

The good news is that when they get on their own, young adult Post-Millennials regularly attend church with much greater frequency. According to the March 23 issue of Dean & Provost, worship attendance was 41 percent “among Generation Z, compared with 18 percent for Millennials at the same ages, 21 percent of Generation X, and 26 percent of Baby Boomers.”

At St. Thomas More Parish, Otto she sees the rising trend of attendance playing out in the current class of confirmands.

“With this group, I see them at Sunday Mass, which is really good,” she said.

For his part, 12-year-old Blair McBride is excited to receive confirmation. He is eager to be a “full member” of the church and to participate in her life. Blair is already starting to notice his growth in the virtues, which he said is a fruit of asking for them in prayer.

His father John says he is pleased by how much his son has absorbed.

“He is very much a sixth grader,” John McBride said, “and sometimes I would get the feeling, ‘he’s just going through the motions. He’s not picking up some of these messages.’

“But then all of a sudden I would talk with him about some of these things, and it was like rattling off a textbook to me. So he really did absorb a lot of this material, which really pleasantly surprised me.”

Maureen Sheeler is another satisfied parent. She discovered how much her daughter, Taylor, had learned in PREP when reviewing with her the confirmation test.

“I was just astounded how many (questions) she could answer,” Sheeler said. “And not only just answer, but she could tell me why: ‘This is why I know this is right, mom.’ (It) was one of the best moments I ever had with my daughter.”

The St. Thomas candidates will receive confirmation April 22 at the church from retired Bishop of Erie Donald Trautman.

NEXT: On eve of Passover, local Catholics extend prayers to Jews