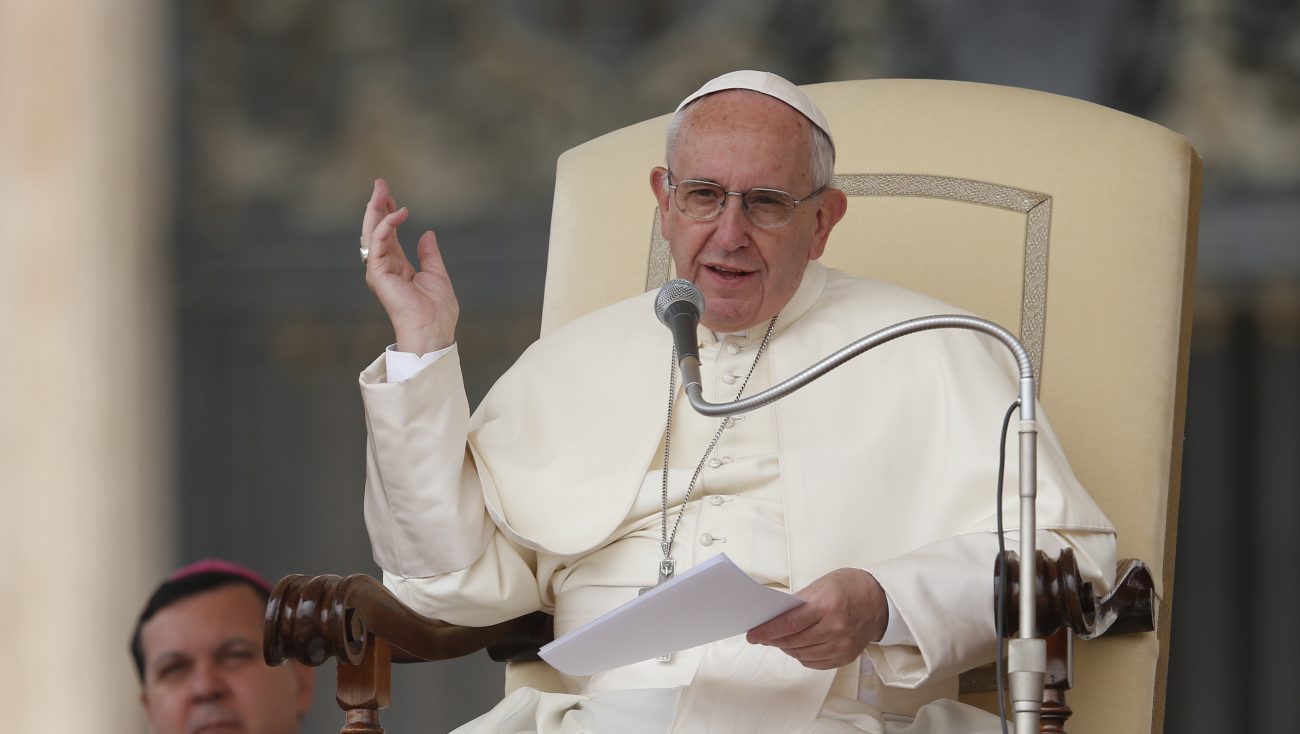 Pope Francis speaks during his general audience in St. Peter's Square at the Vatican May 11. (CNS photo/Paul Haring)

VATICAN CITY (CNS) — Salvation has nothing to do with the tidy business of bartering — earning God’s love in return for good behavior, Pope Francis said.

“If you do well you get a reward; if you do poorly you get punished. This is not the logic of Jesus,” whose ability to love and forgive is unconditional and infinite, the pope said May 11 during his weekly general audience.

The pope reflected on the Gospel parable of the prodigal son, which teaches everyone is a child of God not because of one’s merits or actions, but because of God’s “unchanging love and ready forgiveness.”

The father patiently waits for his sinning son and rejoices with a celebration when he returns home, the pope said.

Even though the son tells his father, “I no longer deserve to be called your son” because of the extent of his sins, the father immediately seeks to restore “the signs of his dignity,” because in his eyes, he never stopped being his child, the pope said.

No one can take away this dignity of being a child of God, “not even the devil,” the pope said.

The father responds to his repentant son with tenderness and love; he doesn’t say, “‘You’ll pay for this.’ No. The father embraces him, he waits with love.”

The parable also talks about the older son, who never strayed from the father and worked hard, obediently serving him.

This older son, however, lacks the tenderness and understanding of the father, and he speaks with disdain and resentment, the pope said.

“He only thinks about himself. He boasts about having always stayed by the father’s side and served him; and yet, he never lived this closeness with joy.”

“Poor father. One son left and the other had never been truly close” to him with his heart and love, the pope said.

The older son needs the father’s mercy, too, he said. The older son represents the self-righteous, he “represents us when we ask ourselves whether it’s worthwhile to work so hard and then we get nothing in return.”

“Jesus reminds us that you stay in the house of the father not to get compensation, but because you have the dignity of being a jointly responsible child. It’s not about ‘bartering’ with God, but following Jesus who gave himself on the cross.”

God only follows the logic of love and mercy — not the mindset of the younger son, who “thought he deserved punishment because of his sins,” or of the older son, who “expected a reward for his service,” the pope said.

The parable, he said, does not explain what happened between the two brothers, who can “decide to join in the father’s joy or refuse.” The fact that it is open-ended can inspire people to reflect on what they would do, he said.

The parable teaches that everyone needs to “enter in the house of the father and share in his joy, in his celebration of mercy and brotherhood.” He said, “The greatest joy for a father is to see his children recognize each other as brothers and sisters.”

It teaches people to open their hearts to be merciful like the father, and it offers encouragement to parents whose child has strayed onto dangerous paths, to pastors and catechists who wonder if their efforts are in vain, and to prisoners and all people who have made mistakes and believe they do not deserve forgiveness and mercy.

No matter what happens, “I must not forget that I will never stop being a child of God, of a father who loves me and waits for my return. Even in the ugliest of situations in life, God waits for me, God wants to embrace me, God expects me.”

PREVIOUS: What does the ‘internal forum’ have to do with divorced Catholics?

NEXT: Readings of the holy Mass – Pentecost Sunday