A rendering shows the proposed new parish center and gymnasium for St. Andrew Parish in Drexel Hill, which is celebrating its 100th anniversary. 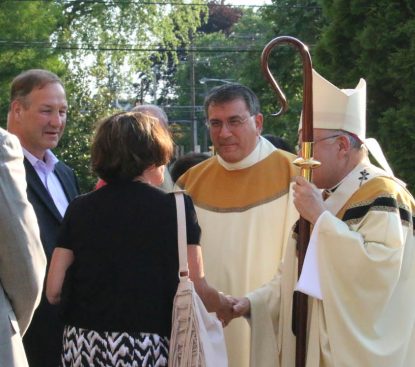 When Archbishop Charles Chaput visited St. Andrew Church in Drexel Hill on Saturday, June 25 to celebrate the closing Mass for the parish centennial he was visiting a site that was really the second choice for the parish campus.

In 1916 when Father Joseph McShain, the founding pastor, was directed by Archbishop Edmond Prendergast to obtain land for the new parish, according to parish historian Kate Paffett, he hit upon the estate of the late Anthony Drexel, where the mansion had burned down some years earlier.

Archbishop Prendergast liked the site so much he told Father McShain to find another one. Instead the archbishop bought it to build a new St. Vincent’s Orphan Asylum. The former orphanage in center city had been seized by the City of Philadelphia under eminent domain for the construction of the Benjamin Franklin Parkway and the orphan girls were temporarily marooned in Point Pleasant, New Jersey.

As for the orphanage it had a long and happy existence until it was ultimately closed and that site is now Monsignor Bonner and Archbishop Prendergast High School.

In the end Father McShain chose a new site for St. Andrew’s on School Lane where the parish remains to this day. A temporary chapel was quickly erected and this served until 1920 when a combination church school building was erected.

This was in keeping with archdiocesan policy at the time. Under Archbishop Prendergast and his successor Cardinal Dennis Dougherty the first permanent parish structure had to be a school except in sparsely populated areas.

Typically it would include a ground floor chapel/hall with classrooms on upper floors. Only when this was paid for was the pastor permitted to build a free-standing church.

This is exactly what happened at St. Andrew’s, where the parish population quickly grew.

When a Women’s Auxiliary was started the sisters helped by hosting cake sales, teas and luncheons. 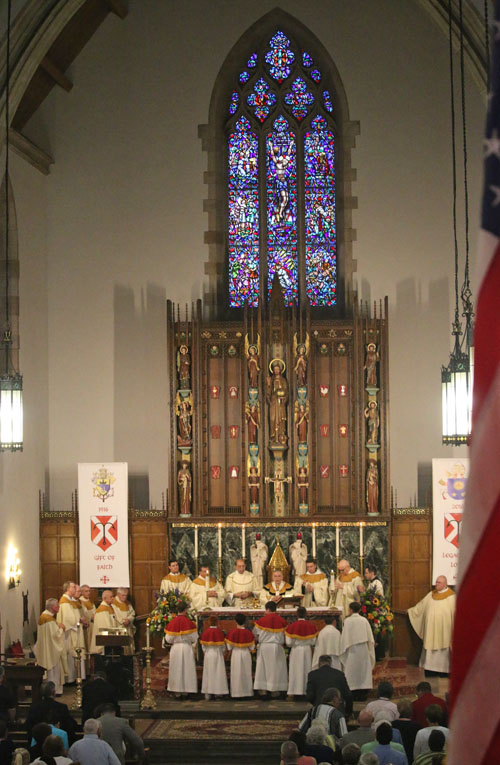 The interior of St. Andrew Church during the Liturgy of the Eucharist at the centennial Mass June 25, at which Archbishop Chaput was the main celebrant.

The school was expanded in 1928 and 1964. While St. Andrew School has a mostly lay faculty and administration today there is still a St. Joseph Sisters’ presence through three sisters.

With the school up and running Father McShain was able to start the erection of the permanent church but ensuing events intervened. Although it was dedicated in 1928 the church was capped at a much lower height than planned. It was the task of his successor, Father John Hughes, to see it to completion to its present height in 1962.

Starting with 55 families the parish has grown to approximately 1,500 today. Fundamental to St. Andrew Parish through the years has been the parish school, which peaked at over 1,000 students in the glory days of the 1960s.

But when Msgr. Albin Grous, the current pastor, arrived in 2008 that figure was down to about 230, and recommendations from the Blue Ribbon Commission set up by the archdiocese was that St. Andrew School and surrounding schools should combine as a regional school.

Msgr. Grous disagreed. He had very strong views concerning the importance of parish schools and a prior career in Catholic education to reinforce his views. With a doctorate from the Gregorian University in Rome he is a former dean at St. Cyril and Methodius Seminary in Orchard Lake, Michigan, and a former official with the Congregation for Catholic Education in the Vatican.

Father Grous aggressively supported the school, something that he is convinced is necessary for a pastor to do if the school is to survive.

One’s instincts would suggest there were neighboring school closings during those years, but a check of published figures shows the other two Drexel Hill parishes have schools that are also more than holding their own.

With that said, St. Andrew’s now attracts students from at least 15 different zip codes, but it will not take a student from another parish with a school without the permission of the pastor.

In these days of ever increasing tuition, many Catholic elementary schools in the archdiocese have a tiered system of tuition. Children of Catholic parents who attend and contribute to the collection have one tuition, Catholic children whose parents do not contribute may have a higher tuition and non-Catholic students may have an even higher tuition.

At St. Andrew’s the tuition is the same for everyone — at this time roughly $3,300. Msgr. Grous does not believe the tuition should be based on what the parents do or do not do; the purpose of the school is to educate according to Catholic principles.

Catholic identity is not based on being Catholic or non-Catholic. Just because a person has a baptismal certificate does not make them Catholic. 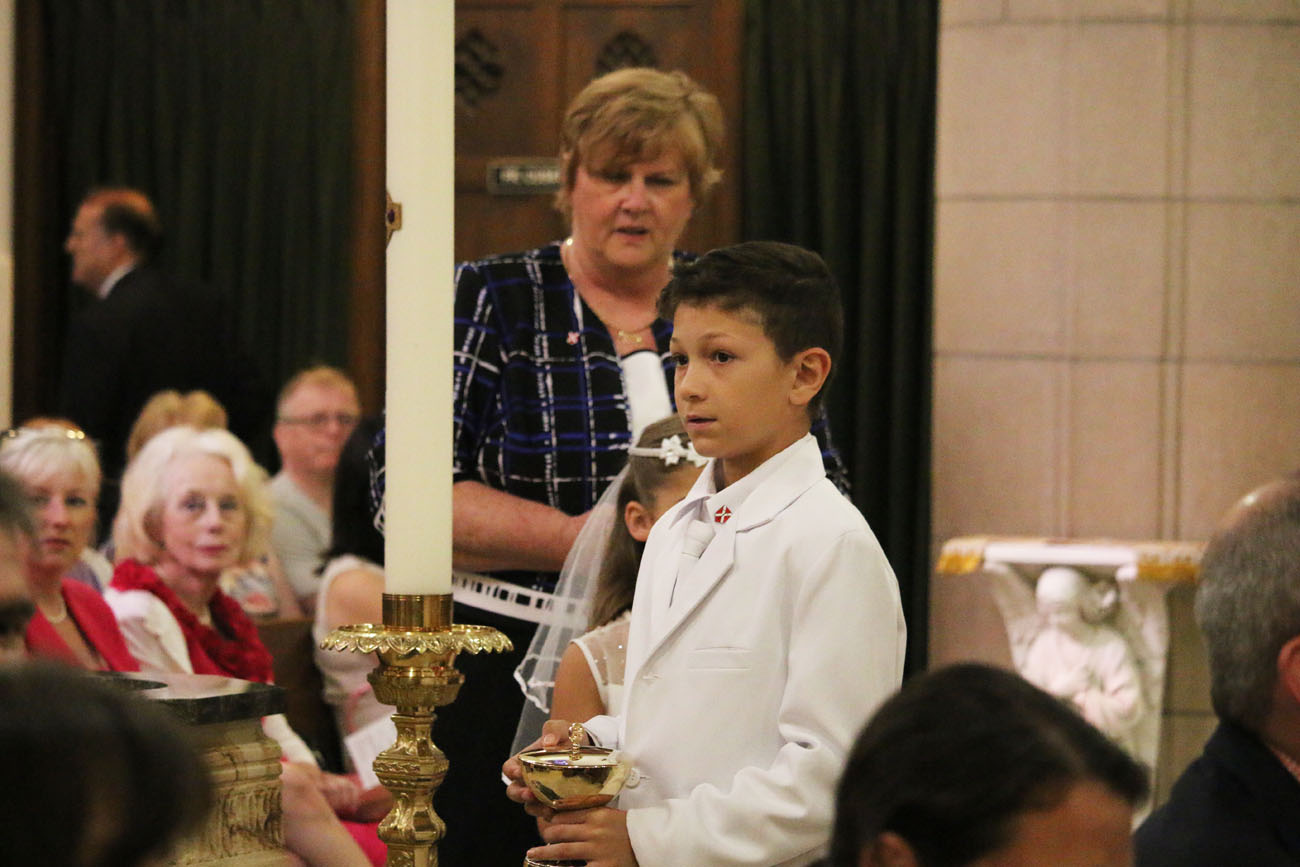 Children help bring up the offertory gifts during the centennial Mass.

“This is not a business; we are here to evangelize and educate,” he said. “The kids are happy and I personally believe we are fulfilling the mission of the church.”

On a more practical matter a uniform tuition makes sense according to Steve Litz, the parish business manager and a parishioner for 38 years. Higher tuition drives people away and it is more effective to fill the seats because the teacher’s pay is the same whether there are 15 or 30 children in the classroom.

The parish still must subsidize the school but as enrollment grows the subsidy diminishes. At this point the school is estimated to grow to 500 students in two years, at which point Litz believes a subsidy will be unnecessary.

Actually 500 is probably full capacity, given today’s standards that dictate smaller class sizes than previously. And there are rooms dedicated to programs that didn’t exist in past generations on the grade school level, such things as science and computer labs and other programs.

School principal Helen McLean, who joined the faculty straight out of college as a fifth grade teacher in 1978, said, “I absolutely love coming to work here every day, it is great. We have teachers I taught and we have students whose parents came here. A lot has to do with the vision of our pastor.”

One special feature is the foreign language program that all students participate in one session each week. Up through grade five it is Spanish and after that, thanks to Rosetta Stone computer technology, a student can continue with Spanish or switch to a menu of 22 different languages and study on an individual basis on school and home computers.

At this time St. Andrew Parish is conducting a campaign to build a gymnasium and parish center that can be utilized for the many spiritual and social ministries. Not the least of the newer ministries focuses on the aged.

This Eldercare Ministry with a paid staff member, thanks to an anonymous donor, works closely with archdiocesan Catholic Health Care Services to assist older members of the parish access the various community and health care resources that will permit them to age in place, staying in their home as long as possible.

Now at 100 years old, St. Andrew’s is there for its people no matter how young or how old. 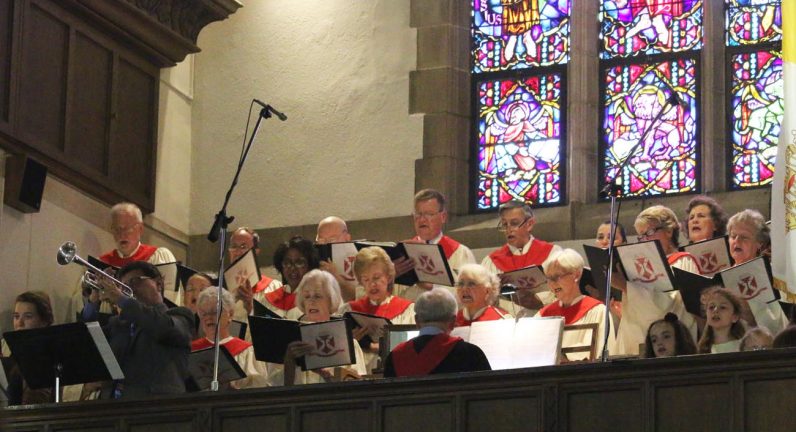 The St. Andrew’s choir, featuring adults, children and soloists, leads the congregation in song at the June 25 100th anniversary Mass for the parish.

NEXT: Our Lady of Port Richmond School receives $60K grant