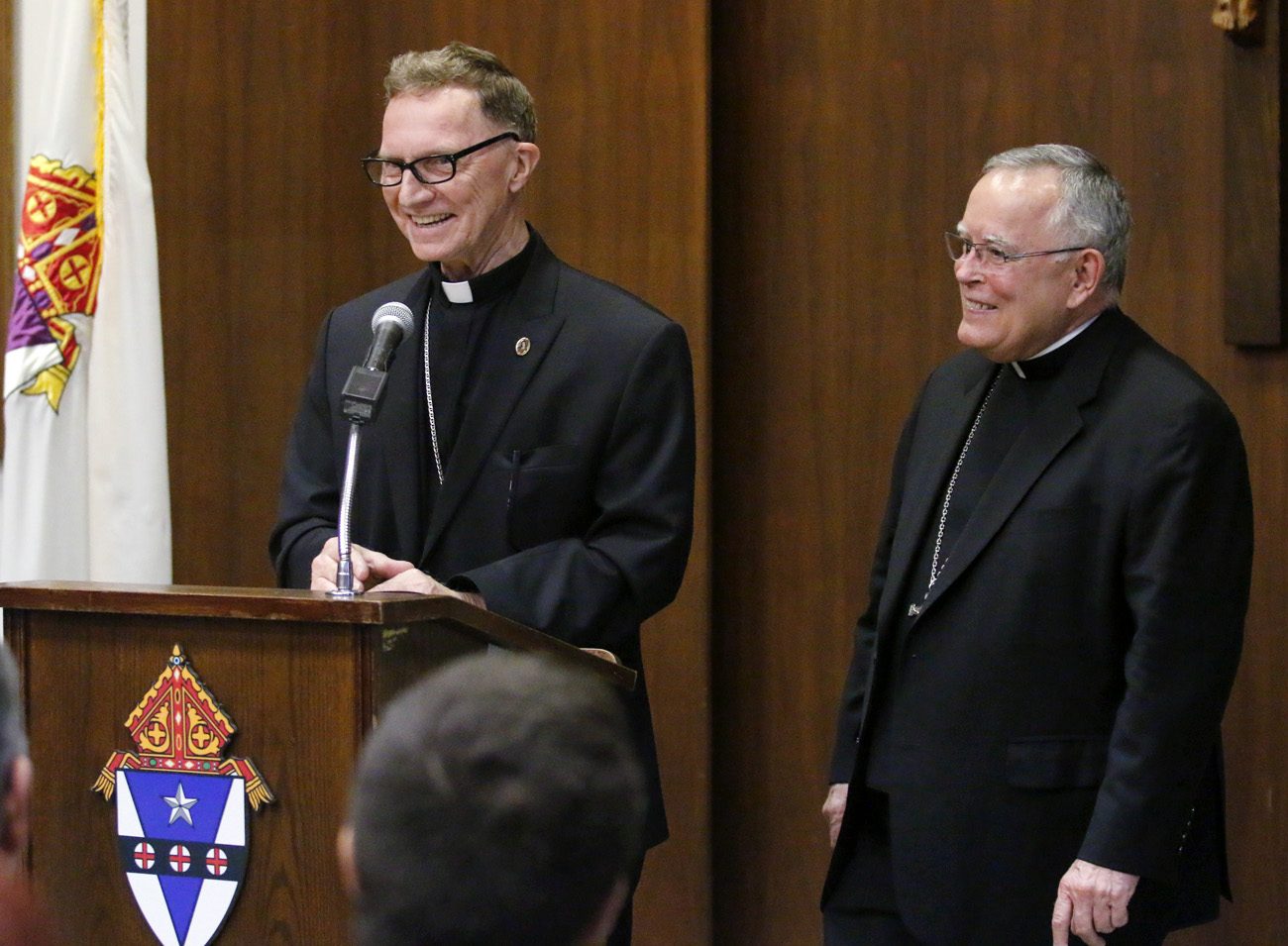 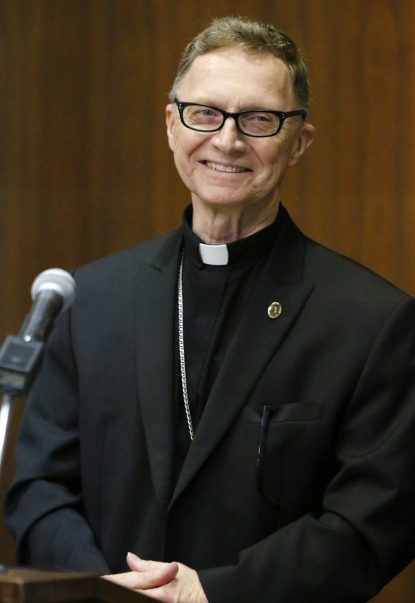 Bishop-elect Edward Deliman will be ordained an auxiliary bishop of Philadelphia Aug. 18 at the Cathedral Basilica of SS. Peter and Paul. (Sarah Webb)

Pope Francis has named Msgr. Edward M. Deliman as a new auxiliary bishop for the Archdiocese of Philadelphia, it was formally announced at a Tuesday, May 31 press conference by Archbishop Charles Chaput.

Bishop-elect Deliman, who is 69 and currently pastor of St. Charles Borromeo Parish in Bensalem, will be ordained a bishop at the Cathedral Basilica of SS. Peter and Paul on Aug. 18.

During his ministry since his ordination as a priest in 1973 by Cardinal Krol, he has served as an assistant pastor or parochial vicar in five parishes and pastor of five parishes, with most assignments including extensive ministry to Hispanic or Latino Catholics.

It was clear from the press conference that Latino ministry, including visitation around the archdiocese, will be his major work in the future, although the final details have not yet been worked through.

While all bishops are appointed by the Holy Father, it is usually done from qualified candidates proposed by the local bishops and passed on to the papal nuncio of a country and then to the Vatican.

“A large part of the church today almost everywhere in the United States is Spanish speaking, so that was a special focus of mine when I started looking around,” Archbishop Chaput explained at the news conference. “I was very pleased just a week ago yesterday that our Holy Father has appointed Msgr. Edward Deliman as the new auxiliary bishop. He is an extraordinary priest.”

Bishop-elect Deliman “has a special blessing in being immersed in the needs of the Latino community in the Archdiocese of Philadelphia, and other parts of the country are aware of that.”

In a statement, Archbishop Chaput said, “Pope Francis’ appointment of Bishop-elect Deliman continues a long tradition of priests from the Archdiocese of Philadelphia being recognized for their ability to serve as bishops. It also demonstrates the Holy Father’s confidence in Bishop-elect Deliman, who has served our archdiocese and its people with faithful dedication for many years. The new bishop-elect is a humble man who loves the priesthood and is tirelessly devoted to his ministry.”

“To say I’m humbled would inadequately express my feelings today,” Bishop-elect Deliman said in his remarks at the press conference, “but I truly am humbled. I am grateful to our Holy Father, Pope Francis, for allowing me to serve as an auxiliary bishop of Philadelphia.”

The news of his appointment, he said, “was a complete and unexpected surprise and it was certainly a lot to absorb and I certainly look forward to working with the archbishop in the weeks and months ahead as I figure out what this means and what I will be doing.”

Among the invited guests at the announcement were Latino representatives from the various parishes where he ministered.

“I’m grateful to you, my brothers and sisters, for your patience with me when I stumble with your language,” Bishop-elect Deliman said. “A smile and the language of love always seems to get me out of trouble.”

He also addressed his Latino audience in Spanish, which is very good, according to Kathia Arango, director of the archdiocesan Office for Hispanic Catholics.

“This is a wonderful time for the Hispanic community,” she said. “Knowing the many parishes Monsignor has worked with, he is preaching with faith and love. One thing he said in Spanish that he didn’t say in English was, Father Eduardo and it is important for you to know that.’ He has always been opening and welcoming to the Hispanic community.”

Father Christopher Cooke, who served as parochial vicar for two years when Msgr. Deliman was pastor of St. Martin of Tours Parish in Philadelphia, said, “It was a privilege to work with him and to learn from him from his being with the people in a pastoral way and being a good business person. The parish under his leadership came together; the key was his pastoral approach.”

Joaquin Herrera, a member of Philadelphia’s Cuban community, said, “I’ve known Msgr. Deliman since 1986. We had a Cuban Council Center and we would always celebrate our feast day of our patroness, the Virgin of Charity, wherever he was and he would say Mass for us. This couldn’t happen to a better person. I have known some very good priests, but he is excellent.”

Edward Deliman was born March 4, 1947 in Lorain, Ohio, to Margaret Deliman and the late Edward M. Deliman. He has two younger brothers, Michael and Francis, and four nieces and nephews.

The family relocated to Morrisville, Bucks County, and Holy Trinity Parish where he attended grade school before continuing on at Bishop Egan High School in Levittown.

He left Bishop Egan after his sophomore year in 1963 to enter St. Charles Borromeo Seminary, which at the time had an upper secondary school program in addition to the usual college and theology programs.

It was not a sudden decision. He had always had the thought of the priesthood in mind, although at first he considered entering the Passionists.

“My pastor, Father Joseph Gallagher,” Bishop-elect Deliman said, “told me, ‘You have to go to the diocesan seminary,’ He was a good man, so I did.”

Msgr. Stephen McHenry was also one of the 14 high school juniors who entered St. Charles Borromeo Seminary that year and he and Bishop-elect Deliman are two of the five who persevered to ordination a decade later.

“I’ve known him for 53 years,” Msgr. McHenry said. “He is a quintessential parish priest. He loves the Lord and he loves his priesthood. Years ago he learned Spanish and has continued his priestly ministry in the Hispanic apostolate yet he is very modest in terms of his own abilities.”

Bishop-elect Deliman “is someone I always thought would make a good auxiliary bishop,” Msgr. McHenry said, “especially in this time when Pope Francis is stressing bishops who have lived their lives among the flock. That is what Ed Deliman has done, yet I don’t think he ever desired to be a bishop. He wants to serve the Lord and he has done it in a quiet way. He sees the big picture and the little details, but doesn’t shine a light on himself.”

“When the archbishop asked the priests who they thought would be a good bishop, his was one of the names I submitted, and I think a lot of other priests did too.”

This was followed by a series of pastorates, all to parishes that had a significant number of Hispanics in their congregation. He was named pastor of St. Bonaventure, Philadelphia, in 1991. When that closed in 1993 he became pastor of Visitation B.V.M., Philadelphia; in 2003 pastor of St. Agnes, West Chester; in 2009 pastor of St. Martin of Tours, Philadelphia and in 2011 pastor of Our Lady of Fatima, Bensalem.

When Our Lady of Fatima was merged into St. Charles Borromeo, Bensalem, in 2014 he became pastor of St. Charles. He was named Honorary Prelate to his Holiness with the title Monsignor in 1991.

In secondary positions at various times he has been an approved advocate, Office of the Metropolitan Tribunal; associate director, Office for Youth and Young Adults; defender of the bond, Office of the Metropolitan Tribunal; spiritual director for seminarians, St. Charles Borromeo Seminary; mentor, Pastoral Leadership Institute and priest vocations coordinator, Chester County.

The auxiliary bishops also are responsible for groups of parishes in their episcopal region. They also confer the sacrament of confirmation in archdiocesan parishes.

Retired bishops do not have specific duties but generally, health permitting, they assist for example at confirmations or presiding at invited events.

NEXT: Counselors learn how to help women and men heal after abortion