Sales of illegal guns, and the boys they kill, focus of city prayer service 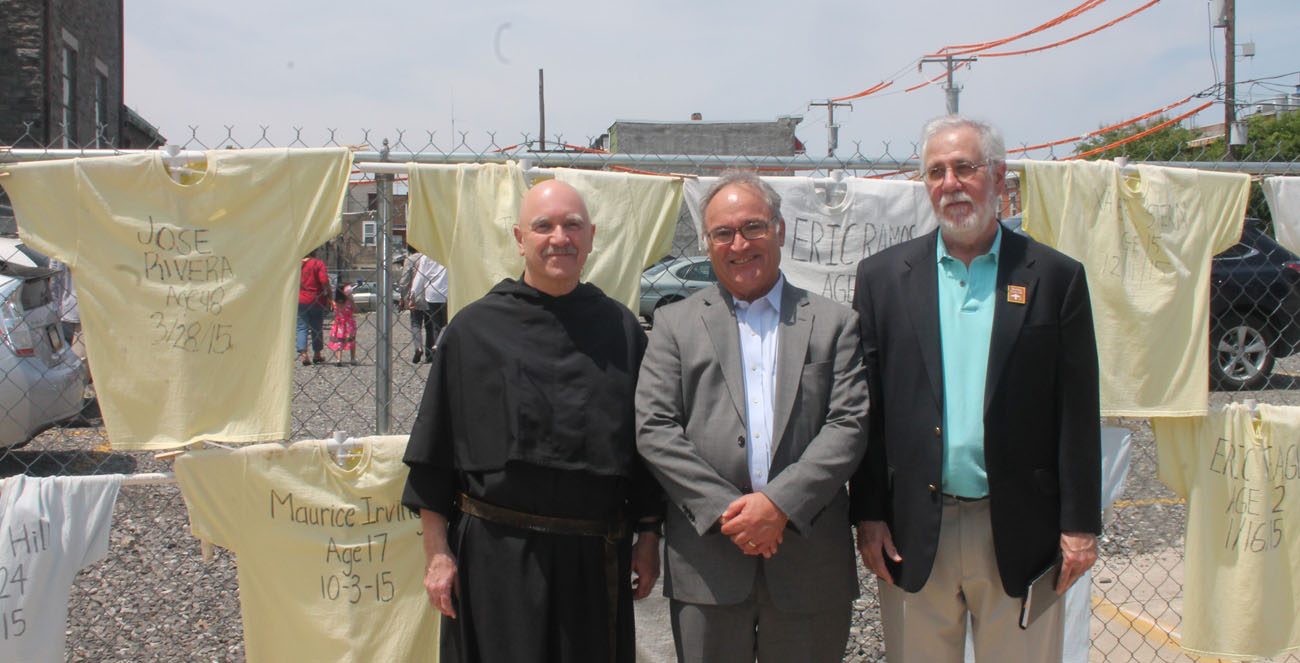 Standing at St. Rita's Shrine in Philadelphia in front of a line of T-shirts representing young men who have died from gun violence this year in the city are, from left, Augustinian Father Joseph A. Genito, shrine director; James Amato, secretary for archdiocesan Catholic Human Services; and Bryan Miller, founder of the group Heeding God’s Call to End Gun Violence, which helped organize a community event at the shrine May 25. (Photo by Lou Baldwin)

Jose, age 16. Maurice, age 15. Justin, age 7. The long line of more than 100 T-shirts stretched out and around the corner of the chain link fence by St. Rita of Cascia Shrine at Broad and Ellsworth Streets in South Philadelphia.

No, it wasn’t laundry day at a boys’ school.

It is part of a two-week campaign to highlight the problem of gun violence particularly as it pertains to trafficked guns, illegally obtained, which is the case with many street crimes.

As the T-shirts suggest, many of the victims are young boys cut down before they reach manhood.

The campaign formally opened on May 25 with an outdoor prayer service following the noon Mass at the Shrine of St. Rita. Augustinian Father Joseph A. Genito, director of St. Rita’s Shrine, conducted the short service.

“It is time to listen to the cries of the innocent people who are deprived of their property, their dignity, their feeling and even their lives,” Father Genito said. “We gather here today to do just that — to bring the memory of loved ones to mind so that those who can do something about it will listen.”

Father Genito called to mind the life of St. Rita, who he called a saint that “exemplifies the values of justice and mercy.”

St. Rita (1381-1457) lost her husband when he was murdered in a local vendetta. At his funeral she publicly forgave his murderers, and prayed her sons would not retaliate by continuing the feud. Her sons died of natural causes and she entered an Augustinian convent.

She became known for her passionate love of God and for the power of her intercessory prayers, to the point after her death she was referred to often as “the saint of the impossible.”

“Following the example of St. Rita, our perseverance in calling attention to the wrongfulness of violence and those who abet it by straw purchases can bring the end of the ongoing cycle of tragedy,” Father Genito said.

The campaign at St. Rita was cosponsored by Heeding God’s Call to End Gun Violence, a group founded by Bryan Miller, who was present for the prayer service.

“My brother was an FBI agent who was killed in Washington, D.C., with an illegal assault pistol, along with three other law enforcement officers,” he said. “That was in 1999.”

There were 238 gun murders in Philadelphia, from the start of 2015 until late May, through the use of illegally obtain guns, Miller said.

“After we leave here we will go to another church where we have room to put up all 238 T-shirts,” said Miller, who has made it his life’s work to end gun violence.

“The fact is we work with children who are exposed every day to violence and anything we can do to make their lives more safe, more prosperous, is something we have to be involved with. We need to be behind Father Genito and support him in this work.”

PREVIOUS: Counselors learn how to help women and men heal after abortion

NEXT: Catholic newcomers to Philadelphia raise their prayers — not only in English