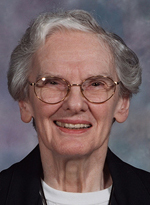 Sister Eleanor Augustine (Helen Marie Beckman) was born in Philadelphia where she was a member of St. Ludwig Parish and a graduate of John W. Hallahan Catholic Girls’ High School. After entering the congregation in 1947, she earned a bachelor of arts degree in biology from Villanova University and a master of science degree in chemistry from Fordham University.

She ministered primarily in education and spent many years teaching science.

Sister Eleanor Augustine ministered for 41 years in the Archdiocese of Philadelphia and taught at Little Flower High School, St. Maria Goretti High School, and West Catholic High School. In 1965 she began teaching at Neumann University and continued her ministry there for 28 years.

Sister Eleanor Augustine spent both her early years and her later years in active ministry in the Diocese of Wilmington. She taught in Corpus Christi School from 1953 to 1955. After retiring from teaching, she returned to Wilmington and worked as a receptionist at St. Francis Hospital for 15 years.

Her funeral Mass was celebrated June 2 at Assisi House. Burial was in Our Lady of Angels Cemetery in Aston. Sister Eleanor Augustine is survived by her cousin, Eleanor Warner, and by her Franciscan family.

PREVIOUS: Franciscan sister, an educator and parish minister, dies at 92