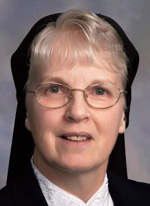 Immaculate Heart of Mary Sister Jeanne Patricia Crowe, 64, died May 30 at her family home in Norristown. She was in the 45th year of her religious life.

Born in Philadelphia, Sister Jeanne Patricia entered the Congregation of the Sisters, Servants of the Immaculate Heart of Mary in 1970 from St. Helena Parish in Centre Square.

She taught in elementary schools in the Archdiocese of Philadelphia. Sister Jeanne Patricia received her doctor of pharmacy degree at the Philadelphia School of Pharmacy. She was a pharmacist at Camilla Hall and at Continuing Care RX in Norristown.

Sister Jeanne Patricia went on home care for her mother in 2010.