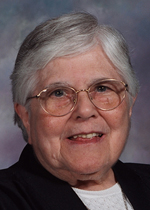 Sister Mary Rita was born in Baltimore, Md., where she was a member of St. Clement Mary Hofbauer Parish and a graduate of the Catholic High School of Baltimore. She entered the congregation in 1953 and professed her first vows in 1955. Sister Mary Rita earned a bachelor of arts degree in English from Neumann University and a master of arts degree in religious education from Princeton Theological Seminary. She ministered primarily in education, congregational administration, and health care.

Sister Mary Rita ministered for 50 years in the Diocese of Trenton. She began her years in ministry taking care of children at St. Michael Home in Hopewell. She later taught at St. Joseph School in Raritan, N.J., as well as Holy Angels School and Blessed Sacrament School, both in Trenton.

From 1972 to 1989 Sister Mary Rita served in administration with the former St. Anthony Province of the Sisters of St. Francis which was based in the Trenton area. She first served as a member of the provincial council, then as assistant provincial, and finally as provincial.

Additional ministry experience included teaching at Our Lady of the Assumption School in Lynnfield, Mass.

In 2005 Sister Mary Rita moved to Assisi House, the congregation’s retirement residence, where she served in prayer ministry until her death.

Her funeral Mass was celebrated May 31 at Assisi House in Aston. Burial was in Our Lady of Angels Cemetery in Aston.

Sister Mary Rita is survived by her sister, Patricia Barbernitz, nieces and nephews, and members of the Sisters of St. Francis of Philadelphia.