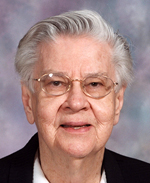 Sister Theresa Mary earned a bachelor of science degree in English from Villanova University and a master of arts degree in theology from St. Charles Borromeo Seminary. She ministered primarily in education in elementary and secondary schools.

She served in the Archdiocese of Philadelphia for 43 years and taught at St. Hubert High School and Bishop Conwell High School. When she retired from teaching in 2001, she moved to Our Lady of Angels Convent in Aston where she volunteered in various congregational offices. In 2010 she moved to Assisi House, the congregation’s retirement residence, where she served in prayer ministry.

Her funeral Mass was celebrated June 14 at Assisi House. Burial was in Our Lady of Angels Cemetery in Aston.

Sister Theresa Mary is survived by her nieces and nephews, and by her Franciscan family.

PREVIOUS: Franciscan sister, principal and teacher for more than 60 years, dies at 88