On racism, moral leadership needed not just from presidents but all citizens 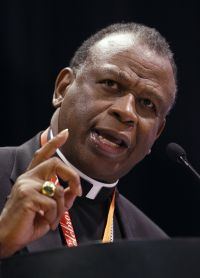 As a citizen of this country, as a Catholic priest and bishop, and as an African-American, I am deeply distressed by the recent violent eruptions of the racial divide in the United States.

Last week, I served as the Catholic chaplain during Week Three of the nine-week summer session at the historic Chautauqua Institution. “Moral Leadership in Action” was the week’s theme. There could not have been a more urgent topic considering the presidential election, young people slaughtered in an Orlando, Florida, club, people of color killed in encounters with law enforcement and the assassination of police officers by deranged gunmen.

As the Republicans and Democrats hold their conventions to nominate their candidates for the office of president, the American people are reaching the point when they must decide for whom they will cast their ballots in November. They surely want moral leadership in action. But, for many, this is a very difficult decision, since neither candidate enjoys enormous popularity with the electorate.

One way of simplifying the decision is to focus on a single issue and say, “I will vote for the candidate who shares my views on immigration, or national security, or abortion, or racial justice, or international trade, or terrorism, or health care, or Supreme Court appointments or raising taxes. Period! Even if I dislike or disagree with a candidate, I’m a single-issue voter.” For those who are not, the decision may be more difficult.

In a similar way, the American people are confronted by the daily reminder that the racial divide in the United States is widening. The most recent New York Times/CBS News poll concluded that 60 percent believe the relationship between people of different races is becoming worse, an increase of 38 percent since last year.

Critics of “Black Lives Matter” have called the movement “cop killers,” “racists” and “domestic terrorists.” Critics of “All Lives Matter” have branded this as an effort to turn attention away from the unique traumatic suffering of African-American people. But, must it be either one mantra or the other? Can it not be both?

We know the vast majority of police are fair-minded and respect the human dignity and worth of all citizens. Some, however, are not and do not. There is documented evidence that bias and racial prejudice influence the attitudes and actions of some police officers.

The very next day, July 7, shots rang out in Dallas during a peaceful protest, and a sniper slaughtered five officers. On July 17, three more officers were murdered in Baton Rouge. Both murderers, African-Americans, were killed by police.

We all know that the work of police officers is very difficult and very dangerous. They leave their homes each day not knowing if they will return unharmed. They deserve our respect and gratitude.

It is a grief that cannot be spoken and a pain that does not end. President Obama, his face and voice revealing his personal anguish in the face of yet another mass murder of police, said after the Baton Rouge shootings, “Attacks on our police are an attack on all of us and the rule of law that makes society possible. … We don’t need inflammatory language. … We need to temper our words and open our hearts — all of us.”

DeRay Mckesson, 31, has given voice to the racial divide as a Black Lives Matter leader. He was arrested during a peaceful protest in Baton Rouge following the shooting death of Alton Sterling and was unable to be with us at Chautauqua. In his place, former United Nations Ambassador Andrew Young; Atlanta’s Ebenezer Baptist Church’s pastor, the Rev. Raphael Warnock, and his wife, Ouleye Ndoye; and journalist Bill Moyers engaged in an energetic debate about the Black Lives Matter movement.

Former Ambassador Young, 84, an elder statesman of the civil rights movement, expressed serious concerns about Black Lives Matter. With his usual candor, he said Black Lives Matter was self-centered, disorganized and lacked a clear focus. He argued that no one really knows what the movement supporters want.

Young said that when Dr. King staged a protest march, it was always for a specific purpose and city officials were informed in advance. This is essential for safety, which Black Lives Matter ignores. This can lead to violence and deadly accidents.

Rev. Warnock and his wife responded that the movement is young and unstructured and will grow and mature over time. But it should not be dismissed. Nor should it be blamed for the violence against police.

They asserted that Black Lives Matter is concerned about many of the same issues that concerned Young in his youth. “When Dr. King said that the Negro will not be satisfied until police brutality is ended, that was his way of saying Black Lives Matter,” the two said.

After the ambush and murder of three Baton Rouge officers, Mckesson said, “My heart goes out to the families of the police who were killed in Dallas and Baton Rouge. … The movement began as a call to end violence and that call remains true today, that we fight for a living, breathing justice. …

For there to be some compatibility between the two expressions, however, it is necessary to acknowledge the legitimacy of the particular concern for the lives of people of color. This is not something all Americans recognize.

If I am secure in my comfortable home with my family on a cold winter night with the fireplace burning and more than enough to eat, my life matters. But the doorbell rings and there is a shivering, starving homeless family at the door in dire need of food and shelter. I tell them to find a shelter.

They respond, “Our lives matter.” I say, “So does mine and my family’s.” But I quickly realize that, in that instance, it is their lives and not mine that are in peril.

If you simply say, “All Lives Matter,” there is a danger of falsely implying that every group of Americans is facing the same degree of peril that then makes it possible to ignore or deny pressing issues like the frequent violent and fatal treatment of African-Americans in the face of minor or suspected misconduct. They seem to be tried, convicted and sentenced to death on the streets.

This should also mean that Black Lives Matter should not be silent about the significant number of young African-American males who die at the hands of other African-Americans or the alarmingly high number of abortions that bring abrupt ends to nascent black lives that matter.

There also must be a repudiation of any form of violence against white people, specifically, police officers. Ultimately, there must be at least a tacit recognition that there are other vulnerable, marginalized groups in the country whose lives also matter.

Elie Wiesel, 87, died July 2. The Nobel Prize laureate and survivor of Buchenwald and Auschwitz is best known for his tireless efforts to call the world’s attention to the horrors of Jewish suffering during the Nazi Holocaust. “Jewish Lives Matter!” At the same time, he was a champion of the human rights of suffering and oppressed people around the world.

On July 8, the day after the Dallas shootings, Baton Rouge police officer Montrell Jackson, 32, an African-American and one of three officers slain in the July 17 ambush, left the world this moving message: “I’m tired physically and emotionally. … I swear to God I love this city, but I wonder if this city loves me. In uniform I get nasty hateful looks and out of uniform some consider me a threat.

“I’ve experienced so much in my short life and these last three days have tested me to the core. … I personally want to send prayers out to everyone directly affected by this tragedy. These are trying times. Please don’t let hate infect your heart.”

Every Catholic knows from the life, death and resurrection of Jesus Christ that all lives matter. However, a hasty assertion of this universal truth obscures the sad truth that people of color have often not been included as a part of “all lives.”

Tragically, this goes back to the Declaration of Independence that makes no mention of people of color because Thomas Jefferson’s tortured, complex and contradictory paragraph on the “buying,” “owning” and “selling” of free human beings was deleted from the final draft.

Moral leadership in action: We need this not only from the sitting and future president of the United States. We need it from every citizen. We need it from law enforcement, gun legislation supporters, protest groups, the media, civic and religious leaders, including the Catholic Church, educators, mental health specialists, businesses, coaches, parents and extended families and parish communities.

To provide moral leadership in action, we must all think, listen, learn, pray and act in order to exercise what Robert K. Greenleaf has aptly called “servant leadership.”

In a time of the breakdown of a sense of togetherness among people, there is an acute need for a new authenticity. The moral authority needed to bring fragmented factions together can only come about if those in diverse positions of leadership are open to an attitude of genuine service to individuals and groups holding divergent points of view.

When individuals bring the openness, understanding, humility and compassion to their positions of leadership, the potential for establishing or re-establishing community is significantly increased. This, in turn, makes it possible to move toward consensus and conversion of hearts.

It may be that it is only by committing ourselves to praying, listening, learning, thinking and acting in the presence of the Holy Spirit that we will be able to demonstrate moral leadership in action as servant leaders showing, without ambiguity, that all lives really do matter!

Bishop Edward K. Braxton is the bishop of the Diocese of Belleville, Illinois. His pastoral letters on the racial divide in the U.S. and on the Catholic Church and the Black Lives Matter movement are available at www.diobelle.org.

NEXT: How the Supreme Court’s work became politics by another name