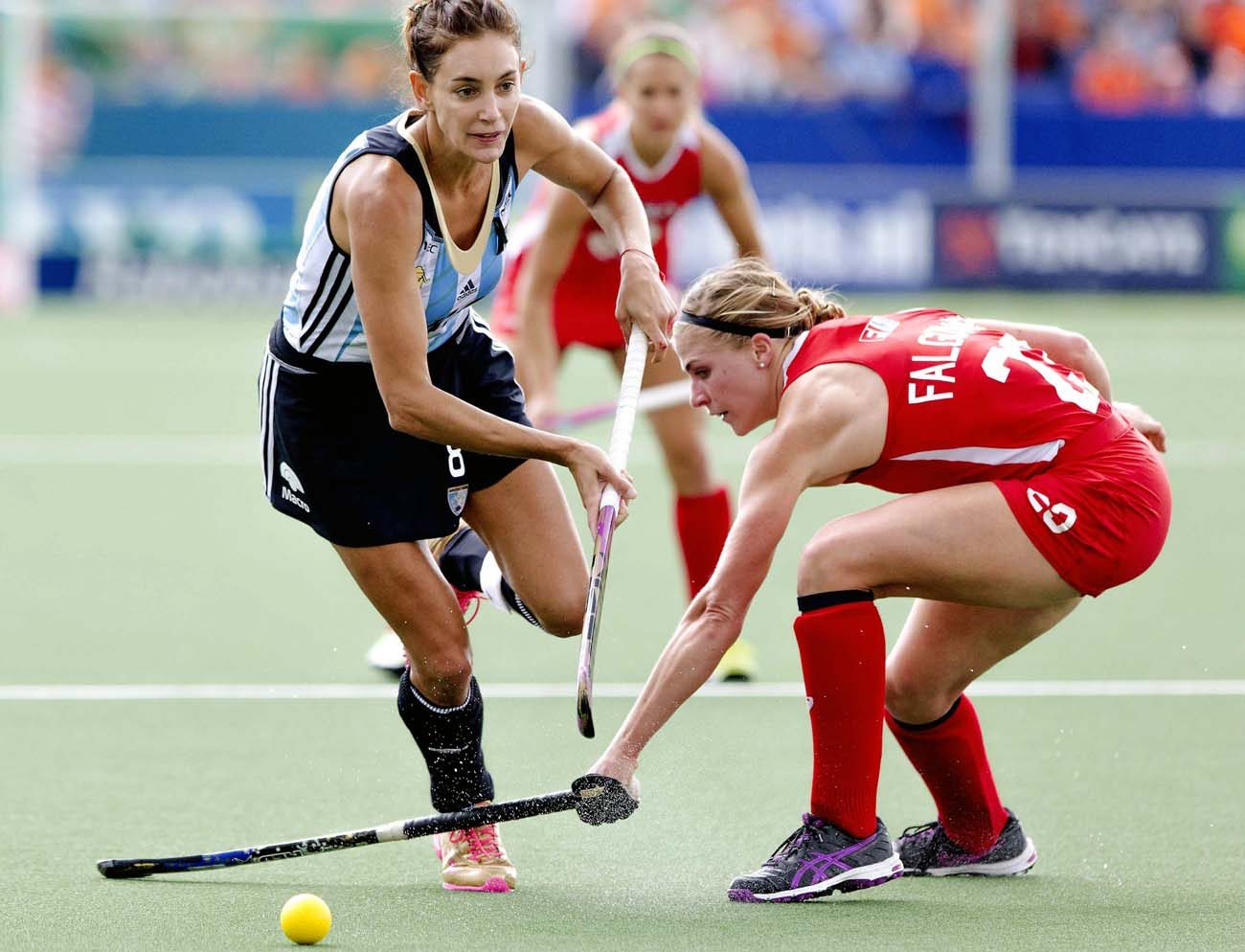 Katelyn Falgowski, right, is seen during the 2014 Field Hockey World Cup in The Hague, Netherlands. The 27-year-old graduated from St. Mark's High School in Wilmington, Del., and is going to Rio de Janeiro as part of the U.S. women's field hockey team. (CNS photo/Sander Koning, EPA)

“At the time, the high school one is awesome, and at the time, there’s no other thing than the NCAA, and now the Olympics is something you can’t even … it’s unimaginable,” she told The Dialog, newspaper of the Diocese of Wilmington, Delaware. “We’re going to take it day-by-day and game-by-game, but I can tell you that I’m a happy crier, so there will be a lot of happy tears if we do how we’re hopeful of doing.”

Falgowski, a 2007 graduate of St. Mark’s High School in Wilmington, is going to Rio de Janeiro as part of the U.S. women’s field hockey team. It will be her third Olympiad, following Beijing in 2008 and London four years ago. The 27-year-old is one of the most experienced players on the national roster.

But, she said, it feels like new each time.

“Every time you get to share it with a different group of girls. It can be the same core, but every time there’s something new. The first time I was so wide-eyed and excited just to be there. The second time around, we had high hopes and we fell short of where that was,” Falgowski said. She spoke to The Dialog following the United States’ 3-2 win over India in a pre-Olympic match July 18 at the Americans’ home base, Spooky Nook Sports in Manheim, outside Lancaster.

“I guess as a kid you always wish and hope that you’ll end up on the big stage, but it’s something that you never think is going to happen. To be able to do it as many times as I have now, it’s unbelievable,” she said.

Falgowski’s international experience is vast. In 2006, just before her 18th birthday, she became the youngest player to compete for the United States at the World Cup, which was held in Madrid.

Falgowski has more than 250 international appearances since, including gold medals from the 2011 and 2015 Pan American Games and the 2014 Champions Challenge. She has played with the national team all over the world, including Scotland, Russia, Ireland, the Netherlands, New Zealand and even Azerbaijan, in addition to the two previous Summer Olympics.

In 2011, Falgowski was nominated for the International Hockey Federation Young Player of the Year Award and the collegiate National Field Hockey Coaches Association Division I player of the year. She was named the player of the tournament at the NCAA national championship, in which her team, the University of North Carolina, was the national runner-up.

In her five years at North Carolina, the Tar Heels appeared in four NCAA title games, winning two; Falgowski missed the 2010 season with a concussion. She was a first-team all-American twice and second-team once. Her number 23 was retired by North Carolina in 2012.

The United States is currently ranked fifth in the world.

“I think this team is really good when we take things one game at a time, and I think we’re confident in ourselves, and we’re definitely hopeful that we can put together 60 minutes every game,” Falgowski said. “We’re a team who won’t quit, and that’s one of our greatest strengths.”

As she approaches her third Olympic Games, Falgowski has become one of the more recognizable American players. Following the game against India, her autograph was among the most requested from young fans.

She said pride and desire help keep her going.

“It’s a pride that you feel within yourself and with your teammates that you can’t explain. You love what you do, and I think that’s why you wake up every day and want to do it. Some people are meant to be in the business world, some people are taking care of animals, and I think this group of girls, we’re meant to be playing field hockey right now. It’s a special group we have.”

Falgowski is the youngest of four siblings, including three girls, all of whom attended St. Mark’s. Her parents, Ken and Cindy, and brother Tim will be in Rio, as will her fiance.

Falgowski, who, despite the Pennsylvania upbringing always referred to herself as “a Delaware girl,” looked back fondly on her time at St. Mark’s.

“I owe so much to that school for allowing me to play on the national team at the same time, to honor my commitment to play in a world cup while I was there. I just cannot say enough about the family community that they rallied around me,” she said.

Falgowski last traveled to St. Mark’s a few summers ago for a faculty barbecue. She hopes the next visit includes an Olympic medal hanging around her neck.

Lang is a reporter for The Dialog, newspaper of the Diocese of Wilmington.

NEXT: Piazza acknowledges his Catholic faith at Hall of Fame induction