Jesus’ mercy extends to even the greatest of sinners, pope says 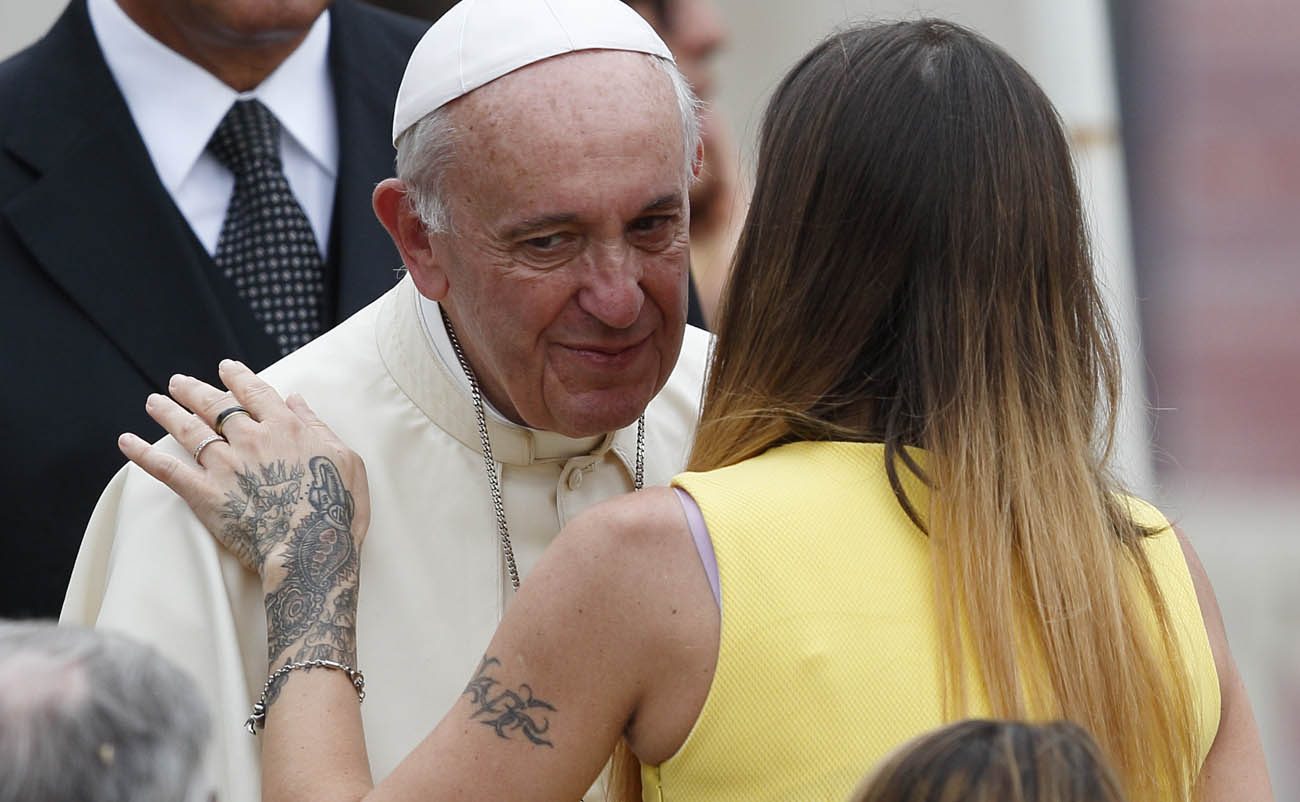 Pope Francis greets a woman with tattoos as he meets the disabled during his general audience in St. Peter's Square at the Vatican Aug. 31. (CNS photo/Paul Haring)

VATICAN CITY (CNS) — Jesus’ loving gaze of tenderness and mercy extends to all who seek forgiveness no matter how great or small their sins may be, Pope Francis said.

While many often feel “cast aside” because of their sins, Jesus offers encouragement and “tells us, ‘Courage, come to me,'” the pope said Aug. 31 at his weekly general audience.

“It is the moment of forgiveness, of inclusion in Jesus’ life and the life of the church. All of us are sinners; whether great or small, we all are. The Lord tells us, ‘Courage, come, you are no longer discarded. I forgive you, I embrace you.’ This is mercy,” he said.

Reflecting on the Gospel reading of Jesus’ miraculous healing of a woman suffering from hemorrhages, Pope Francis noted the woman’s persistence in trying to reach out to Jesus despite the fact that she was excluded from society because of her condition.

“She was a woman discarded from society. It is important to consider this condition — discarded — to understand her state of mind,” he said. “She senses that Jesus can free her from her sickness and from the state of marginalization and indignity in which she has found herself for years. In short, she knows and feels that Jesus can save her.”

Through the Gospel story, he said, “we, including Christian communities, are warned against views of women affected by prejudice and suspicion, damaging their inviolable dignity.”

The Gospel vision, he added, restores the truth and allows women to be viewed from “a liberating perspective.”

“We don’t know her name, but the few lines in which the Gospel describes her encounter with Jesus outline an itinerary of faith capable of restoring the truth and the greatness of each person’s dignity,” he said.

After touching Jesus’ cloak, the woman tried to hide and expected to be reproached, the pope said. Instead, she was met with his gaze of “mercy and tenderness” that not only welcomes her, but also “acknowledges her dignity.”

This gaze and encouragement from Christ, he added, also is experienced by all those who feel discarded and marginalized by their own sins.

The woman is not saved by touching Jesus’ cloak but by his words which “consoled her, healed her and restored her to a relationship with God and with her people,” Pope Francis said.

“Once again Jesus, with his merciful behavior, shows the church the path it must take to reach out to every person so that each one can be healed in body and spirit and recover his or her dignity as a child of God,” the pope said.

PREVIOUS: At the heart of love: Emptying yourself of self-concerns

NEXT: Love one another ‘as is,’ not as we’d prefer