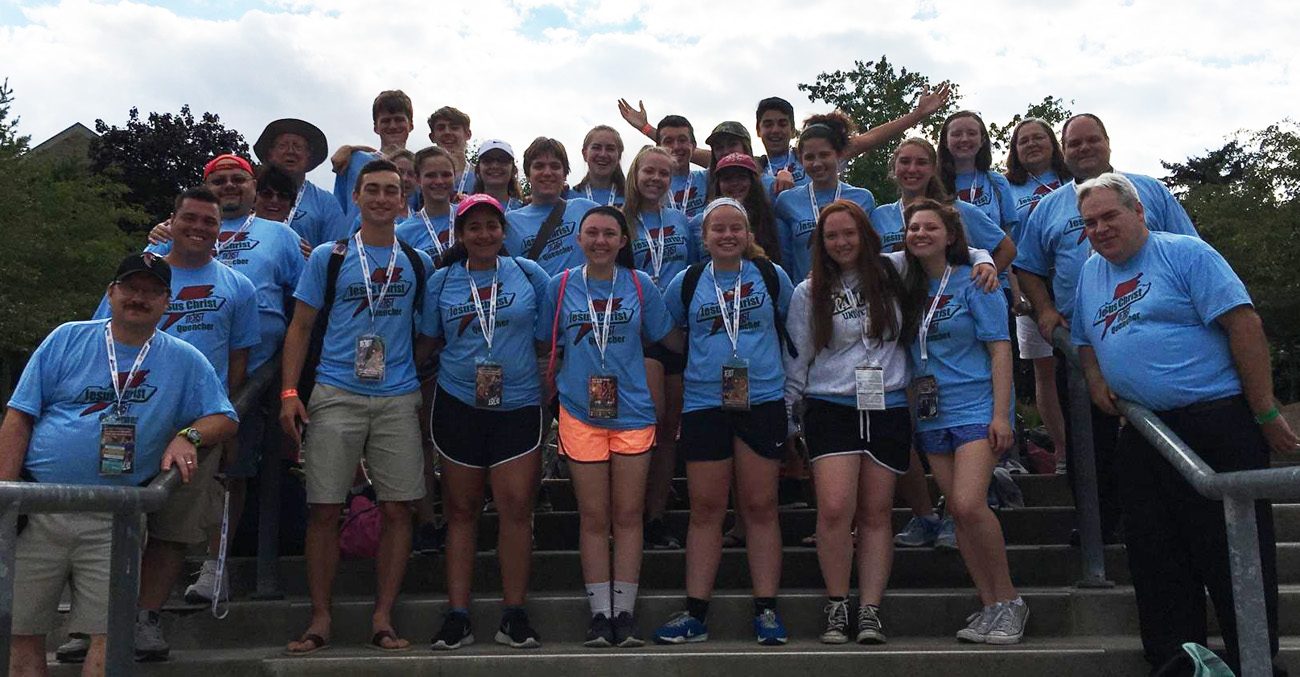 The youth group from St. Aloysius Parish in Pottstown enjoys the campus of Franciscan University at the summer conference in Steubenville, Ohio. 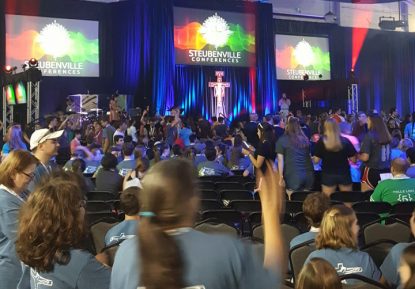 Participants at the youth conference praise God enthusiastically during one of the talks.

Faithful young pilgrims from St. Aloysius Parish in Pottstown, including members of the parish youth ministry program, are still basking in the glow of their trip to Steubenville, Ohio and one of Franciscan University’s renowned summer conferences.

Every year the Catholic university hosts five youth conferences on its main campus with each attracting approximately 2,000 people, bringing the annual attendance to around 10,000. Additionally, 18 regional conferences are held across the United States and Toronto, Canada.

During the summer months, teenagers are usually asleep at 8 in the morning. It was a different story on Friday, July 8 as those preparing for the conference made their way to the Gathering Center at St. Aloysius Church with sleeping bags, pillows and duffle bags in hand and ready for the five-and-a-half-hour bus ride to Steubenville.

But first they began the day with Mass at 8:30 a.m., a suitable way for the teens to start the weekend as the Steubenville conferences focus very much on the Eucharist.

“It is meant to focus them on the sacraments, especially the Eucharist,” said Father Paolino. “It helps to gather and prepare for the retreat.”

When the bus pulled up to the parish grounds, participants loaded their gear, climbed aboard and made themselves comfortable for the trip. Before departure, Father Steve led a prayer for the journey. 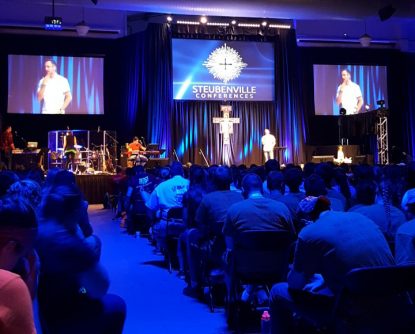 Colored lights set a reflective mood during a session at the youth conference.

While it was a long drive, everyone found ways to pass the time. Students enjoyed a continental breakfast, watched movies, prayed for safe travels and socialized. The group made a quick stop for lunch so that students could move around and energize themselves for the conference.

“I passed the time on the bus mostly with idle conversation,” said Raeanna Woodall, a senior at Pope John Paul II High School. “We always had a movie playing. The bus ride was never unbearable because we always had things to do and people to talk to.”

Upon arriving the group was greeted by friendly members of the university staff and received a tour of the campus before being given room assignments and settling in at the dormitories. After dinner on Friday, it was time to move on to the opening session in the university’s Finnegan Fieldhouse.

Brian Kissinger, director of student life for Franciscan University’s Study Abroad program, hosted the conference. He emphasized how hope is essential in a culture that, he said, has lost its sense of purpose.

“It was full, very loud and prayerful,” said Tatiana Gomes-Garcia, an incoming freshman at Pope John Paul II. “I enjoyed it because you got to let out your feelings.”

There was a wide array of programs on Saturday including morning worship, daily Mass, men’s and women’s conferences, entertainment workshops, a workshop for newly graduated seniors and time for small groups.

This was Gomes-Garcia’s first time attending a Steubenville conference and she used two words to describe the sessions: amazing and spectacular. “They were really inspiring,” she said.

Throughout the weekend the teens had many opportunities to receive the sacrament of reconciliation. Father Maloney estimates he heard around 150 confessions over just three days, which he described as “quite the uplifting experience.”

The Saturday evening procession was an especially prayerful part of the retreat. Everyone gathered in the fieldhouse with the lights turned out as the host was carried around the large room in a monstrance while throngs of worshipers prayed, moved by the Holy Spirit. There was quite a mix of emotions. People wept, some passed out, others smiled and some just prayed before the Blessed Sacrament.

“It was very touching and I felt God’s presence near me,” said Gomes-Garcia.

After one last session with worship music the next morning, the weekend concluded with a Sunday Liturgy and then it was time to leave for home.

“After the Saturday procession, there is a lightness at the concluding session and Mass,” said Raeanna Woodall. “Everyone is so happy and so filled with the Holy Spirit.”

On the way back, there was a traffic jam in Pittsburgh but that did not cause any impatience because there were plenty of opportunities to pass time as each person on the bus took the time to share what they observed.

“We all shared our experiences of the trip,” said Halle Woodall. “I loved hearing about what people thought.”

In addition to talking about what they observed, people passed the time on the way back singing some of the songs from the retreat. People also slept as some did not get a lot of rest during the two nights as they were wound up from all the activity.

Now that the teens are back home, they say they feel tremendously inspired by the trip and its experiences.

“This was my second year attending the conference,” said Raeanna Woodall. “Last year, I found a (desire) to form my faith as my own, not just something my family practiced. This year, my faith was already formed and I got the experience of strengthening it.”

This marked the second time that Halle Woodall attended a conference at the university and she wants to go back for a third.

“I will most definitely attend next year,” said Halle Woodall. “I love Steubenville and I think it is an amazing experience. I absolutely recommend it to anyone who is considering going. It’s a great way to deepen your relationship with God.” 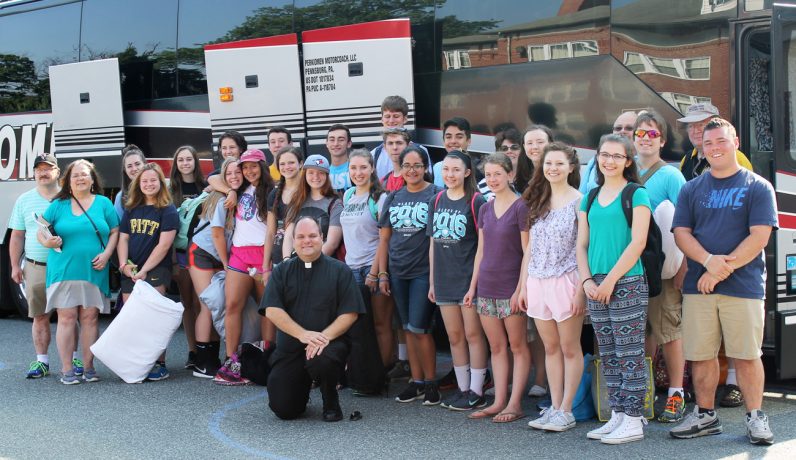