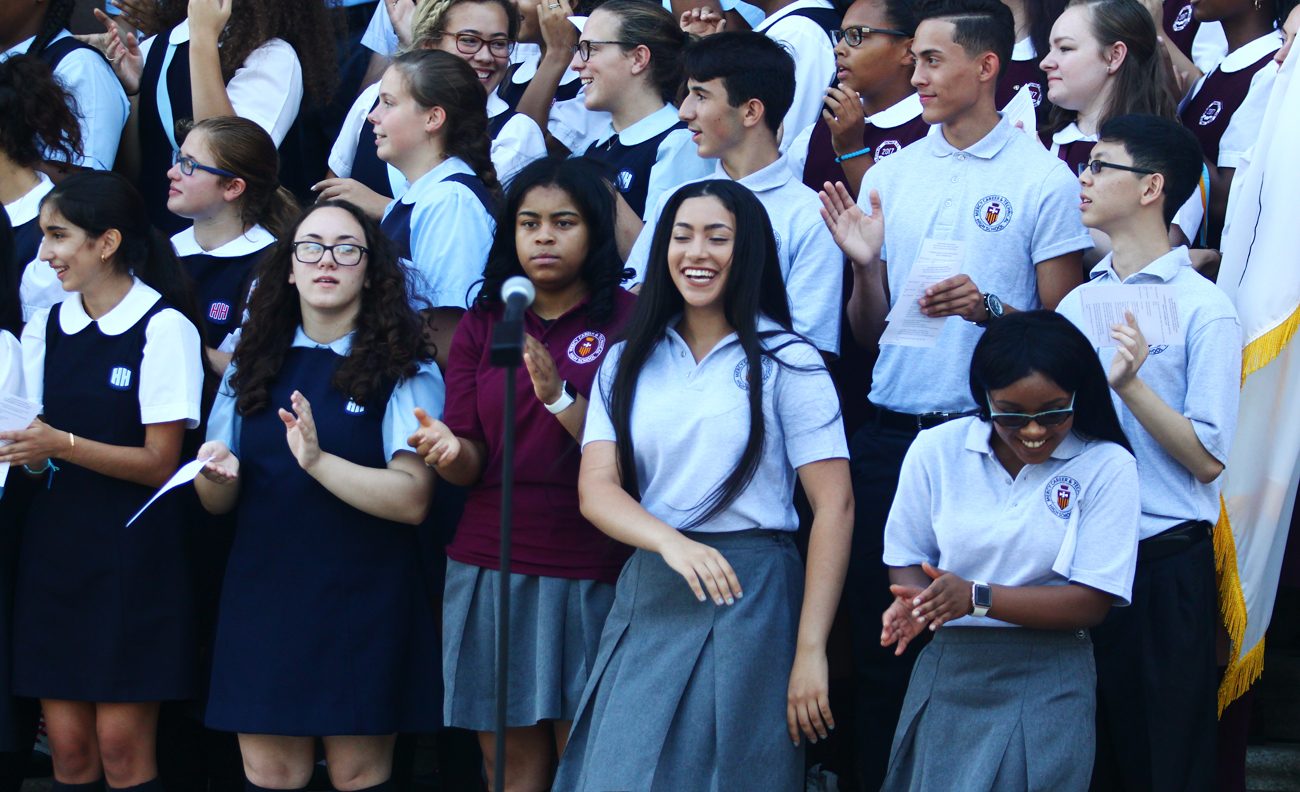 Students representing every high school, elementary school and and school of special education came out and cheered the start of the new academic year at a pep rally Sept. 9 outside the Cathedral Basilica of SS. Peter and Paul, Philadelphia. (Photo by Sarah Webb)

Some Catholic school students, teachers and administrators weren’t in school on Friday morning, Sept. 9, but instead they closed 18th Street in Philadelphia and cheered from the steps of the Cathedral Basilica of SS. Peter and Paul in a raucous pep rally to begin the new school year.

About 150 representatives of the 17 archdiocesan high schools, four schools of special education and 119 Catholic elementary schools gathered mid-morning to the sounds of the Bishop Shanahan High School Jazz Pep Band.

The students bopped along to the music, and the moves of St. Hubert High School’s cheerleaders, as the colorful variety of school uniforms energized both sides of the street in front of the imposing basilica.

Bishop Michael Fitzgerald told the rally’s participants that they were kicking off the 233rd year of Catholic education in the Philadelphia region, whose efforts he oversees in the archdiocese.

Since Sept. 9 was also the feast day of St. Peter Claver, the 17th century missionary to African slaves in the New World, Bishop Fitzgerald noted the saint was “devoted to racial harmony in our communities” and he prayed that “the Lord will give us peace in this academic year.” 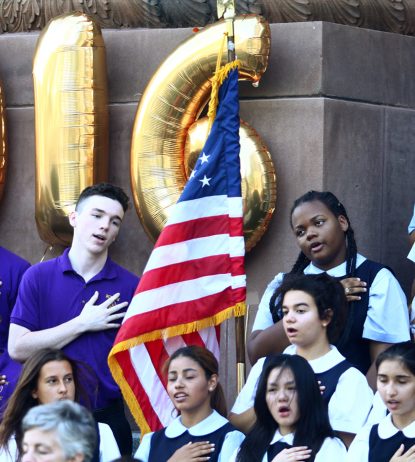 The pep rally begins with the Pledge of Allegiance.

In his prayer for the rally Bishop Fitzgerald said, “We depend on the guidance of the Holy Spirit and the intercession of the Blessed Virgin Mary and St. John Neumann, our patron of Catholic schools.”

He also thanked many organizations for their support of Catholic education, including Faith in the Future Foundation, the Maguire Foundation, BLOCS, the Association of Catholic Teachers and Independence Mission Schools.

The bishop’s colleague in the archdiocesan Office for Catholic Education, Secretary Christopher Mominey, said students should thank Catholic school supporters including especially their parents, “because Catholic education is no longer free. It takes the investment of parents, supporters and pastors.

“Also thank your teachers and administrators,” Mominey said. “Have a good year and know we are praying for you.”

After their speeches, the students were treated to more music from the 75-member Shanahan band, a selection of patriotic songs by the St. Francis Xavier School Choir and a song by the special education students at Our Lady of Confidence Day School.

From the Cathedral’s steps, students cheered on their favorites in a foot race of seven high school mascots down 18th Street – the ones in bulky costumes on an already-hot day racing at a disadvantage. The Roman Catholic High School Cahillite, with mock sword raised high, came in first to the roar of his schoolmates on the steps.

That was the favorite part of the pep rally for Morgan Kane, an eighth grader at St. Mary Interparochial School in Old City Philadelphia. Her parents who work in center city have brought her to St. Mary’s for years even though her family lives in the western suburbs.

Kane said it is important to her parents and for her “to get a good education and a successful foundation for a successful career.”

Her Catholic school education, which she hopes will continue next year either at Merion Mercy Academy or Archbishop Carroll High School, is not all about a future career. Kane also enjoys her faith formation classes in school. “I love religion,” she said.

Jordan Jaramillo, a Bishop Shanahan junior and drummer in the band, has high hopes for the new academic year.

The pep rally was the first of its kind for students and administrators, including one new employee in the Office of Catholic Education who launches a new and important role for the archdiocese.

Nancy Sanchez was hired over the summer as the field coordinator for Hispanic outreach, with responsibility for increasing enrollment by “reaching out to Hispanic families, to bring more of our brothers and sisters to our schools, to make building bridges possible for Latino children,” she said.

Those young people face barriers of language and culture in predominantly English-speaking communities so Sanchez wants to invite bilingual volunteers to be “madrinas,” or godmothers, to help bridge those divides.

She hopes to help Hispanic children and families understand the English-speaking culture of which they are becoming a rapidly growing segment.

Sanchez also wants to help Anglo parishioners “value all that Hispanic children offer” to their school and parish communities, she said. 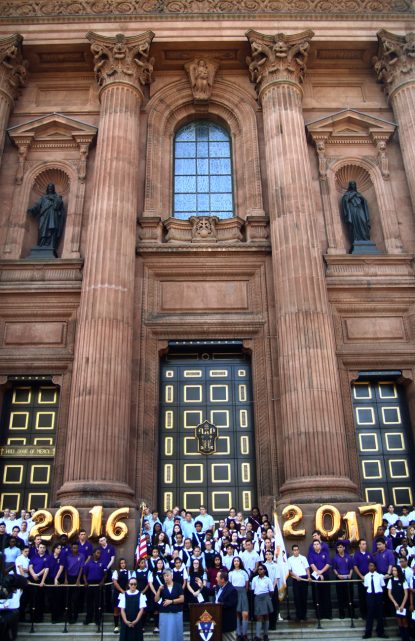 Chris Mominey (center), secretary for Catholic education, addresses the young men and women at the pep rally kicking off the beginning of the 2016-2017 school year.

Parents of all backgrounds face a broader array of choices for their children’s Catholic elementary education than they did not many years ago, when parish schools based in neighborhoods were all but exclusively the norm.

St. Mary’s Interparochial School was one of the earliest models of consolidating two or more parish schools into one regional school – more than 40 years ago — and it has become a growing trend in the archdiocese over recent years.

If the students representing their schools at the pep rally were any indication, the products of Catholic education still impress, no matter the school model.

St. Mary’s eighth grader Ava Cima begins her final year at the school warmly reflecting on her time there, and brightly to her future.

“I have gained so many experiences” at the school, she said, including opportunities to learn hands-on engineering by building a 10-foot-long wooden boat that now is on display at the Independence Seaport Museum in Philadelphia.

Assessing her goals for a future career, she said, “I love science, so maybe an astronomer.”

But she is not limiting herself in any way. “Maybe even president — I have big dreams,” Cima said.

NEXT: Funds sought this weekend for victims of Louisiana flooding