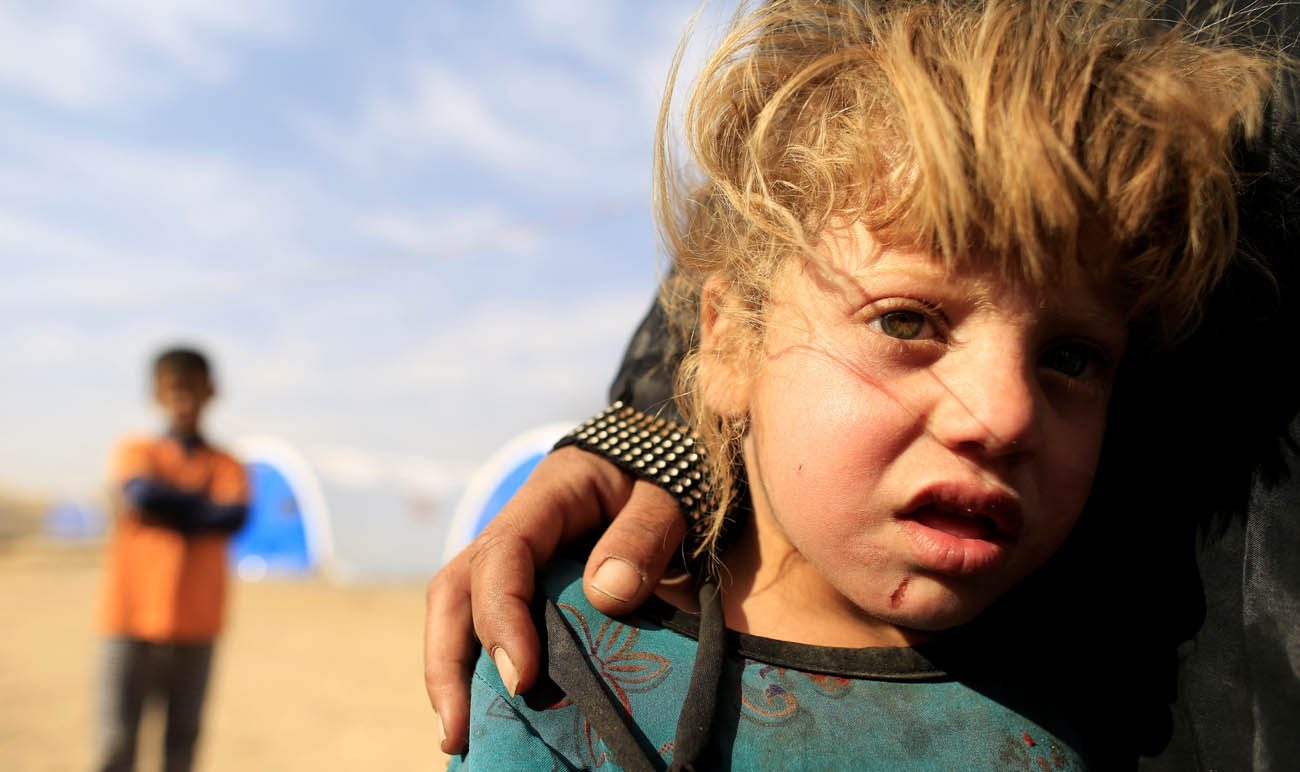 A Iraqi girl who fled Mudarraj village, which is still under Islamic State's control, stands with her family Oct. 21 at a camp near Mosul, Iraq., Pope Francis said God became man in order to weep for his lost children who, through the idolatry of money, have left countless innocents dead because of war and arms trafficking. (CNS photo/Zohra Bensemra, Reuters)

VATICAN CITY (CNS) — God became man in order to weep for his lost children who, through the idolatry of money, have left countless innocents dead because of war and arms trafficking, Pope Francis said.

Like the father of the prodigal son, who would watch waiting and hoping for his son’s return, Jesus reflects “the tenderness of God” who looks at his people and weeps, the pope said Oct. 27 during his morning Mass at Domus Sanctae Marthae.

“A father who does this is a father who lives in mourning, waiting for his son to return. This is the cry of God the father,” he said.

Pope Francis focused his homily on the day’s Gospel reading from St. Luke (13: 31-35) in which Jesus dismisses warnings that his life is in danger and looks toward Jerusalem, saddened by the disbelief of its inhabitants.

“Jerusalem, Jerusalem, you who kill the prophets and stone those sent to you, how many times I yearned to gather your children together as a hen gathers her brood under her wings, but you were unwilling!” Jesus said.

Recalling that “somebody said, ‘God became man in order to weep for what his children have done,'” the pope said that Jesus’ words in the Gospel reflect the sadness of God, who “continues to weep” for a world that is mired in violence, injustice and war.

“Even today in the face of calamities, in the face of war waged to worship the god of money, so many innocents killed by bombs thrown by the worshippers of the idol of money; even today the Father weeps, even today he says, ‘Jerusalem, Jerusalem, my children, what are you doing?’ And he says this to the poor victims and to the arms traffickers and all those who sell the life of the people.” he said.

Pope Francis encouraged Christians to reflect on God “who became man in order to weep” and on the idea that he continues to weep today.

“He weeps for this humanity that doesn’t understand the peace he offers, the peace of love,” the pope said.

NEXT: Readings of the holy Mass – Thirty-first Sunday in Ordinary Time