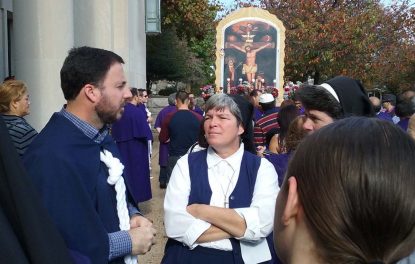 Over 300 of the faithful gathered to do some heavy lifting on Sunday, Oct. 30 at St. William Parish in Northeast Philadelphia’s Lawncrest section.

Taking turns in groups of 20, men and women carried a large, 400-pound platform through the surrounding streets. Atop the platform, surrounded by flowers, was a painting of El Señor de los Milagros (“The Lord of the Miracles”) – an image of the crucified Christ designed by an unknown artist in 17th century Peru.

Since 1998, the procession has been an annual tradition at St. William, a diverse parish with a number of vibrant ethnic communities.

“When we started, there were about 10 Peruvian families in the parish,” said Rodolfo Toro, the current coordinator of the devotion. “Little by little, it has grown, and now several hundred people participate.”

Months of hard work and sacrifice precede the celebration. To cover the costs of the event, Toro and his group hold several fundraisers. “We have dinners, parties – things that help us raise the money while bringing us together.”

That fellowship culminates in a nine-day novena held at the end of October. “We meet in each other’s homes to pray the novena and share meals,” Toro said. “On the last day, we have Mass, followed by the procession and then dinner in the parish hall.”

In fact, devotion to El Señor de los Milagros has its origins in community life. Around the year 1650, Angolan slaves living in Lima, Peru formed a prayer group. In 1651, one member painted an image of Christ crucified on a wall of the storeroom in which the group met.

The image inexplicably survived two devastating earthquakes in 1655 and 1687, as well as a misguided attempt by authorities to destroy it in 1671. In gratitude for the image’s preservation, prayer groups began to process through the streets of Lima with a replica of the painting.

Today the original image is housed in the sanctuary of Lima’s Las Nazarenas Church, and the annual processions through Peru’s capital draw up to 3 million participants.

Although smaller in scale, St. William’s celebration brings the same faith from Lima to Lawncrest.

“I taught for several years in Peru, and I told the children that no matter where there were Peruvians in this world, there would always be a procession to El Señor de los Milagros,” said Sister Rose Patrice Kuhn, I.H.M., director of St. William’s Hispanic Ministry. “And here we are in Philadelphia, doing just that.”

Vitaliano Gallardo, Consul General of Peru, agrees. “For the consulate of Peru, it’s really important to follow our community in their faith path here,” he said after the Mass. “Especially in Philadelphia, which is a city with extraordinary significance for the United States.”

St. William’s Peruvian community gladly shares this devotion with the parish as a whole. A painting of El Señor de los Milagros permanently hangs in the lower church’s sanctuary, where it is venerated throughout the year by parishioners of all ethnic backgrounds.

Earlier in the week, students in the parish’s religious education program held an informal procession in honor of El Señor de los Milagros.

“We want to unite all the different cultures in the parish,” said Sister M. Bernadette Taraschi, I.H.M., director of religious education. “It’s important to expose the children to devotions from all of our parish’s ethnic groups.”

Noting the traditional purple robes worn by devotees, Father Alfonso J. Concha, pastor of St. William, observed that El Señor de los Milagros is a universal image that speaks to everyone. “Even if you’re not wearing purple today, you’re wearing it in your heart,” he said.

Angel Gallegos, who built the procession platform, points out that El Señor de los Milagros is meant to encourage individuals living in community with one another, regardless of nationality.

“After the image survived the earthquakes, it was processed in the streets because people wanted more — more of the Lord,” Gallegos said. “When you come to the image in faith, you bring your family, your problems, your sickness. The image reminds us that our Lord is all powerful, all loving, and we come to believe more strongly.” 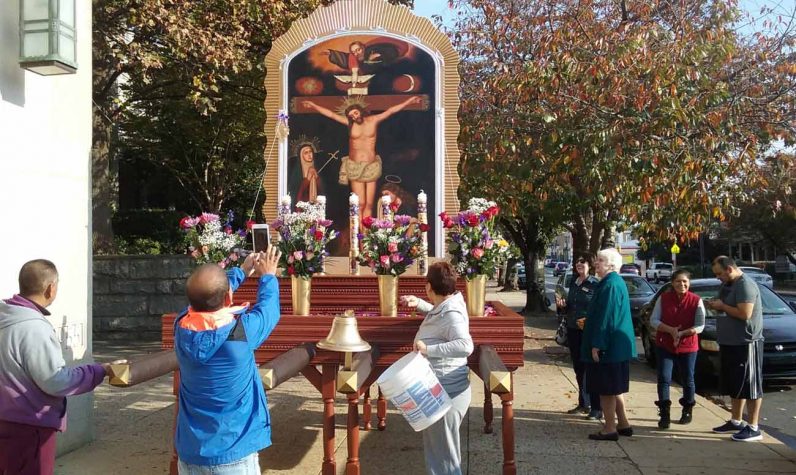 Parishioners decorate the platform with flowers prior to the procession outside St. William Church, which gave people attending earlier Masses at the church a chance to see the image and meet some of the devotees. (Gina Christian)