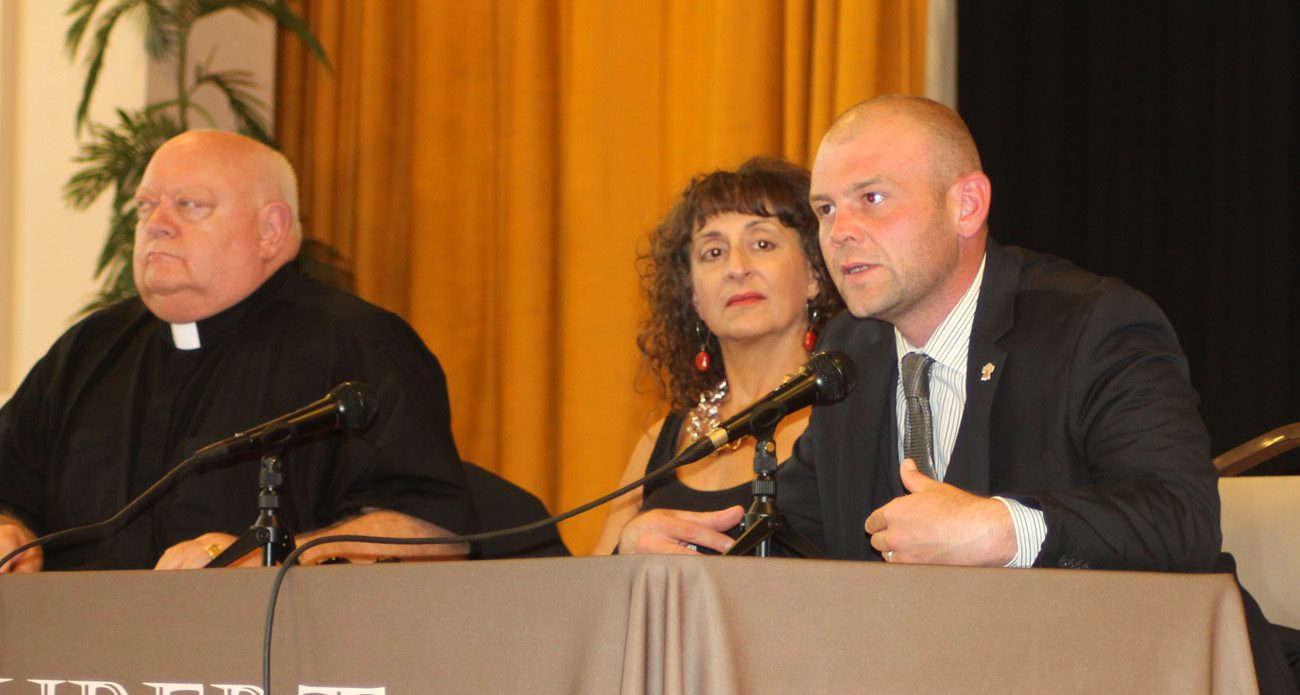 Ken Gavin (right), director of communications for the Philadelphia Archdiocese, speaks at a Sept. 28 panel discussion at St. Hubert High School reflecting on the one-year anniversary of the World Meeting of Families and visit of Pope Francis to Philadelphia in September 2015. Also on the panel were Vincentian Father Carl Pieber and professor Ada Tremonte. (Photo by Lou Baldwin)

It doesn’t seem possible a year has passed since the World Meeting of Families ending with the visit of Pope Francis to the City of Brotherly Love on Sept. 26-27, 2015.

What do you remember about it? Did it affect your life?

These were some of the topics of a panel discussion last Tuesday evening, Sept. 27, at St. Hubert Catholic High School for Girls in Northeast Philadelphia.

The event was sponsored by St. Hubert and Catholic Voices U.S.A. It was moderated by Kathryn Jean Lopez, an editor with the National Review and founder of the American branch of Catholic Voices, an organization that trains lay men and women to present the case for Catholic issues in the public square.

Panelists were Ken Gavin, director of communications for the Archdiocese of Philadelphia; Ada Tremonte, associate professor at the Westfall College of Arts and Design at Drexel University and Vincentian Father Carl Pieber, executive director of the Central Association of the Miraculous Medal in Germantown.

Father Pieber also conducted a Holy Hour before the discussion. Representing St. Hubert as host was Lizanne Pando, the school president who managed communications for the World Meeting of Families.

Lopez asked the panelists what left the greatest impression upon them. Gavin remembers at the World Meeting component, “seeing 20,000 people flooding the Convention Center and the spirit of joy of everybody there to experience the family and experience Christ through the family. Then at the papal Mass seeing the sea of humanity quiet and focused on the Holy Father.”

Tremonte, who was part of the team trained by Catholic Voices to assist by answering questions posed the multitude of members of the press, recalls, “I met people from all over the world, from all walks of life, and everyone was friendly and congenial to one another.”

Father Pieber attended the papal Mass in the Cathedral Basilica of SS. Peter and Paul but not the main public Mass on the Benjamin Franklin Parkway because he was tied up welcoming the 10,000 pilgrims who visited the Miraculous Medal Shrine over the week. “It was wonderful, we put rosaries in their hands,” he said, “young people, old people in wheel chairs.”

As to the lasting effect, “The Holy Father’s visit was a gift we received here and the impact can be far-reaching,” Gavin said. “It was a gift from God and we can take from that permanently.”

There is a lot of potential, he suggested, “but it is only something that will unfold over the years.”

Tremonte recalls how at Drexel University there were many people complaining about the disruptions caused by the papal visit but when the day came they were scrambling to get tickets.

“For me,” she said, “it was important that my children saw my husband and I were part of this. The family is important, creating family and having it go forward is important.”

“I don’t know how long it is going to last, but we had visitors from all over,” Father Pieber said.

What impressed Gavin was the tone of the World Meeting. “It wasn’t academics debating with weighty words, it was accessible in lay terms; the Congress was in a language the people could understand.”

Tremonte found it comforting “for people to know there are other people who have the same problems they do, and we are not alone. Everyone took that back to their own country to be an example for others. Even those who were not Catholic were impressed by Good Pope Francis.”

Father Pieber was in agreement. “I think it was very positive for Catholicism and for the pope,” he said. “I think he changed his image with many people. I think the church’s image was changed for people outside the church and inside the church. It is an image of service for the poor and that is good.”

On a more personal note, in the aftermath of the World Meeting, Father Pieber has been asked to present a periodic radio show on Relevant Radio (640 AM locally) which will help him spread devotion to Our Lady.

Lizanne Pando was satisfied not only with the World Meeting of Families and this particular commemoration but suggested, “It is important to mark the anniversary of the Holy Father’s visit with prayer and discussion. It resonated well with everyone who was here. It is a historic event and we should continue to look at it.”

NEXT: Four Catholic schools in archdiocese named tops in U.S.