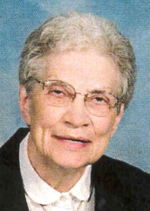 Born in Philadelphia on June 26, 1925, she was the daughter of William A. Kleschick and Frances Wunsch Kleschick. She attended Holy Child Grade School and St. Mary’s Academy in Philadelphia. In September 1943, she entered the Sisters of St. Joseph and professed final vows on Aug. 8, 1951.

She earned an A.B. from Chestnut Hill College and an M.A. from University of Notre Dame in English literature.

She also taught in schools in the Allentown and Trenton dioceses, and the Archdiocese of Newark.

Sister Marie was a convent helper at the Cathedral of SS. Peter and Paul in Philadelphia for several years. In September 2007 she was missioned as a St. Joseph Villa resident where she died.

The funeral Mass was celebrated Sept. 8 at St. Joseph Villa.

She is also survived by nieces, nephews, grand nieces, grand nephews and members of her community, the Sisters of St. Joseph.