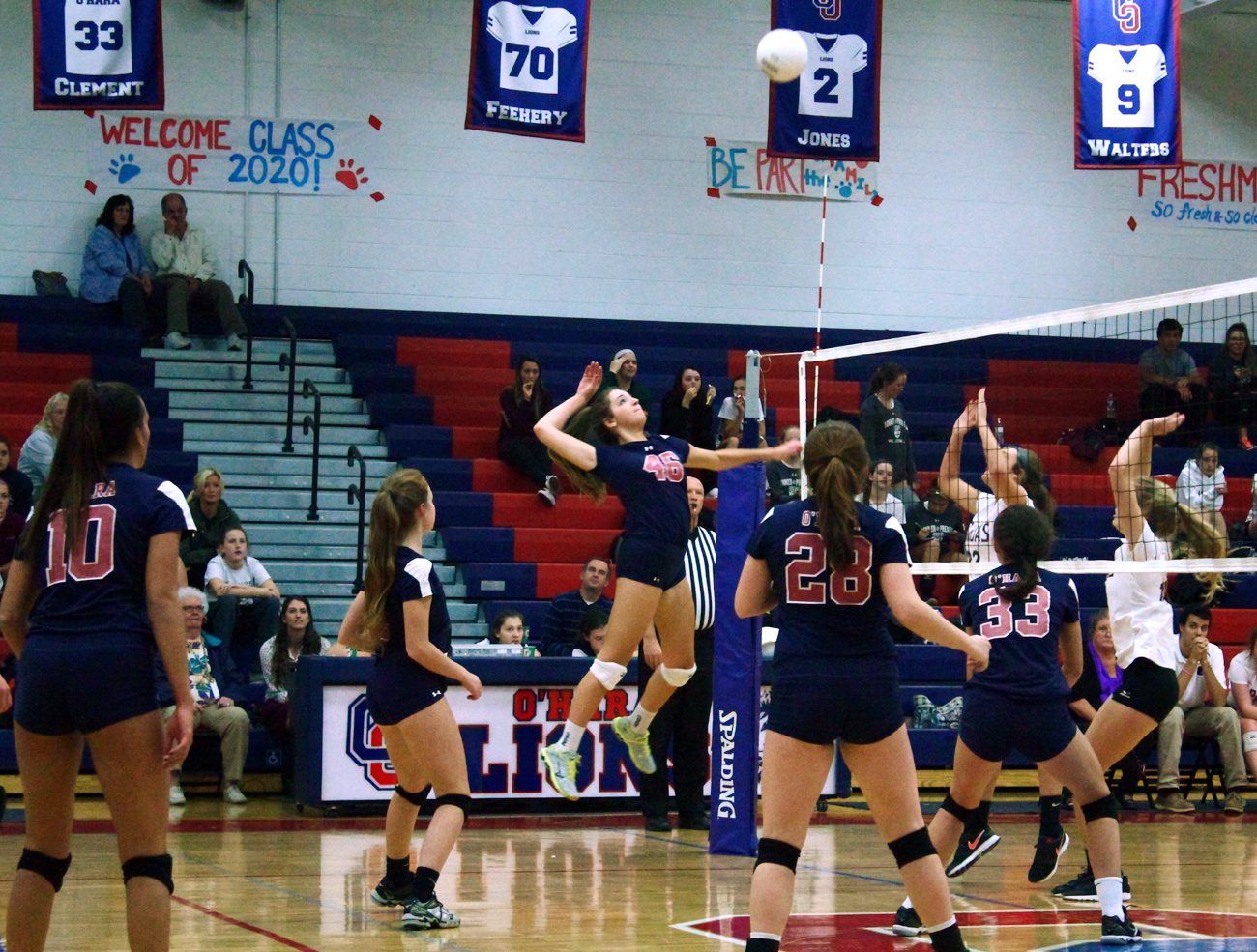 A Cardinal O'Hara player returns the ball during the Lions' game against Bonner-Prendergast Oct. 11. (Sarah Webb)

Senior Charlee Borcky had no idea what she was in for as she and her Cardinal O’Hara volleyball teammates warmed up to host Philadelphia Catholic League and Delaware County rival Msgr. Bonner-Archbishop Prendergast on Tuesday, Oct. 11.

(See a photo gallery from the match here.)

The senior had tied her school record of 148 career aces in a victory over West Catholic on Sept. 29. Then on Tuesday, Oct. 4, she officially broke that record in a win over St. Hubert and was honored on the court prior to taking on Bonner-Prendie.

“I had no idea I was even close to the record,” said Borcky. “I had no clue. I was crying. I was just so surprised.”

Following her big surprise, Borcky continued her good work. She finished with 13 kills, five digs and two aces, extending her total career aces to 160 as the Lions dominated the Pandas, 3-0. They emerged with scores of 25-16, 25-10 and 25-12.

This outcome put the Lions in second place in the Catholic League with an overall record of 15-2.

Another special moment in a special evening was the Vest-A-Cop charity event at O’Hara that raised $1,230 to purchase bulletproof vests for police officers that protect and serve local communities. In attendance were Collingdale Police Chief Bob Adams and Ridley Park Corporal Marc Hanly who was shot in the chest and leg in the line of duty on Aug. 30, 2015. On that day the bulletproof vest saved his life, according to police.

“This is a perfect thing to do to raise money,” said Collins. “Anything we can do to help is great.”

The game began with Prendie taking the first lead. O’Hara used its first time out when it held an 8-7 advantage and that came in handy as the Lions remained on top for a while.

While O’Hara was in the lead by a substantial margin for most of the second game, Prendie made it narrow in game 3. O’Hara was trailing by one point early in the set and took a time out.

That was just what the Lions needed as they came roaring back into the game. They extended their surplus to 15-7, prompting Prendie to call a time out. The pause did not stop O’Hara which managed to get the shutout.

“We got a little tired,” said Borcky. “We thought we’d win easily. We had to do more in the last set.”

“We’ve been working hard in practice,” said Daly. “We just trust each other on and off the court.”

“I feel really good,” said Daly of her team’s prospects for the playoffs. “I have a lot of faith in our team. We can keep it up.”

PREVIOUS: Parity in Catholic League soccer means one of 8 teams could be champs