Advent preparation: Are we ready to receive Jesus? 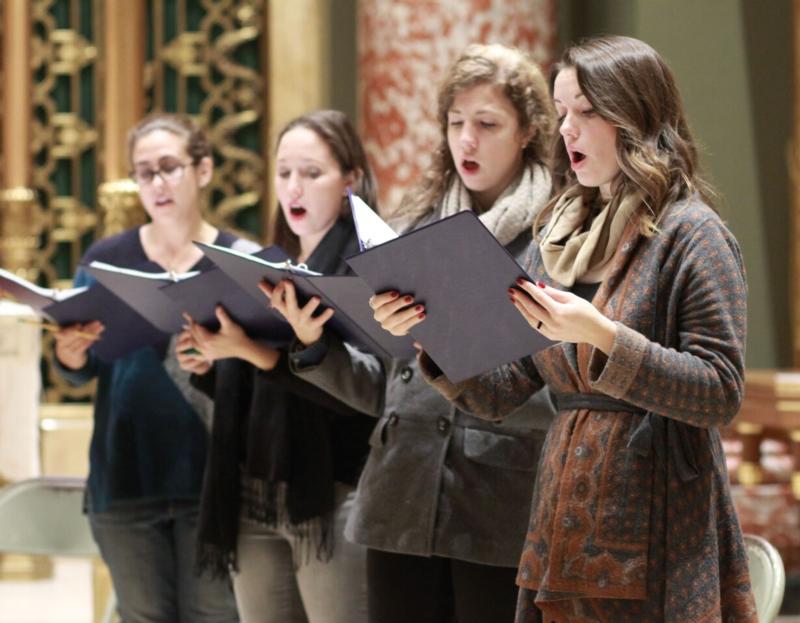 Amanda Sidebottom, Elizabeth Merrill, Grace Bernardo and Clare Maloney, members of the Choir of the Church of Our Saviour in New York City, record music at the church in October, 2015, for "Hark! A Thrilling Voice Is Sounding," a CD of sacred Advent and Christmas music released last year. Advent is a time for serious reflection on our lives as disciples of Jesus, whose return we are called not simply to expect but to prepare for -- with great care as well as great joy. (CNS photo/Harold Levine, courtesy Church of Our Saviour)

Advent is a time for serious reflection on our lives as disciples of Jesus, whose return we are called not simply to expect but to prepare for — with great care as well as great joy.

And the Scriptures for this year’s second Sunday of Advent give us a wonderful, and wonder-filled, look at life for the Christian believer upon the second coming.

Isaiah is particularly vivid in his portrayal of the kingdom — the baby playing alongside the cobra, the calf and the young lion browsing together — but he prefaces that by noting the qualities of the one “from the stump of Jesse” who will come to make this all happen.

These qualities are reflected, nearly 2,000 years later, in St. Bonaventure’s “Prayer for the Seven Gifts of the Holy Spirit.” Bonaventure, an Italian cardinal of the 13th century and a doctor of the church, composed the prayer as a series of petitions, asking for understanding, counsel, courage, knowledge, piety, fear and wisdom.

“Lord Jesus,” Bonaventure prayed, “as God’s Spirit came down and rested upon you, may the same Spirit rest upon us.”

Bonaventure also was a Franciscan, the order whose founder, St. Francis of Assisi, is regularly portrayed amid idyllic pastoral settings surrounded by gentle wildlife, more or less in keeping with the image presented by Isaiah.

This, our Advent readings suggest, is also the hope and promise of the second coming. Pope Francis (another devotee of the saint from Assisi) made that very point on the first Sunday of Advent in 2013 — the first year of his pontificate, with readings identical to this year’s — as he addressed an Angelus gathering at the Vatican.

“For the great human family,” he said, “it is always necessary to rediscover the common horizon toward which we are journeying. The horizon of hope! This is the horizon that makes a good journey.”

But as we prepare during Advent to receive the risen Christ — and journey toward that “common horizon” of hope — the Holy Father, in Diane Houdek’s “The Joy of Advent: Daily Reflections from Pope Francis,” offers us something along the same lines, but a bit more weighty, to consider.

Jesus, the pope says, is the “guide and goal of our pilgrimage” toward the kingdom of justice and peace — a pilgrimage of “the entire people of God.” Here Pope Francis recalls the words of Isaiah (2:4):

“He shall judge between the nations, and set terms for many peoples. They shall beat their swords into plowshares and their spears into pruning hooks; one nation shall not raise the sword against another, nor shall they train for war again.”

Swords and spears are objects that many of us have never used, and want no part of, even though our world, like that in Isaiah’s time, is beset by war and violence that attack our peace and tranquility, even our homes and neighborhoods. Given the nature and scope of such violence, we can easily doubt our ability to counter it.

But weapons need not be made of steel to do damage. In “The Joy of Advent,” we are called to think about the ways in which we use words as weapons every day to hurt others. Pope Francis invites us to transform our words in such a way that they become expressions of “tolerance, compassion and love.”

The pope, Houdek writes, reminds us that we bring the most important word of all, the Word of God, to life each day “in the way we reach out to others” with God’s love and mercy.

Preparing and waiting for the Lord, then, is not simply about sitting around and putting our own houses in order. We are called to help the world prepare to receive the risen Jesus by how we act toward and treat one another in our daily lives — including our choice of words, and the tone and context in which we use them.

And it is easy at this time of year, with its unceasing demands on our time, finances and patience, to become annoyed, agitated, frustrated and angry to the point where we react and speak in ways that we know are inappropriate and even hurtful to others.

Perhaps, as part of our Advent preparation and practice, we can pray to the Lord that the gifts of the Holy Spirit — understanding, wisdom, counsel and the rest — may fall upon us, just as St. Bonaventure prayed nearly 750 years ago.

For by welcoming and receiving our Savior into our hearts — and not letting our words become weapons — we prepare to receive the peace and joy that is promised to those who believe in the risen Lord and await his return.

PREVIOUS: How to craft a Jesse tree with your family

NEXT: Advent: A moment ‘pregnant with Christ’