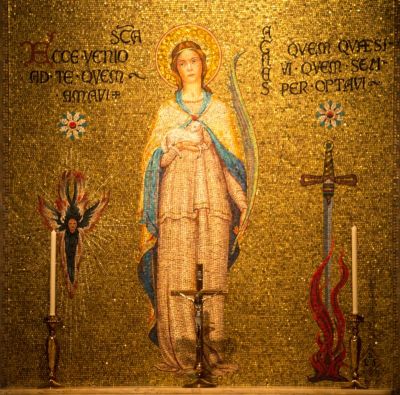 A mosaic of Agnes, a martyr and one of the Mothers of the Church, adorns a chapel wall in the Basilica of the National Shrine of the Immaculate Conception in Washington, in this Sept. 28 photo. Women in the early church did not generally leave behind doctrinal writings. But their lives had such a powerful impact that their stories were written, recited and sung from their day down to ours. (CNS photo/Chaz Muth)

In recent years, some have charged that the role of women in the early church was glossed over or, even worse, deliberately suppressed. The best-selling novel “The Da Vinci Code” is a case in point.

But anything beyond a superficial reading of the New Testament shows this allegation to be groundless. True, none of the Twelve Apostles selected by Jesus were women. But the four Gospels don’t hide the fact that most of them fled when Jesus was arrested.

Who was left to stand bravely at the foot of the cross? Three women.

One was Jesus’s mother, honored ever since as the greatest of all creatures. Another, Mary Magdalene, was dubbed “apostle to the apostles” since she, the first to see the risen Christ, was sent by the Lord to bring the good news to the Twelve.

But how about the next few centuries after the first generation, the period when the New Testament took shape and the creed was hammered out? This was the era of the early Church Fathers. But, one may ask, were there also early Church Mothers?

The men called “Church Fathers” were teachers who guarded the faith taught by the apostles. Their teaching, put down in writing, survived to guide the church through the ages.

Women in the early church did not generally leave behind doctrinal writings. But their lives had such a powerful impact that their stories were written, recited and sung from their day down to ours.

One of the most powerful evangelistic forces in the first few centuries was the extraordinary care given by Christians to the poor and the sick.

Two great epidemics ravaged the Roman empire in the 2nd and 3rd century. Infected pagans were often abandoned by family afraid of infection. Christians, on the other hand, risked their lives to nurse the sick and bury the dead.

The emperor Julian the Apostate appealed to pagan priests to emulate Christian charity lest even more Romans abandon the traditional gods for “the Galilean.” As one would expect, Christian women were the mainstay of what the emperor ridiculed as “this army of nurses.” Many of these nurses were infected with the plague and thus quietly laid down their lives for friends and strangers alike.

Other Christian women laid down their lives publicly in the arena. Perpetua and her slave, Felicity, were both nursing babies when they were given the choice to sacrifice to the gods or sacrifice their lives. They died together rather than surrender their faith. Their story, and the story of Agnes, the child martyr of Rome, became the most famous tales of martyrdom in the early church.

Literature extolling feminine heroism was something utterly new in Western literature; up until this point, epic stories featured men who conquered by killing. In these stories of martyrdom, women won a crown by dying. The example of such courageous love of those considered the “weaker sex” had a considerable impact on the pagan masses.

Behind every great man stands a great woman, so the saying goes. So it is that some of the greatest Fathers of the Church owed their vocation to women. St. Augustine’s dad was either a pagan or a nominal Christian. In any case, he died in Augustine’s teen years and had little impact on the boy’s life.

The devout Monica, on the other hand, persevered in prayer throughout her son’s rebellious years and introduced Augustine to Bishop Ambrose, who ultimately baptized him. Augustine later wrote over four million words on just about every conceivable topic. We’d have none of them had it not been for Monica.

A generation before Augustine, a young woman was born to a Christian family in what is now eastern Turkey. Macrina, the eldest of ten, dedicated her life to the education of her siblings. The eldest boy, Basil, returned from higher studies in Athens very impressed with himself. Macrina, not so impressed, challenged her brother to seek true greatness in Christ.

Prompted by the example and words of Macrina, Basil forsook the vanities of the world to live the life of a monk. Later made bishop, Basil wrote a book whose words made their way into the creed. When we each Sunday profess faith in the Holy Spirit, the Lord and Giver of Life, we are quoting Macrina’s little brother, Basil the Great.

Another of Macrina’s brothers found religion quite boring. Once again the words and example of his older sister helped prompt a conversion that ultimately propelled this man, known as Gregory of Nyssa, to become one of the greatest Christian teachers of the fourth century.

Gregory came to comfort the dying Macrina but found himself instead pouring out his heart and troubles upon the pillar whom he’d relied on all of his life. She challenged him to forsake self-pity, rejoice in his trials and “play the man.”

(D’Ambrosio is co-founder of Crossroads Productions, an apostolate of Catholic renewal and evangelization.)

PREVIOUS: Early Mothers of the Church

NEXT: Prayers for the dead not meant to ‘change God’s mind’