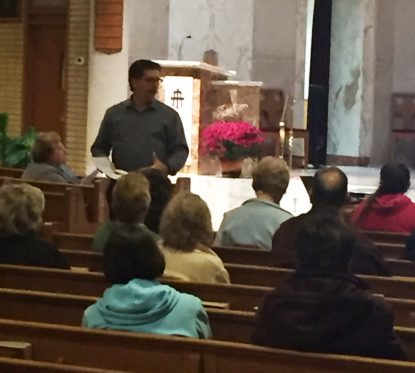 Dennis Mueller, a husband and father as well as director of religious education at St. Albert the Great Parish in Huntingdon Valley, talks with parishioners and guests at St. Pius X Church in Broomall.

In the 11 months since Pope Francis called for the extraordinary Jubilee Year of Mercy, Catholics have been invited to experience the gift of mercy that God extends to all people.

The reflection titled “The Prodigal Father, An Invitation to Conversion and Love” used Jesus’s parable often referred to as the Prodigal Son to remind attendees of God’s mercy and forgiveness.

Mueller explored the deeper meaning behind the parable through prayer, a Scripture reading, discussion and a video.

“We’ve been exploring mercy and we come to experience it,” Mueller said not only of his talk but also the sharing of participants at the event.

A husband and father of six children, Mueller is a member of St. Albert the Great Parish in Huntingdon Valley, where he works as the director of religious education.

Father William Kaufman, pastor of St. Pius X, saw the event as an appropriate event for his parishioners and guests as the Year of Mercy draws to a close in a couple weeks. Father Kaufman hopes those who attended will carry on what they learned after the year ends on Nov. 20.

“It’s a nice time to be together as we approach the end of this Year of Mercy,” said Father Kaufman.

Following an opening prayer, Mueller read from the Gospel according to Luke (Lk. 15:11-32) on the Prodigal Father whose younger son asked for his share of his father’s estate. The father granted this wish and so the son took the money his father gave him, went off to another country and spent the money.

As famine struck the country, the son realized he had sinned against heaven as well as his father and so he returned home and told his father he should be treated like his father’s servants. However, the father was so happy that the son had returned that he celebrated with a feast, for the son who was lost had been found.

The Prodigal Father, Mueller said, relates to two other parables, the Lost Sheep and the Lost Coin in the same chapter of Luke’s Gospel. Pharisees and scribes despised how Jesus spent time with sinners. He reminded them that if a man loses one of many sheep he will go after it until he finds it. Likewise, should a woman lose one of many coins, she will search her home until it is found.

Upon finding what they lost, they rejoice, and this is God’s way of telling us “there will be rejoicing among the angels of God over one sinner who repents” (Lk. 15:10).

“Jesus is challenging your perception of things, to see them as God sees them,” Mueller said. “We can never judge a person’s heart. God sees into the heart.”

These parables also help reveal the nature of God when it comes to our relationship with him in our daily lives, Mueller suggested.

“We are created to be in a relationship with God,” he said. “Everyone we know is destined to be a saint. You have to be holy to stand before God. There is nothing you can do to make God love you less.”

Mueller held a discussion after the reading in which people told what they had learned about how God is always ready to forgive and how there is always time to find what one has lost.

“I learned about the background and the setting of the Prodigal Father,” said Mary Flynn, a member of Our Lady of Perpetual Help Parish in Morton. “The father moved to the son to bring back his inheritance. He did it freely and willingly.”

Before the closing prayer, Mueller presented a music video by the rock band Lifehouse titled “Everything.” It tells of a world that is ever changing and that God, and him alone, is the one to whom people should turn. The song adds that while everything else can leave us feeling empty and abandoned, God is there for us at all times.

“We are free to reject God,” Mueller said. “He gave us our own free will. When we are lost, we lose our identity. We need to put ourselves in a position where we can be found. We’re all redeemable.” 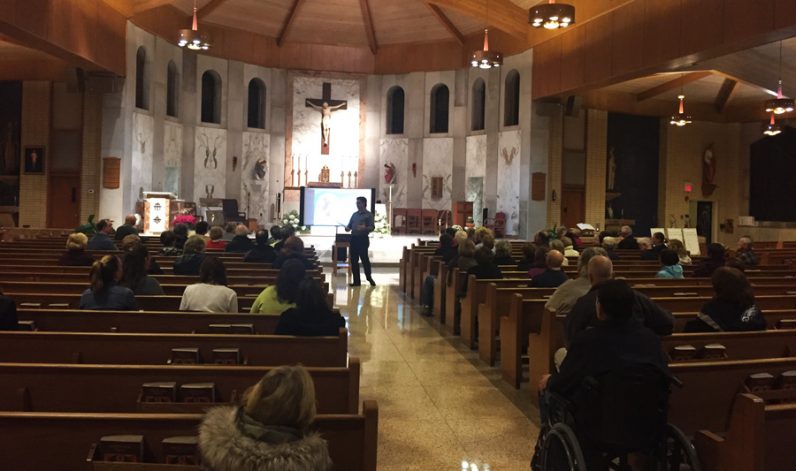 Participants at the Nov. 7 reflection at St. Pius X Church, Broomall, listen to Dennis Mueller’s talk titled “The Prodigal Father, An Invitation to Conversion and Love.”

NEXT: Thanks to foundation’s aid, Catholic schools are ‘saving lives’ in Phila.