How the Christmas story points beyond itself 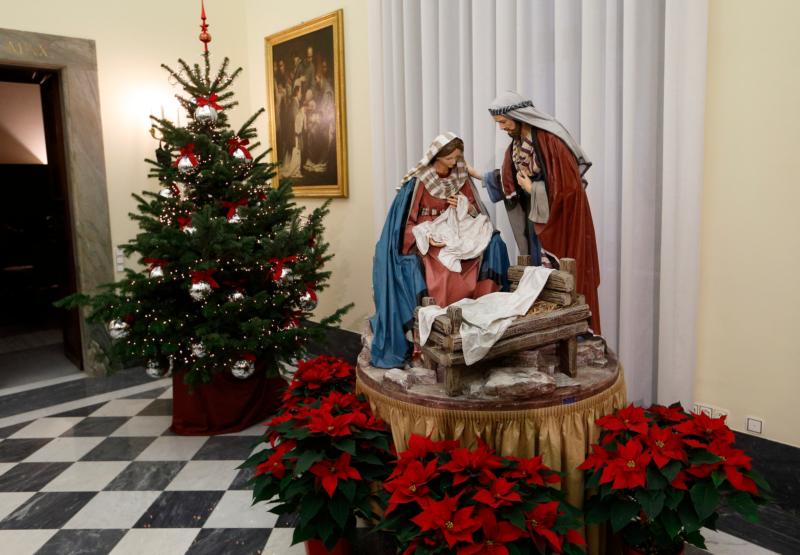 A Nativity scene and Christmas tree decorate the Apostolic Palace at the Vatican Dec. 15, 2014. The familiar scene of Jesus lying in a manger, tended by Mary and Joseph, points beyond itself to remind believers that this child is the Word of God, who "became flesh and made his dwelling among us" (Jn 1:14). (CNS photo/Paul Haring)

The Christmas story is vibrant and fast-moving, replete with vivid images of angels celebrating an infant’s birth and shepherds going “in haste” to find this newborn child, astonished to discover him “lying in the manger” (Lk 2:16).

Christians happily listen to this story every year. Can you imagine Christmas without it?

Some may think it resembles children’s stories in certain ways, and sure, it is a marvelous story for children. But there are compelling reasons for adults to hear it again and again too.

Without the story of the birth in Bethlehem of an infant named Jesus — without his birth as a real child needing a place to sleep peacefully, as all babies do — Christianity would be a very different kind of faith.

The familiar scene of Jesus lying in a manger, tended by Mary and Joseph, points beyond itself to remind believers that this child is the Word of God, who “became flesh and made his dwelling among us” (Jn 1:14).

So the story of Christmas proclaims the incarnation of God’s Son. It reveals, as the Second Vatican Council said, that the Son of God “born of the Virgin Mary” truly has been “made one of us, like us in all things except sin” (Pastoral Constitution on the Church in the Modern World, No. 22).

“The incarnation of the Word in a human family, in Nazareth, by its very newness changed the history of the world,” Pope Francis wrote in “The Joy of Love” (“Amoris Laetitia”), his 2016 apostolic exhortation on marriage and the family.

“We need to enter into the mystery of Jesus’ birth,” said the pope. We need, as well, “to contemplate the joy of the shepherds before the manger, the adoration of the Magi and the (Holy Family’s) flight into Egypt, in which Jesus shares his people’s experience of exile, persecution and humiliation.”

It also would be good, Pope Francis continued, “to peer into those 30 long years when Jesus earned his keep by the work of his hands, reciting the traditional prayers and expressions of his people’s faith and coming to know that ancestral faith until he made it bear fruit in the mystery of the kingdom.”

All of this, said the pope, “is the mystery of Christmas.”

Notably, it exudes “the beauty of family life,” filling families today with hope.

In fact, a point Pope Francis wanted to emphasize was that “Jesus’ own family, so full of grace and wisdom, did not appear unusual or different from others. That is why people found it hard to acknowledge Jesus’ wisdom.”

Living at St. Joseph’s side, Jesus apparently acquired valuable carpentry skills. “During his days in the trade,” Jesus the carpenter “doubtless would have been at home in any local ‘men’s shed,'” Australia’s Catholic bishops said in a fall 2016 statement.

The message of the incarnation was not always welcomed by all who considered themselves followers of Jesus. Some were convinced over the course of Christianity’s first few centuries that human flesh was unsuitable for God — that it would debase divinity for God’s Word to be made flesh.

Some doubted, therefore, that the Lord could be divine or one in being with God the Father. Early Christians debated such issues, and some battled over Christ’s identity.

There were those who found the Incarnation a bitter pill to swallow. They wondered how the divine Word of God could enter this world as fully as the birth of Jesus informs us he did.

For Christianity’s early centuries witnessed many who, viewing our physical, earthly world as a place deserving to be fled, did not believe that there is goodness in the world or in the human body — a goodness that Jesus’ birth as a child affirmed.

“The Son of God coming in our flesh and sharing the joys and sorrows, the successes and failures of our life … testifies to the astonishing love of God for all people and to the inestimable worth that he sees in them,” Pope Francis wrote in a 2013 letter to an Italian journalist named Eugenio Scalfari.

The utterly charming story of Christmas is treasured by Christians for much more than its charm. It stirs thoughts of the incarnation of the Son of God and stimulates a conversation about incarnate faith — the faith of believers today who find goodness in the world and in all human life, and set out to bring all that goodness into the light.

So, while the Christmas story is about Jesus, it really is about us too.

As Pope Francis wrote to Scalfari, “Christian faith hinges on the incarnation.” Because of the incarnation, moreover, “each one of us is called to make Christ’s gaze and love his own.”

Christian faith does not profess an “insurmountable separation between Jesus and everyone else,” said the pope. Instead, “in him we are all called to be children in the one Father,” and thus “brothers and sisters to one another.”

NEXT: Christmas celebrates anew the birth of Jesus Christ