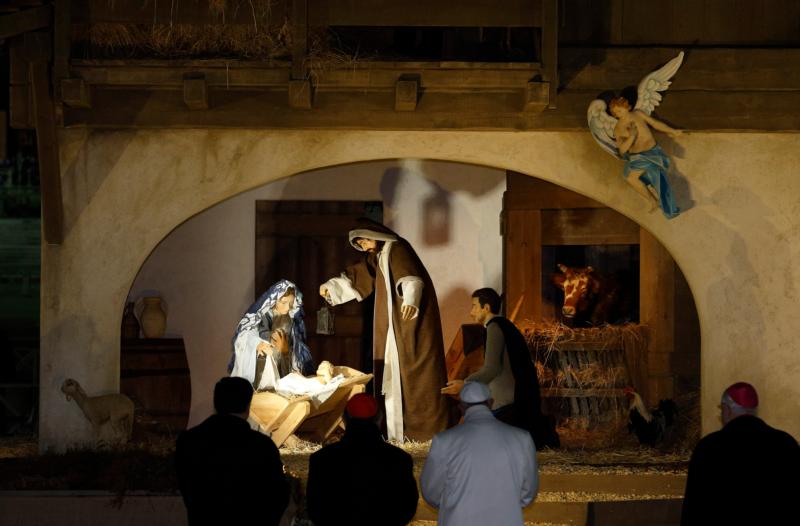 Pope Francis visits the Nativity scene in St. Peter's Square after vespers New Year's Eve 2015 in St. Peter's Basilica at the Vatican. No one should know better than Mary, mother of the Lord, that God acts in astonishing ways. (CNS photo/Paul Haring)

God is not reluctant to astonish people, it is said. That is a good thing, even when astonishing news briefly causes people to feel startled or confused — amazed by one of life’s unexpected developments.

No one should know better than Mary, mother of the Lord, that God acts in astonishing ways. Neither is it any wonder that the angel Gabriel, before announcing to Mary that she would bear “the Son of God,” urged her not to be afraid (Lk 1:26-38).

The angel’s presence signified God’s nearness, but Mary might nonetheless have experienced a tinge of anxiety upon learning of the astonishing way her life was about to change course.

And who was she anyway? Did she wonder: “Me? Really?” Anyone receiving astonishing good news might wonder momentarily if some mistake was made, if this news possibly was meant for someone else.

Mary did “not hide her surprise” at the angel’s astonishing news, Pope Francis commented in an October 2013 homily. Instead, she experienced “the astonishment of realizing that God, to become man, had chosen her, a simple maid of Nazareth.”

God had not chosen someone living “in a palace amid power and riches, or one who had done extraordinary things, but simply someone who was open to God and put her trust in him, even without understanding everything.”

God is like this, the pope made clear. “God surprises us.” Moreover, “it is precisely in poverty, in weakness and in humility that he reveals himself and grants us his love.”

The angel’s message to Mary “threw her simple life in Nazareth into turmoil,” the pope remarked. Astonishing developments in life have a way of doing that.

When news arrives that life is about to change in far-reaching ways — maybe that a family soon will move to a new home a thousand miles away — people immediately begin asking what steps to take next, which projects to set into motion first.

Many people tell of being astonished by life. Perhaps someone had a detailed plan for life but, rather unexpectedly and inexplicably, turned off course in ways that ultimately proved all to the good.

Some people encounter their own “angels” in the form of good people who deliver good news to them, whether through insightful, supportive words or the power of their example. This kind of “good news” can open people’s eyes and enable them to see that they could take a different direction in life.

Decades later a person could be forgiven for wondering how it all happened — how she wound up in a career that drew so greatly upon her finest talents, for example, or how he managed so brilliantly to marry just the right person.

Whatever such a person concludes, the message that God’s ways are nothing short of astonishing is unlikely to ring false. Wasn’t more than good luck at play?

God is a game changer. God’s astonishing ways can change everything, which is what happened for Mary.

I owe the term “game changer” to Minnesota Archbishop Bernard A. Hebda of St. Paul and Minneapolis. He used the term during his May 2016 installation as archbishop.

There could be a tendency to think God acted in a game-changing way in Mary’s life that revealed little about how God acts in others’ lives. But Pope Francis considers that conclusion off-track.

God rested his gaze on Mary, and God “rests his loving gaze on every man and every woman! By name and surname,” Pope Francis insists.

The mystery of Mary, the “girl from Nazareth,” is that she “is not estranged from us,” Pope Francis explains. “She is not there and we over here,” he says. “No, we are connected.”

She is like us, too, in that the astonishing news she received from the angel “didn’t make life easy for her,” the pope points out.

Of course, even when the astonishing news anyone receives is all to the good, it makes big demands and sets a new chain of events into motion.

Pope Francis thinks a question to ask about the astonishing, transforming ways of God is “whether we are afraid of what God might ask or of what he does ask.” In other words, “Do I let myself be surprised by God, as Mary was, or do I remain caught up in my own safety zone?”

In contemplating Mary, he wants believers to recognize their own destiny and “deepest vocation: to be loved, to be transformed by love.”

PREVIOUS: Mary pondered good news in her heart, not publicly

NEXT: Advent Week Four: Grow closer to Mary this Advent