Receiving the good news: Are we listening servants? 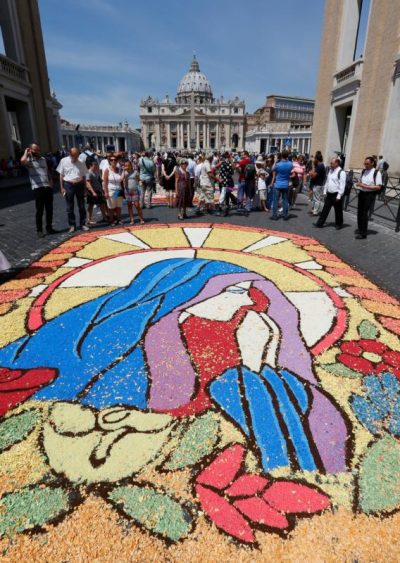 A floral rendition of Mary decorates the area outside St. Peter’s Square at the Vatican June 29. The words of the angel Gabriel, spoken to Mary in the Gospel of Luke (1:37), precede the most faith-filled response in all of Scripture: “May it be done to me according to your word.” (CNS photo/Paul Haring)

“For nothing will be impossible for God.”

The words of the angel Gabriel, spoken to Mary in the Gospel of Luke (1:37), precede the most faith-filled response in all of Scripture: “May it be done to me according to your word.”

It is a response echoed by Jesus himself, praying in the garden of Gethsemane, the night before he was crucified: “Not my will but yours be done” (Lk 22:42).

These responses — linking the birth and resurrection of Our Lord — model for us how we too are called to respond to God’s word.

Throughout Scripture, we encounter numerous individuals who are addressed by God — Noah and Moses often top the list — and asked to do things that, at first glance, little or no sense. (An ark? A march across the Red Sea? Seriously?)

Then there is Samuel, the young minister serving under Eli, who heard his name being called in the middle of the night and, three times, went to Eli, announcing, “Here I am. You called me.” Once Eli finally realized who was calling, he instructed Samuel how to reply, should this happen again: “Speak, Lord, for your servant is listening” (1 Sm 3:9).

Which is another way of saying, “Be it done unto me.” A message not everyone is ready to heed, no matter how good and faith-filled they may be.

Just before Gabriel tells Mary what is in store for her, he has another conversation with Zechariah, a priest and husband of Mary’s cousin Elizabeth. This couple, we are told, is “righteous in the eyes of God, observing all the commandments and ordinances of the Lord blamelessly.”

But when the angel tells Zechariah that, even though he and his wife are elderly and she has never been able to conceive, they will soon have a son — a son, adds Gabriel, who “will be great in the sight of the Lord” (Lk 1:15) — Zechariah is, understandably, stunned.

“How shall I know this?” he wonders, clearly not convinced.

That’s not the answer Gabriel is looking for, and so Zechariah is rendered mute for months, until Elizabeth gives birth. “Immediately,” we are told, “his mouth was opened, his tongue freed and he spoke blessing God” (Lk 1:64).

Mary, admittedly, was equally surprised when told she would conceive even though she was a virgin. Yet she willingly accepted what Gabriel told her. “I am the handmaid of the Lord,” she replied (Lk 1:38).

Such humility and obedience to the call of God is the model for us all, whether or not angels appear before us with proclamations of tidings and joy.

Indeed, knowing what God has done for us — specifically, the birth and resurrection of Jesus — should help us understand and accept more fully the promise of Advent: that the risen Lord is present in our lives today and will return in glory.

Like Samuel, we are called to listen, to serve and to believe. For, as Gabriel declared, “nothing is impossible with God.”

PREVIOUS: What is the cause for rejoicing? Liturgy reveals the answer

NEXT: Mary pondered good news in her heart, not publicly