Surprised by new life at Advent 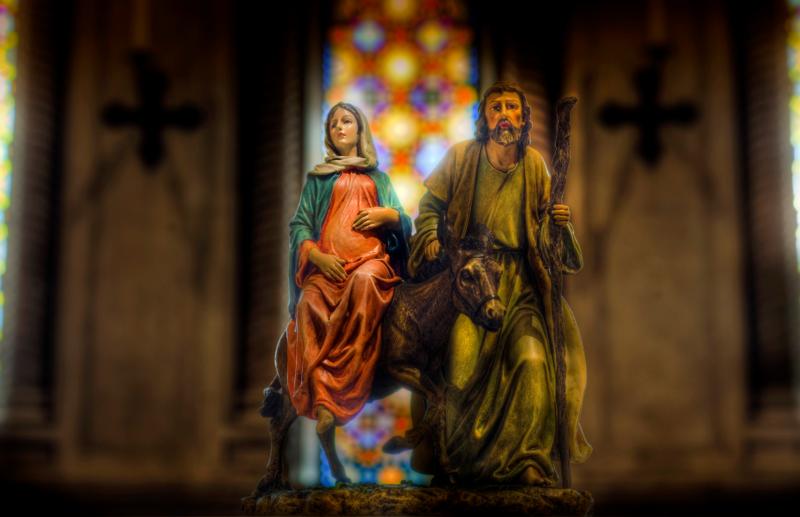 A sculpture showing an expectant Mary with Joseph en route to Bethlehem is seen in a church during the season of Advent, the time of anticipation and hope before Christmas. (CNS photo/Lisa A. Johnston)

Almost 30 years ago, I volunteered at a pregnancy support program. Our office was in a ramshackle house in an old neighborhood. We offered free pregnancy testing, a big deal back then.

Grocery shelves were only on the cusp of stocking easy do-it-yourself at-home pregnancy testing kits. Instead, you made a doctor’s appointment to confirm your suspicions.

So, a free, confidential walk-in test done on the spot was a gift, especially if you were scared, alone, poor.

Giving a woman her results was a spiritual experience. Either a negative or positive test could bring deep emotion — fear, disappointment, joy, panic, loneliness, betrayal, relief.

It was moving to be with another in a moment of such deeply personal revelation. Ultimately, we wanted each woman to know she and her child deserved dignity and that we would help.

Advent and pregnancy have much in common. Advent is all about anticipation, a looking forward to a mystery yet to be revealed. Like pregnancy, Advent speaks to expectation, but not to certainty. Advent, like pregnancy, invites us into a hopeful future that lies before us wrapped in a cloud of unknowing.

The Jewish people did not know the Messiah for whom they waited. In him, they invested hope without understanding. Pregnancy brings that ambiguity, that hope in the unseen.

I experienced three pregnancies, two of which took me through Advent.

That’s probably why, for me, the early words of Luke are among my favorite Scripture passages. Gabriel’s visit to Mary is loaded with emotion. Imagine the fear and perhaps even panic of young Mary.

Despite the bold words of the Magnificat — God “has thrown down the rulers from their thrones but lifted up the lowly,” — Mary’s personal experience must have been similar to countless women before and since who have experienced a surprise pregnancy.

Someone is growing within me, a stranger close to my heart.

When the angel Gabriel delivers God’s wish that Mary bear the Savior, he also reveals that her cousin Elizabeth is with child, “for nothing will be impossible for God.”

Those consoling Advent words are soon followed by the two words in Luke’s Nativity story on which I often dwell — “in haste.”

Those words describe how Mary journeyed from the north, down from her home in Galilee, to the hill country of Judah, or Judea, to visit Elizabeth. On the map, it doesn’t look so far, but for a young girl on foot it was a daunting expedition to the arid land of her cousin.

“In haste” tugs at my heart, describing the rapid, anxious footsteps of a girl seeking solidarity with another woman, another woman also surprised by new life. My two daughters, named Elizabeth and Maria, remind me of this female alliance, this partnership of women.

During my days working at the pregnancy center, we were hoping for another child. Elizabeth was heading for kindergarten and no brother or sister had yet appeared in our future. We were disappointed but undaunted.

One day, things were slow at the pregnancy center and no drop-ins appeared. I knew that once again, this month offered hope for us, a hope that had been dashed many times.

I’ve forgotten exactly how those old tests worked, but I know it was very early for this particular test to be accurate for me. I gave it a shot anyway.

I remember that the positive strip was very pale. We probably would have suggested to a client that she come later for a retest. But I knew. I experienced a deep sense of presence that day, as if I were not alone in the little office any longer. It was as if my personal angel had appeared in that pale strip of paper.

I was being invited to journey yet again in expectation and mystery. During Advent, we each experience that invitation in different ways. With God, all things are possible.

(Caldarola is a freelance writer and a columnist for Catholic News Service.)

PREVIOUS: A people of patience

NEXT: Advent joy for imperfect Christians