A way forward on immigration 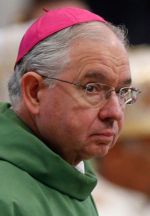 The Catholic bishops of the United States have designated Dec. 12, the feast of Our Lady of Guadalupe, as a national day of prayer for migrants and refugees.

This day of prayer comes at a time of fear, unrest and uncertainty in our country — especially for our immigrant brothers and sisters who are undocumented and their children and loved ones.

Everyone agrees that our immigration system is broken — and it has been for more than a decade. The blame cuts across party lines and we cannot find many examples of moral leadership or political courage to point to.

We are deeply concerned about the president-elect because of his drastic campaign promises regarding deportations.

But we also know that the outgoing administration has deported more than 2.5 million people in the past eight years — more than any other administration in history. And the vast majority of those deported are not violent criminals. In fact, up to one-quarter are mothers and fathers that our government is seizing from ordinary households.

That is the sad truth about immigration policy in America today. Our system has been broken for so long, our politicians have failed to act for so long that the people we are now punishing have become our neighbors.

Most of the 11 million undocumented people in the U.S. have been living here for five years or more. Two-thirds have been here for at least a decade. Almost half are living in homes with a spouse and children.

In addition, there are an estimated 1.8 million young people who were brought here as children by their undocumented parents. They are living in a kind of limbo — in many states they cannot enroll in college or get jobs.

This is the human reality of being undocumented in America. We have millions of people living on the edge of our economy and society, living in constant fear that one day without warning they will be deported and never see their families again.

And when you look into the eyes of a child whose father has been deported — and I have done that — we realize how inadequate our politics is.

Undocumented immigrants have become a kind of “scapegoat,” an easy target to blame for broader problems in our economy and society.

Many of our neighbors today rightly feel vulnerable and unprotected — they are worried about jobs, wages, the decline of their communities, the threat of terrorism, the security of our borders. We cannot simply dismiss their concerns or label them as nativists or racists, as some have. What our neighbors are worried about is real and we need to take their concerns seriously.

But undocumented workers are not the problem. The real problem is globalization and deindustrialization and what that is doing to our economy, to our family structures and neighborhoods. This is not a “white working class” issue only, as the media reports it. Whites, Latinos, Asians, blacks and others are all suffering from the breakdown of the family and the vanishing of good-paying jobs that make it possible to support a family.

Right now, we need to stop allowing politicians and media figures to make immigration a “wedge issue” that divides us. We need to come together to study these issues and find solutions.

The truth is there actually is broad public consensus on a way forward.

There is broad agreement that our nation has the obligation to secure its borders and determine who enters the country and how long they stay. There is also broad agreement that we need to update our immigration system to enable us to welcome newcomers who have the character and skills our country needs to grow.

There is even broad consensus on how to deal with the undocumented persons living among us.

Virtually every poll has found overwhelming support for granting them a generous path to citizenship, provided they meet certain requirements, such as learning English, paying some fines and holding a job that pays taxes.

These basic points should form the basis for immigration reform that is just and merciful.

We have a consensus in public opinion. What we are waiting for is politicians and media figures who have the will and the courage to tell the truth and to lead.

PREVIOUS: Are your grandparents lonely?

NEXT: An enduring economic revival