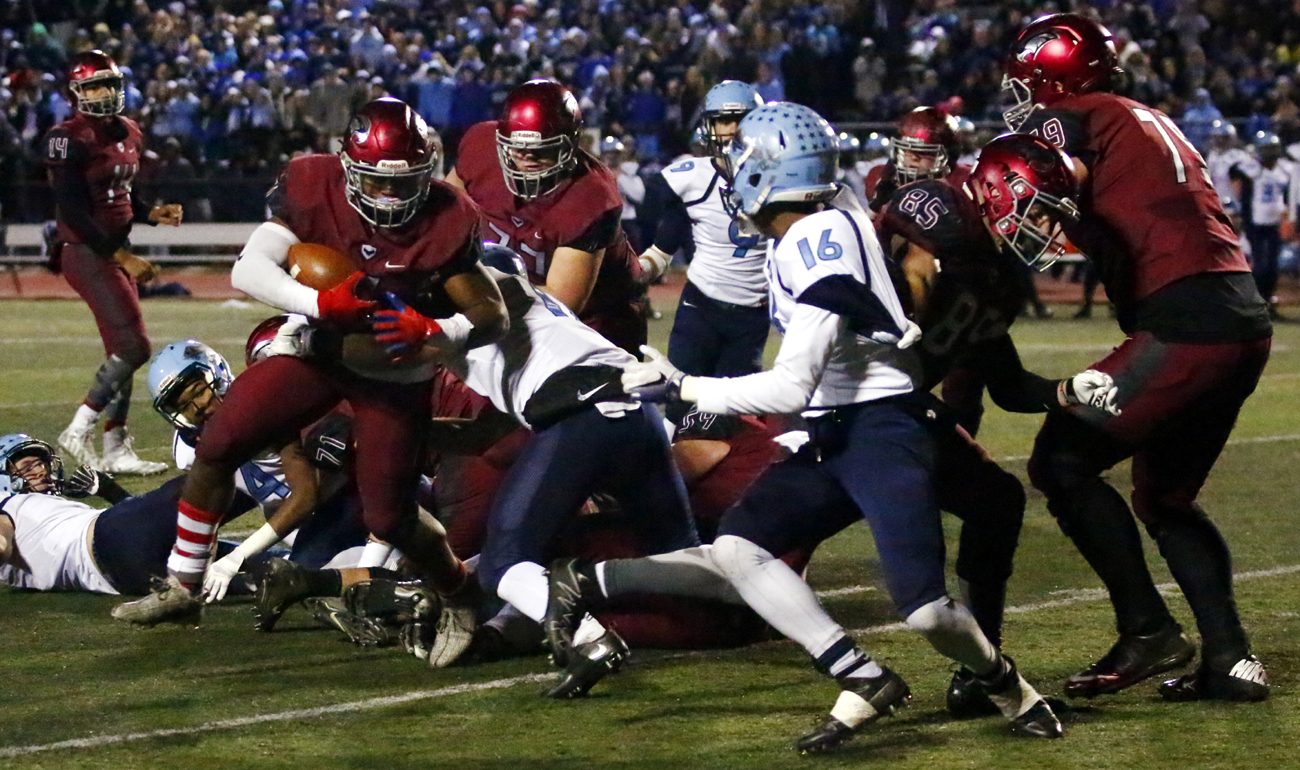 St. Joseph's Prep running back D'Andre Swift, carrying the ball during the PIAA Class 6A semifinal game against North Penn, came up big in the championship game Dec. 10 against Pittsburgh Central Catholic by rushing 27 times for 161 yards and three touchdowns in the 42-7 win. (Sarah Webb)

Before the PIAA Class 6A state football championship Saturday night, Dec. 10 in Hershey, there was concern that St. Joseph Prep’s might have met its match.

The trepidation was all for naught.

Playing arguably their best game in every phase, the Hawks proved no match for Pittsburgh Central Catholic. Shrugging off a scoreless first quarter, the Prep scored two touchdowns in each of the final three stanzas en route to a 42-7 victory.

While snaring its third state crown in four years against a 14-2 team that had averaged more than 50 points per game, the Prep thus became the second team in Catholic League history to finish 14-0; La Salle did likewise in 1996.

“We just followed our preparation and everyone did their assignments,” said senior cornerback and wide receiver Richard Carr. “We just played together as a team and played our style of fast physical football.”

Although their defense was generally stout — especially during their six-game run in the post-season, during which it surrendered seven points or fewer on three different occasions — the Hawks’ offensive numbers were over-the-top impressive.

Outside of scoring 22 points against Roman Catholic in their fifth game, the Prep tallied 35 points or more in each of its other 13 games, including precisely 35 points an uncanny five times.

Asked about the Prep’s strategy a few days before the state final, coach Gabe Infante kiddingly (or perhaps half-kiddingly) said, “Give the ball to number seven.” He was referring to University of Georgia-bound running back D’Andre Swift.

Swift turned 27 carries into 161 yards and three touchdowns. It was fitting that Swift started the scoring with a 34-yard run and finished the game – and season – with a six-yard TD scamper. In between, he added a one-yard touchdown plunge to end the third quarter.

In nine games (technically 10, but in one contest, he only carried once as a decoy), Swift amassed 1,564 yards on 149 carries and added 405 yards on 21 receptions, finishing with 30 total touchdowns. Swift saved his best work for his final three performances – 747 yards and nine touchdowns on 76 carries.

“It was a wonderful season,” said Swift, who dealt with a nagging leg injury that cost him significant playing time throughout the first half of the campaign. “It really does start with the guys up front. If they don’t do their job, I can’t do mine.”

Among the offensive line stalwarts to whom Swift referred were center Mack Grey; guards Jackson Evans and Carter Lynch; and tackles Sal Cinaglia and Taron Hampton – all seniors. Those five were largely responsible for opening the early holes through which Swift plied his trade.

They also helped provide junior quarterback Marquez McCray enough time to complete 12 of 22 attempts for 171 yards and a 35-yard touchdown toss to junior Darryle Simmons (4 catches for 88 yards). McCray finished the season with 149 completions for 2,164 yards and 21 touchdowns.

McCray’s main receiver, senior Terrance Greene, caught six passes for 88 yards and a 20-yard touchdown on a trick-play pass from Carr. For the season, Greene led the squad with 48 catches for 741 yards and 12 total touchdowns – nine of them receiving. Over the past three games, Greene caught 18 passes for 250 yards and five touchdowns.

At times this fall, the Prep’s dominance sometimes took a while to unfold, as it did against Pittsburgh Central Catholic. However, once that occurred, the Hawks’ opposition was cooked.

“After the third quarter, when (PCC) was on defense, you could see their defensive line was exhausted,” said Carr. “Hands on their knees and players not really getting in their stance. On the offensive side, the players started arguing with each other and tried to take cheap shots at us. I knew that it was ours from there.”

Senior middle linebacker James Johnson, who had 14 tackles, two sacks and a forced fumble, said that “no moment can define my Prep experience,” not even starring in the marquee event of the fall.

“The game was a summation to a great season,” said Johnson. “We all left everything on the field. Seeing how hard the guys worked and seeing how we played put the finishing marks on our great story.”

Coach Infante was humbled by his team’s amazing ride.

“I am just grateful,” said Infante, “they allowed me to be a part of their journey.”