Undefeated seasons, trip to state finals on the line for 2 local teams 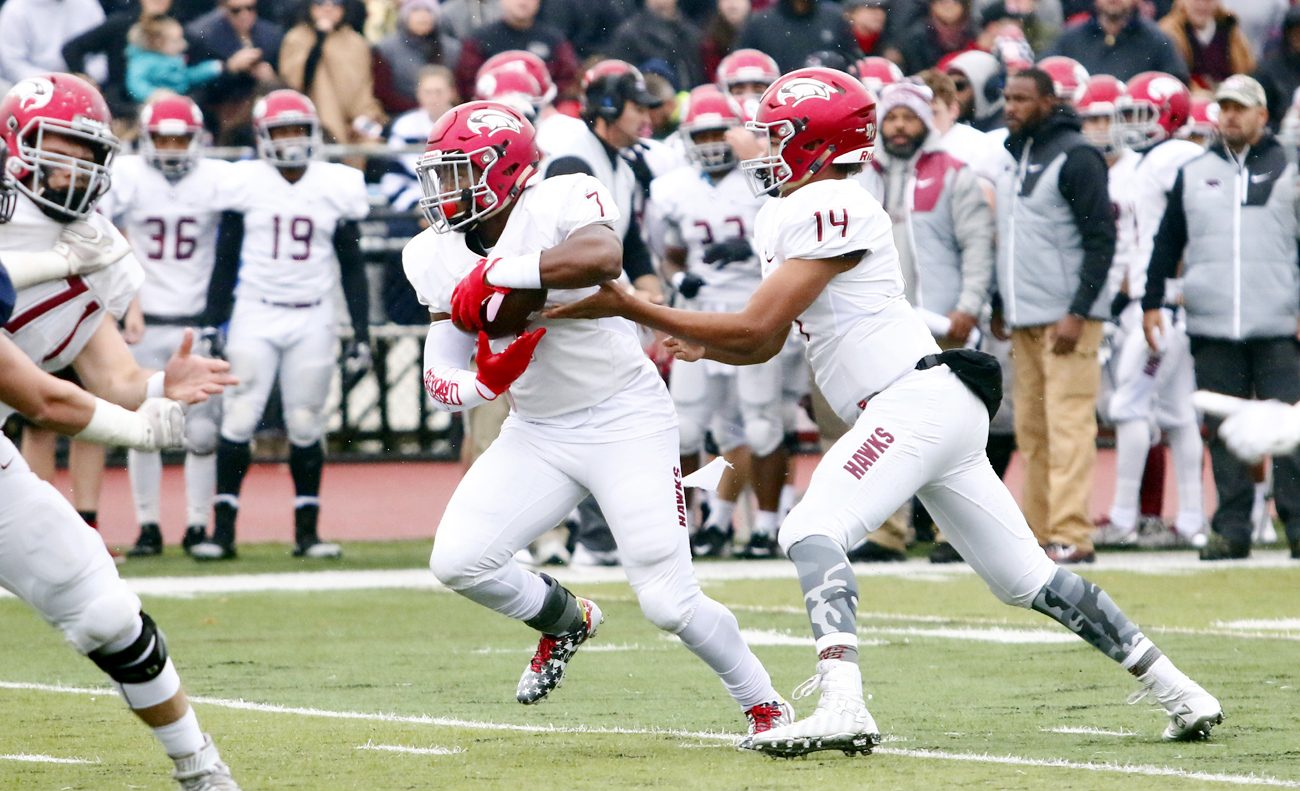 St. Joseph's Prep quarterback Marquez McCray hands the ball off to running back D'Andre Swift in a Philadelphia Catholic League game last October. The two expect to be key contributors as the Prep takes on North Penn High School of Montgomery County in a PIAA Class 6A semifinal game Dec. 3. The winner will advance to the state championship. (Photo by Sarah Webb)

A perfect season in any sport is rare. St. Joseph Prep’s football team is two games away from achieving such an anomaly.

At 5 p.m. Saturday, Dec. 3, the Hawks will meet North Penn at Northeast High School in a Class 6A state semifinal. The winner will move on to next week’s state championship in Hershey.

“We are confident in ourselves and our ability to play well in these situations,” said Bryce. “We’ve been consistent all year and have a goal in mind to get to the state championship. We play for one another, especially the seniors who have done a great job leading us this year.”

At the beginning of the season, a common theme emanated from the Prep’s upperclassmen when asked about their collective goals. Not only did they mention the Catholic League championship, district title and state crown, they talked about the very real possibility of not losing a single game.

At 12-0, that lofty accomplishment is within reach. To punch their ticket to Chocolate Town, they first must defeat a North Penn squad that will enter the contest with precisely the same goals – finishing undefeated and winning the state title.

The Knights are 14-0. The only common opponent between them and the Hawks was La Salle, which North Penn defeated in both teams’ season opener, 33-24, on Aug. 26. The Knights struggled against Garnet Valley in the state quarterfinals last week before surviving a 48-38 slugfest.

The Prep, however, would take North Penn just as seriously as any other team, regardless of its opponent’s record.

“We are 0-0 going into this game,” said star senior running back D’Andre Swift. “We always feel good going into any game because our preparation allows us to. That’s just the field general (junior quarterback Marquez McCray) putting us in great situations by trusting his reads and making plays.”

Shaking off a nagging leg injury that cost him almost half the season, Swift is fully healthy and is supplying rather ridiculous numbers. In the past four games, he has carried the ball 49 times and gained a jaw-dropping 653 yards while scoring nine touchdowns. That’s usually a season’s worth of production for most standouts.

“Nothing happens without the big men up front,” Swift said. “They are the reason why we can do what we do as an offense.”

Prediction: As well as North Penn has played, it is difficult to comprehend this Prep team losing to anyone. The Knights show they belong, but the Prep will prevail, 35-21.