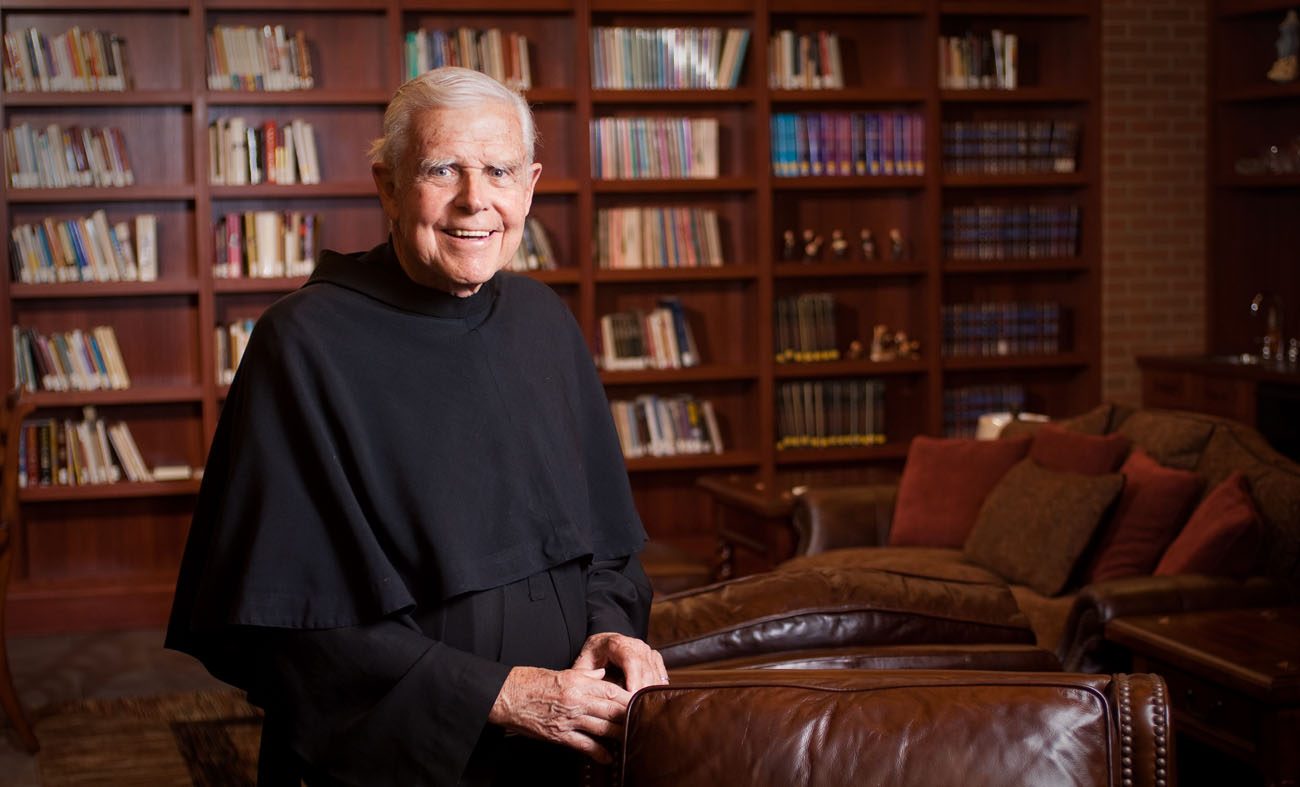 STEUBENVILLE, OHIO (CNS) — Franciscan Father Michael Scanlan, whose name is almost synonymous with the Franciscan University of Steubenville, died Jan. 7 at Garvey Manor, a Catholic nursing home in Hollidaysburg, Pennsylvania, after a long illness. He was 85.

The priest transformed the struggling College of Steubenville — now known as the Franciscan University of Steubenville — in the 1970s. He was its longtime president — from 1974 to 2000 — and then chancellor at the university from 2000 to 2011 when he retired. The school became a university in 1980 and changed its name in 1986.

Father Scanlan’s funeral arrangements reflect his involvement not only at the school but also his roots with his order: Third Order Regular Province of the Most Sacred Heart of Jesus, based in Loretto, Pennsylvania.

A viewing and wake was scheduled Jan. 10 at the university’s Christ the King Chapel and a memorial Mass was to be celebrated at the school’s fieldhouse Jan. 11. A viewing and vigil service also was to be held Jan. 11 at St. Francis Friary in Loretto, followed by Mass of Christian Burial Jan. 12 at the Chapel of the Immaculate Conception at St. Francis University, Loretto.

Father Scanlan, whose 1997 autobiography was titled “Let the Fire Fall,” was described by the provincial of his order, Franciscan Father Richard Davis, as “one of the most obedient, charitable, humble, and very holy men in our community.”

“The good he has done for the Province of the Most Sacred Heart of Jesus, for the order, and most importantly, for the entire church is a tremendous source of honor. I thank God he was my brother, my mentor, and my friend,” he said in a statement.

Franciscan Father Sean Sheridan, president of Franciscan University, said Father Scanlan is “rightfully credited with revitalizing the Catholic and Franciscan mission of the university” and with working with school leaders and students, emphasizing the importance of campus ministry and theology “now, by far our largest major.”

He said Father Scanlan also “led countless people into a deeper relationship with Jesus Christ and the Catholic Church. It is, perhaps, most of all for his spiritual fatherhood that so many will remember him with gratitude.”

Father Scanlan was born in 1931 in Cedarhurst, New York. He received a bachelor’s degree from Williams College, in Williamstown, Massachusetts, and law degree from Harvard University in 1956. After serving as staff judge advocate in the Air Force, he decided to become a priest and was ordained as a Franciscan Third Order Regular in 1964.

The priest was an early leader in the Catholic charismatic movement in the United States and wrote or co-authored more than 16 books and pamphlets about faith life.

In the summer of 1975, Father Scanlan hosted a summer conference on campus for priests, followed a year later by a Catholic evangelistic conference for teens. These conferences, now called Steubenville Youth Conferences, attract more than 55,000 high school youth and adults at dozens of conferences each summer in the U.S. and Canada.

A champion in the pro-life movement, Father Scanlan established President’s Day in January so students could attend the national March for Life in Washington without missing classes. In 1989, he was jailed after participating in a peaceful protest outside a Youngstown, Ohio, abortion clinic.

Father Scanlan received many honors during his lifetime, including the Pro Ecclesia et Pontifice Medal from Pope John Paul II in 1990 for distinguished service to the church.

When he was asked in a 2013 interview what was most important to him, he said it was living faithfully as a Franciscan and “being able to be sent wherever God wants you to serve his people.”