Only 5 games in, Neumann-Goretti is already dominating league

Leading Neumann-Goretti with 22 points in a 70-42 victory over Father Judge on Jan. 17, Dhamir Cosby-Roundtree topped the 1,000-point mark for his scholastic career. (Sarah Webb)

At an individual level, the same sentiment applies for senior Dhamir Cosby-Roundtree.

In a 70-42 victory over Father Judge on Jan. 17, Cosby-Roundtree poured in 22 points. Among them was career point number 1,000. Through five CL contests, the Villanova University signee is averaging 16.6 points per game, and the Saints have dominated each of their five opponents by margins of 12, 31, 55, 34 and 28 points.

Included in the carnage was two-time defending champion Roman Catholic, a stunning 87-53 romp on Jan. 11 that strongly suggested that Neumann-Goretti is way ahead of the other 13 CL squads.

“We played better defensively and brought a lot of intensity,” said Cosby-Roundtree, whose donation included several dunks and ally-oop conversions. “That helped us get a lot of transition buckets. I tried to put myself in good position.”

What’s frightening about Neumann-Goretti is that Cosby-Roundtree isn’t even the best player – or scorer – on his own team. That distinction belongs to Quade Green, the University of Kentucky-bound senior who averages 20.4 points per game, four more than Cosby-Roundtree.

Add junior Noah Warren (12.8), sophomore Christian Ings (10.8), and junior Marcus Littles (9.0) to the lineup, and it’s no wonder the rest of the CL coaching contingent emerges frustrated and confounded while the Saints march up and down the hardwood.

“To play in the Catholic League is an honor,” said Cosby-Roundtree. “It’s one of the most respected leagues in the country.”

Cosby-Roundtree intimated that Neumann-Goretti feels as though it allowed the past two Catholic League championships to slip from its grasp. He said the Saints have learned their lesson.

“We are trying to win the Catholic League,” said Cosby-Roundtree. “I haven’t won one of those as a starter. We are doing everything we can to get to the next step. For me, I’m buckling down and doing whatever is needed.” 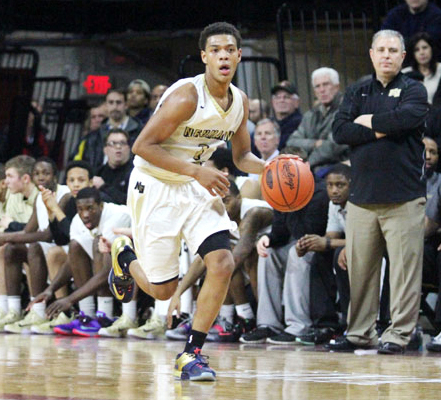 Around the Catholic League:

For Cardinal O’Hara (0-5), senior Jaye’lyn Peebles scorched La Salle for 40 points, but his teammates added only 28 in a 70-68 defeat. Peebles also scored 30 against Archbishop Carroll … Roman Catholic (4-1) now has senior Jon-Paul Sanders back after missing the first third of league play. He scored 22 in a win over Lansdale Catholic … Archbishop Ryan senior Izaiah Brockington has led the Raiders (12-2 overall, 3-2 league) in scoring the past five weeks, though senior Matiss Kulackovskis tied him with 15 against Bishop McDevitt.

In a 50-45 win over La Salle, it was the case of the Lucky Elevens for victorious Archbishop Carroll (3-2), as senior Jesse McPherson, junior Justin Anderson, and freshman AJ Hoggard each came up with snake eyes …  Conwell-Egan (2-3) dropped a 92-61 decision to Archbishop Wood, but junior Patrick Robinson netted 26 points while junior James Leible added 18.

Father Judge (3-2) looks like a sure playoff team, as its two losses were to juggernauts Neumann-Goretti and Roman Catholic. Senior Marc Rodriguez’s 22.6 ppg leads the CL in scoring. He dumped 34 against West Catholic and 27 earlier in a 68-60 success at Archbishop Wood … Aside from a lopsided loss to La Salle, Lansdale Catholic (1-4) has lost by 13, eight and six points. The Crusaders have particularly benefited from two seniors – Starkey Gabel, who scored 21 against West Catholic and 17 at Roman Catholic; and senior Craig Rosenberger (22 versus the Prep).

Three of the four leading scorers for La Salle (2-3) are underclassmen. The senior? Jarrod Stukes, who has scored nine or more points in 13 of the Explorers’ 14 games; eight times in double figures and nine points on five other occasions … The tandem of senior Quentin Beasley (15 against Roman Catholic, 10 versus Archbishop Ryan) and junior Tahmir Thompson (11 and 12 points in respective games against Lansdale Catholic and Bonner-Prendergast) has supplied highlights for Bishop McDevitt (0-5).