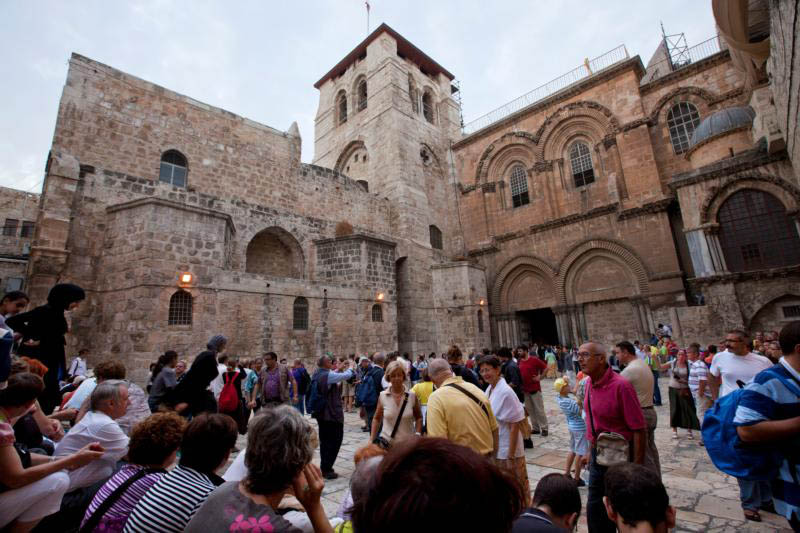 Pilgrims gather outside the ancient Church of the Holy Sepulcher in the Old City of Jerusalem. When did Christians actually get church buildings, built for the purpose of worship? Not until the middle of the third century — no later than 260. (CNS photo/Jim Hollander, EPA)

When we hear the word “church” we think of the universal community to which we belong or of a physical structure, which can take many different shapes.

Somewhat surprisingly, the New Testament does not say. The Gospels show Jesus in a variety of places, including synagogues, although he was not very popular there. Most accounts of his preaching show him outdoors, in plane areas, on hills, by water. The Gospels make it clear that he wanted his message to reach as many people as possible, so he chose outdoor environments.

The same was true of his disciples. The scriptural book, the Acts of the Apostles, shows Peter preaching on the steps of the Temple in Jerusalem or wherever he could find a crowd.

Acts mentions that the apostle Paul rented the hall of Tyrannus so he could preach. There would have been nothing special and certainly nothing Christian about a rented hall, but it met Paul’s immediate needs.

But obviously the Christians needed more permanent places of their own. Here we have more information. When the apostle Peter escapes from prison in Jerusalem, he goes to the home of the mother of John Mark where the local community has met to pray. Since they are praying as a group, this was a liturgical event.

When Peter gets to the door of this woman’s house, the first person he meets is a servant woman — in those days, a slave — which means that this is the house of a wealthy person, indicating that it could hold a number of people for a liturgy.

A final piece of evidence occurs in the apostle Paul’s Letter to Philemon, in which he greets the church that meets in Philemon’s house.

There is evidence that the person who owned the house often presided at the liturgies and meetings, but that is not conclusive.

So when did the Christians actually get church buildings, built for the purpose of worship? Not until the middle of the third century — no later than 260 — and the first building is in what is now Iraq.

If it sounds surprising that it took so long for the first church building to be constructed, we must consider several factors.

First, most of the early Christians, including Paul himself, expected the imminent end of the world. More than that, most expected to be alive when it happened.

Second, the emperor Nero persecuted the Roman Christians in the year 64. That did not lead to empirewide, continuous persecution for three centuries, but it did make the Christians wary about putting up any kind of permanent structure and certainly not large or imposing ones.

The real church construction occurred in the fourth century when the Roman emperors had converted to Christianity. They provided not only permission to build but also donated funds. Several of these imperially inspired churches are still standing in the city of Rome.

But the generation that knew Jesus never saw a church building.

PREVIOUS: Jesus shows how the Father wants us to follow the law, beyond its letter