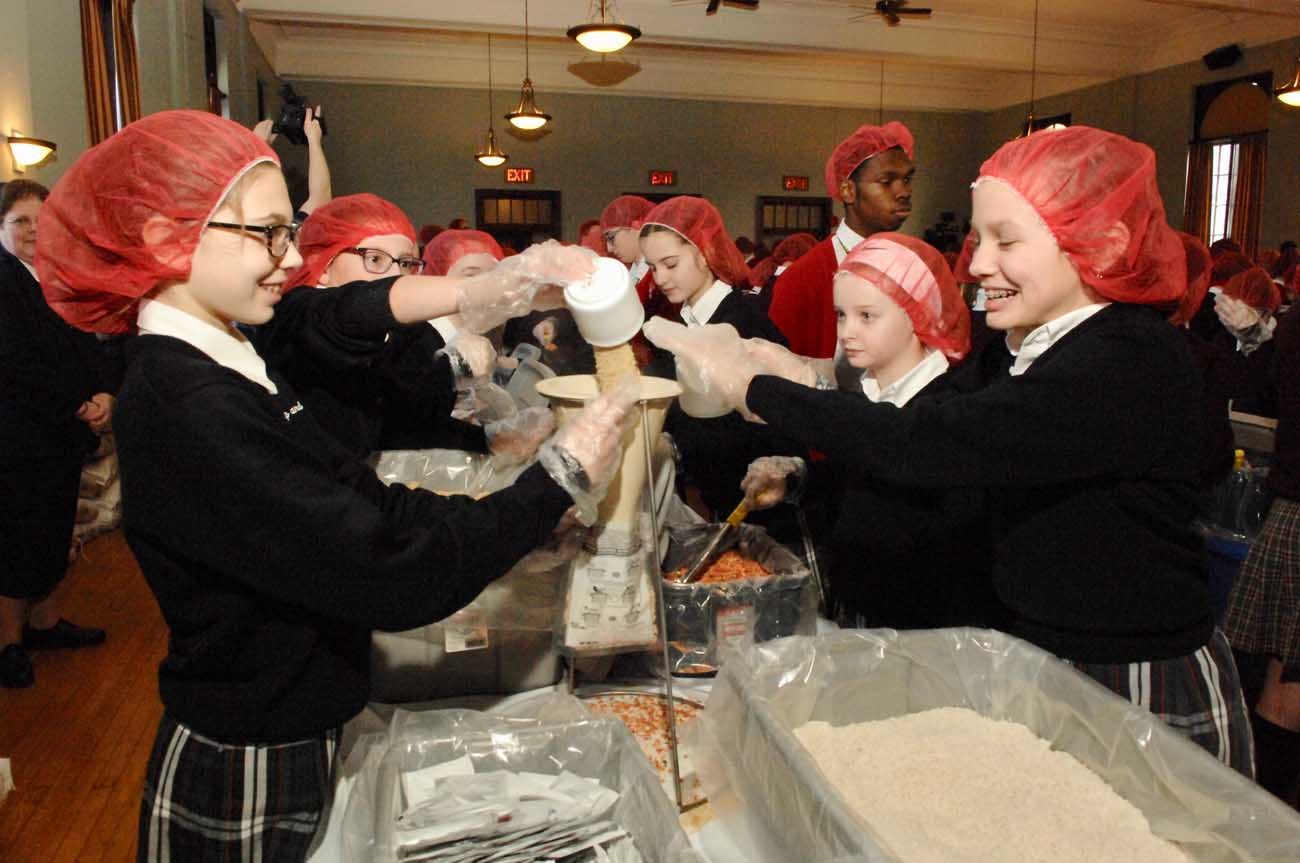 Students fill one of 50,000 meal bags during the Helping Hands activity Feb. 2 at St. Charles Borromeo Seminary. Each bag will feed a family of six, and all will be delivered to Catholic Relief Services clients in Burkina Faso, West Africa. (Photo by D'Mont Reese) 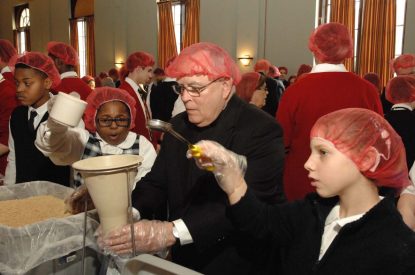 Almost 14,000 Catholic high school students in the Philadelphia Archdiocese will gain a new appreciation of their connection to needy people around the world thanks to a partnership with Catholic Relief Services announced Feb. 2 at St. Charles Borromeo Seminary.

Under the arrangement, lesson plans and hands-on activities dealing with issues of global poverty will be integrated into the curriculum for all grade levels at the 17 archdiocesan high schools plus the private Merion Mercy Academy.

Sean Callaghan, CEO of Catholic Relief Services, said the participation by Philadelphia in the CRS Global High School partnership is the largest of its kind in the United States.

To announce it and to show the scale of aid to people overseas that the partnership represents, some 800 students came from the high schools, special education schools and several Catholic grade schools to the seminary to prepare 50,000 dried-goods meals for people served by CRS in Burkina Faso, West Africa.

Archbishop Charles Chaput, his four auxiliary bishops, officials in Catholic education and CRS plus the principals and student council representatives of the 18 high schools joined the rest of the students in one morning session of the day-long Helping Hands project.

“Today we are bearing witness to our young people embracing their duty to others through tangible acts of love,” the archbishop said. “Our schools do much more than provide a quality education. They seek to foster the holistic formation of young men and women based on the values of the Gospel. They seek to create global citizens who imitate the love and compassion of Christ in all of their actions.”

He called the Helping Hands project “a big first step” for the new partnership with CRS, “and a clear statement that our schools are communities of faith, knowledge and service.”

The project coincided with the Catholic Schools Week observance in the archdiocese and throughout the U.S. last week. Since the week’s theme was “Celebrate Vocations,” seminarians from St. Charles and two junior professed novices with the Sisters, Servants of the Immaculate Heart of Mary spoke about vocations to the students.

In each of five shifts beginning at 8 a.m. Feb. 2, students filled bags with a rice-soy mix, dried vegetables and a vitamin packet. Each bag can provide one meal for a family of six.

Some students worked together at long tables filling the bags, while others ran them across the seminary’s auditorium to other students who packed the bags in shipping boxes. Seminarians kept refilling the students’ rice and vegetable bins from 50-pound sacks.

Every few minutes a gong was sounded, indicating another 1,000 bags had been filled. The goal of each shift was 10,000 bags.

The initiative is not new to the Philadelphia Archdiocese, as students at Archbishop Wood High School took part in it at their school last year, and it was a major hands-on activity at the 2015 World Meeting of Families in Philadelphia.

But last week’s large-scale project highlighted the level of similar activities that will be taking place in each of the high schools throughout the year, joined by the integrated classroom lesson plans.

For those participating in Helping Hands, the link between themselves and the global poor through education and service came through clearly, and loudly, despite the beat of dance music pumping in the auditorium as they worked.

“It’s such a great thing to do,” said Olivia Szczepanski, an 11th grader at Archbishop Ryan High School in Philadelphia. “I always love helping people and I think that with Catholic Relief Services it’s a great opportunity be young and embrace life and help others. It’s just a beautiful thing.”

One of a contingent of 40 Ryan students at the activity, Szczepanski said she hoped to learn more about the problems people in other countries face, and ways that she can help.

“At my school there are so many opportunities that we get,” said Szczepanski. “They are always telling us the many things we can do to get involved, (including) with Catholic Relief Services. It just feels like we are helping so much.”

Her classmate, Joseph Hagger, recognized the project as something tangible he could do “for people that we don’t have contact with and most likely never will. It’s a good chance to do a lot of good things.”

Leroy Brown, the student council president of Roman Catholic High School in Philadelphia, said the day was “really rewarding” for himself and the 20 students accompanying him from the all-boys school.

“We forget to reflect on other people who need our help. So we’re fortunate and excited to do this today,” said Brown, adding his schoolmates and all the others were “having fun and they’re really excited.”

“It’s nice for them to see service on a larger level than just their own parish,” she said. “We’ve all done something this week to give back to our local community but this is working with the world, with Catholic Relief Services. It’s a wonderful lesson for them to come out and see this for themselves and be a part of it.”

Auxiliary Bishop Michael Fitzgerald, who oversees Catholic education in the archdiocese, told the students that when they see news of poverty, war and suffering in the world, “there is a temptation to think, what can I do about it? Today you can make a difference in the world. We’re doing something very real, that our faith challenges us to think about.”

The partnership between the schools and CRS “provides educational resources that help make you and I globally aware and, as of this moment today, locally responsible so that each of us personally and together may ask the question, who is my brother and who is my sister?” said Sister Maureen McDermott, I.H.M., archdiocesan superintendent of secondary schools.

Those classroom resources available through the partnership will help “to build up our Catholic identity in schools” as places of “faith in action,” she said.

PREVIOUS: Schools set to close Thursday, with snow on the way

NEXT: Tales of love and marriage show the power of commitment