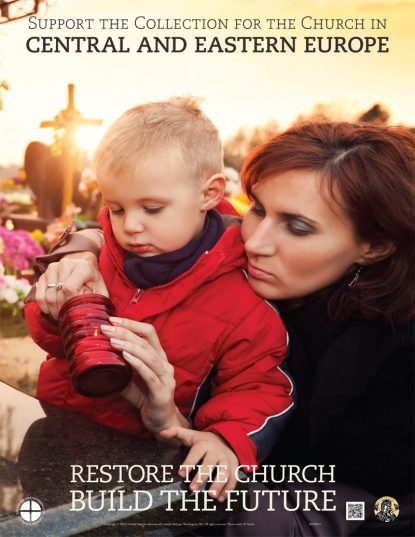 The poster for the 2017 Collection for the Church in Central and Eastern Europe.

Ash Wednesday and the beginning of Lent is just around the corner on March 1, and that day also brings the annual Collection for the Church in Central and Eastern Europe.

Archbishop Charles Chaput received a letter dated Feb. 3 that reported Catholics in the Archdiocese of Philadelphia gave $228,097 to last year’s collection that helped clergy, religious and lay leaders “renew the capacity of the church in countries formerly under Soviet rule,” wrote Cardinal Blase Cupich, the archbishop of Chicago and chairman of the U.S. bishops’ subcommittee for the collection.

Twenty-eight countries in the region are supported by the collection that can help American Catholics “express our missionary discipleship through this collection” even if they do not travel to Eastern Europe, Cardinal Cupich wrote.

“Each contribution made offers a helping hand to a brother or a sister, who with limited resources is working to rebuild faith and capacity for ministry in a region that suffered religious persecution for many decades,” he wrote.

Cardinal Cupich described one example of aid such as support for a summer camp for youth in Estonia and ministry to young people throughout the year in the capital city, Tallinn.

“These kinds of programs have helped the Catholic community in Estonia to grow from two communities, one priest and about 100 faithful at the height of Soviet-era persecution to nine parishes and over 5,000 faithful today,” the cardinal wrote.

More information on this year’s collection to be taken up on Ash Wednesday can be found at the website usccb.org/ccee/collection.

PREVIOUS: Celebrating, supporting marriage is not only good, but necessary

NEXT: Eucharistic adoration catching on with Lansdale Catholic teens