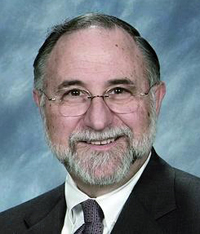 Deacon Joseph P. Orlando, a permanent deacon of the Archdiocese of Philadelphia who was released for service to the Diocese of Camden, died on Feb. 19 at Thomas Jefferson University Hospital, Philadelphia, from complications related to surgery to treat intestinal cancer.

Deacon Orlando was ordained on June 4, 2000 at the Cathedral Basilica of SS. Peter and Paul, Philadelphia, by Bishop Robert P. Maginnis.

He was assigned to St. Bede the Venerable Parish, Holland, where he remained until his eventual release to the Diocese of Camden in 2006. While in the Camden Diocese, Deacon Orlando served at St. Damien Parish in Ocean City, N.J.

Deacon Orlando earned a Bachelor of Science degree from Temple University in 1980. He retired from IBM Corp. in 2003, where he had been a project manager for many years. Between 2003 and 2006, Deacon Orlando was employed as the business manager at St. Bede the Venerable Parish, Holland.

He is survived by his wife of nearly 50 years, the former Kathleen (Kate) Lamb. They would have celebrated their 50th wedding anniversary next Saturday, March 4. Deacon Orlando is also survived by four sons: Joseph, Sean, Christopher, and Michael, as well as eight grandchildren.