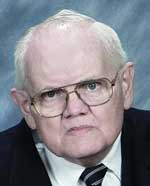 He was ordained at the Cathedral Basilica of SS.  Peter and Paul on June 2, 1996 by Cardinal Anthony Bevilacqua and served at Maternity B.V.M. until his retirement from active ministry in 2013.

Deacon Heaney, who was an accountant by profession, received his Bachelor of Science Degree from La Salle University and his MBA from Temple University.

Married to his wife of 52 years Patricia Anne (O’Donnell) Heaney, he was the father of three children.

Originally from St. Helena Parish, Philadelphia, he and his wife raised their children in Maternity Parish, where the family relocated in the mid-1970s, according to his son, Joseph.

“If anyone asked him what his career was, he probably would have said deacon,” his son said. “He was a very loving, beautiful person, and he enjoyed helping people. I don’t think he ever said a bad word about anybody.”

In his later years Deacon Haney was living at Lafayette Redeemer Nursing Facility but even there, when priests would come to say Mass, he would assist at the altar, his son said.

The funeral Mass for Deacon Heaney was celebrated Saturday, Feb. 11. Bishop Michael Fitzgerald was the principal celebrant. Father Paul Quinter, pastor of Maternity, was a concelebrant and the homilist.

In addition to his wife, Patricia Anne and son Joseph (Debbie), Deacon Heaney is survived by his son John (Karen), his daughter, Kathleen Starkey (Brian), his grandchildren, Lauren, Patrick, Elizabeth, Katherine and Benjamin and his sisters, Ann Berry McGee and Maureen Mickler.

Interment was at Resurrection Cemetery, Bensalem.

NEXT: Michael Novak, noted theologian, philosopher and author, dies at 83