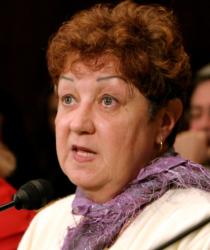 The New York Times said a New York journalist named Joshua Prager, who interviewed her many times for a book he is writing about the Roe decision, confirmed that she had died. The cause of death was heart failure. Her funeral will be private, family members said.

McCorvey became a pro-life supporter in 1995 after spending years as a proponent of legal abortion. She also became a born-again Christian. A couple of years later, she said she felt called to join the Catholic Church of her youth. Her mother was Catholic and her father was a Jehovah’s Witness. After instruction in the faith, she was accepted into the church in 1998.

The family thanked the “many people across America and around the world who, in these days, are expressing their condolences, their prayers, and their gratitude for the example Mom gave them in standing up for life and truth. Though she was the Jane Roe of Roe v. Wade, she worked hard for the day when that decision would be reversed.”

McCorvey’s family said Priests for Life would be organizing memorial Masses and other services around the country “to give more people an opportunity to remember Mom’s life and work.”

Born in Simmesport, Louisiana, Sept. 22, 1947, Norma Leah Nelson was raised briefly at her family’s home in Lettsworth, Louisiana. The family later moved to Houston. McCorvey was 13 when her father left. Her parents divorced, and she and her older brother were raised by their mother, Mildred, an alcoholic who was known to be violent toward her children.

Norma married Woody McCorvey when she was 16. When she was pregnant with the couple’s first child, she moved in with her mother, alleging Woody had assaulted her. She gave birth to daughter Melissa in 1965. She struggled with alcoholism and came out as a lesbian. The following year, McCorvey became pregnant with her second child, who was put up for adoption.

In 1969, when she was 21 and became pregnant a third time, she tried to obtain an illegal abortion but had no luck as state authorities had shut down such operations. She was referred to lawyers seeking a plaintiff for an abortion suit against the state of Texas. The case took three years to reach the Supreme Court. McCorvey gave her baby up for adoption.

“I did sign the affidavit that brought the holocaust of abortion into this nation,” McCorvey said later. “(But) I found out about Roe v. Wade like everyone else did — in the paper.”

McCorvey said she was told that legalizing abortion would end back-alley abortions and “probably” put a stop to rape and incest. “They (the lawyers) had a hidden agenda,” she said. “They told me that they only wanted to legalize abortion in the state of Texas, but what they actually wanted to do was what they did — legalize abortion across the land.”

In 1994, after more than two decades of guilt-induced drug binges and various jobs at abortion clinics, McCorvey said she began to change her mind about the abortion industry, especially when Operation Rescue moved next door to her workplace, an abortion clinic in Texas.

She was particularly enchanted with the friendliness of two little girls, Emily and Chelsea, who were the daughters of Operation Rescue workers. “I was on the pro-abortion side so long, I didn’t know how to react to kindness and love that all these people and the children were showing me,” McCorvey recalled.

She became disillusioned with her job admitting women for first- and second-trimester abortions. Each weekend, according to McCorvey, clinic staff had to perform enough abortions to meet a $40,000 quota.

“What I didn’t understand at the time was that I was tiring of the abortion movement,” she said, adding she was “fed up with the lies and the mistreatment of the women” coming in for abortions.

When she started counseling women that they were under no obligation to go through with their abortions, reducing the weekend numbers, she was fired, McCorvey said.

In 1995, while attending a church service with Emily and Chelsea’s family, McCorvey answered an “altar call” to come forward and publicly accept Christ. In August of that year, she was baptized by the Rev. Flip Benham, then director of Operation Rescue National.

From there, increased contact with Catholic pro-life leaders both inside and outside the Dallas Diocese led to her decision to become a Catholic. She documented much of her conversion story in her 1997 autobiography, “Won by Love.”

After receiving instruction in the Catholic faith at St. Albert’s Priory at the University of Dallas, she became a Catholic Aug. 17, 1998. She received holy Communion and confirmation at a private Mass at St. Thomas Aquinas Church in Dallas and attended by more than 60 family members and friends from the pro-life movement.

Dominican Father Edward Robinson, who had instructed McCorvey in the faith for nearly two months, concelebrated the Mass with Father Frank Pavone, national director of Priests for Life, who also had a major role in McCorvey joining the church.

“While pro-abortion advocates used Norma McCorvey to advance their efforts to legalize abortion in the early 1970s, she spent the last half of her life attempting to right the terrible wrong … visited upon the country” by the court’s decision in Roe and its companion case, Doe v. Bolton, said Carol Tobias, president of National Right to Life.

“Norma became an outspoken advocate for protecting the lives of mothers and their unborn children. … (She) was a friend and valued ally in the fight for life and she will be deeply missed,” Tobias added in a Feb. 18 statement.

McCorvey “will be greatly missed from this world but is no doubt rejoicing in heaven with the lives she has helped to spare over her lifetime,” said Kristan Hawkins, president of Students for Life of America.

She became “one of the most widely-known and effective advocates for the preborn of her generation,” Hawkins added. “We cannot thank her enough and pray that she rests in peace.”