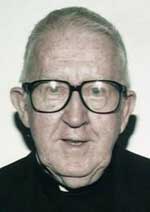 Born March 10, 1921 in Philadelphia, he was the son of the late Daniel Pyle Smith and the late Kathryn (Weaver) Smith. He attended Lowell Public School and Olney High School in Philadelphia before entering St. Charles Borromeo Seminary.

In 1975 Father Smith was appointed pastor of St. Joseph Parish in Downingtown, and named pastor emeritus there in 1991.

Father Smith is survived by his nephews and nieces. Interment was at St. Joseph Cemetery, Downingtown.

NEXT: Sister Marie Kerr, Franciscan and longtime nurse, dies at 87