Cardinal Dolan lauds ‘communion of friends’ at Neumann U 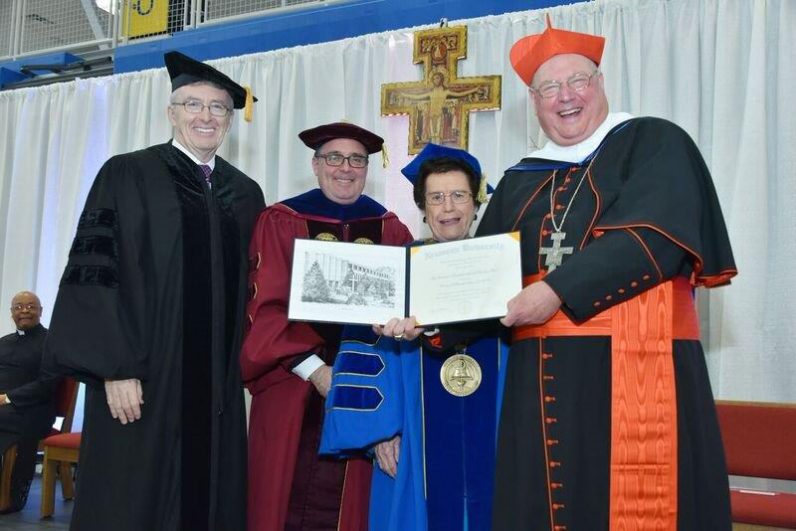 Amid the freshly plowed roads and lingering snow and ice left behind by Tuesday’s storm, activities went ahead to mark the granting of an education charter to the school, originally Our Lady of Angels College, by the Commonwealth of Pennsylvania in 1965. Neumann continues to be sponsored by the Sisters of St. Francis of Philadelphia.

At a Mass in which he was the celebrant and homilist, Cardinal Dolan said, “It’s clear to me (from) the gracious hospitality that I experienced that this is a campus where service is taken very, very seriously.”

Service was a theme for the day especially at the academic convocation and 13th annual Dorothy A.P. Leunissen Presidential Lecture by the cardinal that followed the Mass in the Mirenda Center Sport, Spirituality and Character Development on the Delaware County campus.

“Whoever wants to become great among you shall be your servant,” read the Gospel passage from the Mass (Mt. 20:26).

“We are blessed to be here to commemorate the chartering of an institution whose heart and soul is dedicated to the service of others, our very own Neumann University,” said Lawrence DiPaolo Jr., vice president for academic affairs. 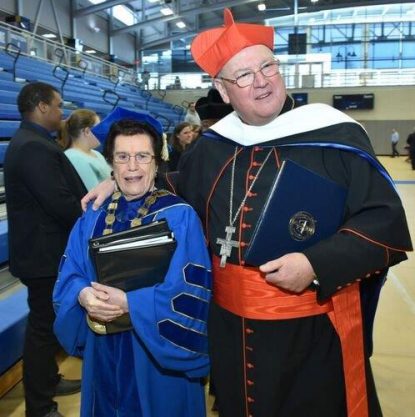 In his lecture titled “St. John Neumann: Yesterday, Today, Tomorrow” Cardinal Dolan spoke on the intertwined nature of Christ and the Church, noting that there can be no separation between the two.

He quoted French Jesuit Henri De Lubac, a leading theologian of the 20th century: “For what would I know of him without her?”

The cardinal said that truth is lived each day at Neumann, where “we sense the nobility of God’s truth in everything: from literature to physical therapy, to theology and philosophy to history and chemistry.”

“Here is communion realized in the gift of friends and classmates,” he said.

Cardinal Dolan was grateful for the honorary degree he received from the university, furthering a theme of gratitude also present during Charter Day.

“I was thankful to be a part of it. It was an honor to be here,” DiPaolo said. regarding the day.

Inspired by the cardinal’s talk, Dianna Dale, vice president for student affairs and enrollment management, said, “I’m so proud to be a member of the Neumann University family.”

The day struck a bittersweet note, however, as it was Neumann President Rosalie Mirenda’s last Charter Day as leader of the university. She will retire as president after 21 years at the close of the current term in June.

“We’re sad, no doubt, we’re a little anxious, for sure,” Mirenda said of herself and her husband, Tony, who also has had a prominent presence at the school, “but we are at peace with the decision that we made back in August.”

“And we know that with folks like you, friends like you here today,” she told the attendees, “Neumann University has nowhere to go but up. Up as a Catholic university in the Franciscan tradition. And I challenge each and every one of you … to support that Catholic identity. It will be the distinguishing feature for Catholic higher education as we go forward.”

Appropriately, the sisters closed the ceremonies with the Blessing of St. Francis, composed by Franciscan Sister Bonagratia Hughes, echoing both Mirenda’s legacy and the university’s hopes: “Pace e bene” (Peace and all good).

PREVIOUS: People with addictions, and loved ones, draw strength from faith

NEXT: Come to the cathedral this Sunday to pray for immigrants