The Catholic League continues to assert itself against the state’s finest competition.

“At this point of the season, everyone is hyped up and locked in,” said Archbishop Ryan junior swingman Ant Woodards. “It’s an amazing experience of a lifetime.”

Ryan has taken full advantage of its first-ever PIAA opportunity. The Raiders are the only local 6A boys’ team still alive.

“We worked hard for this,” said Woodards. “We deserve it.”

“It’s been great and exciting,” said Vargus. “Ryan has never made it to states, so we are proud and hoping to keep the momentum going. I think winning and just seeing our school and coaches so proud of us has been great.” 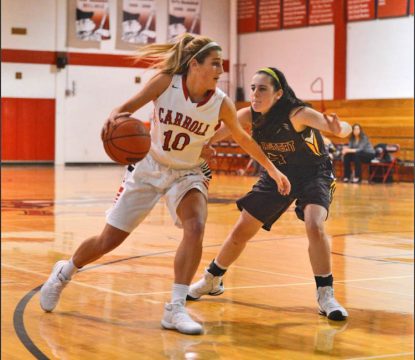 The first-team All-Catholic drilled four straight free throws in the closing seconds to help turn a loss into a win, thus advancing the Patriots to the quarterfinals.

“I was a bit nervous since the crowd was really loud, but I tried my hardest to concentrate on making those free throws,” said Sorrentino.

Also a standout soccer player who will play that sport at Temple University in the fall, Sorrentino preferred talking about her team’s overall performance rather than her individual contribution.

“We have been getting better over the course of the season, and I feel like our team is peaking right now,” said Sorrentino. “We lost in the first round last year, so that gave us motivation to come back this year and try to win the state title.

“Our coaches have been amazing, and every game we are prepared with a great game plan.”

“Tonight went very well,” said junior Kenzie Gardler, who netted seven points. “We played as a team — sharing the ball, making the next pass and looking for the person making the shots.”

Archbishop Wood needed late heroics from several players to survive a terrific effort by underdog Shanahan. With the score tied at 23-23, junior Katie May made a three-point play with 22 seconds remaining to give the Vikings a 26-23 lead.