Pastor and painter: Finding faith in the stillness among the ruins 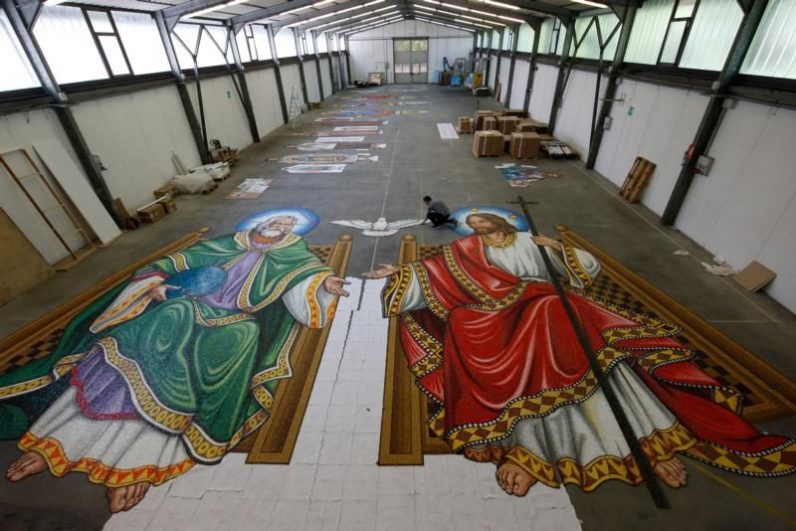 A man works on a section of a mosaic with figures of God the Father and Jesus in 2016 in the warehouse of the Travisanutto Giovanni mosaic company in Spilimbergo, Italy. Creating art can put an artist in
touch with the religious sense that has been worked into the very life of the land. (CNS photo/Paul Haring).

It is common for pastors to look at their work through wide-angle lenses. There are many people, many needs, and all sorts of religious and human realities that really need your attention. With over 50 years’ experience under my belt, I know just how varied people’s daily realities can be.

But I am also a painter; I work with watercolors. An amateur painter of course, but practiced enough now that I can slip into the peace I find that I need.

Painting requires a very different lens from the pastor’ wide-angle view of life on the move. And I didn’t come to that realization gradually. I was actually forced to face the limits of that view, which came as a surprise.

An unanticipated and demanding ministry required opening my life to living in quiet and stillness. Not just facing it as a reality out there somewhere, but living in it myself. And it was in that quiet that my painting went from a hobby to a real part of life.

Beginning in 1999, I began working in the former Soviet Union, in the Lithuanian capital of Vilnius. The Soviet tanks had been gone for only five years.

Every walk on any street brought me face to face with the Soviet’s 50-year reign of terror. How it had reduced many historic buildings and churches to empty wrecks with grass growing on the window sills, the windows broken by state vandalism, the people scattered.

And as I got to know people, there were the endless stories of surprise arrests, deportations to Siberia, thousands spending years in slave labor camps. Everyone lost someone.

For some reason, I started sketching and painting some of the once beautiful and historic churches. Ruins do not move. They are as fixed as their histories are painful. So I had to slow down, even stop, to get some sense of their realities. That meant setting that American, wide-angle lens aside.

To appreciate what I was sketching, even in some limited way, I had to look through a narrow and focused lens. I am still surprised with what came into view.

From the details of ruined buildings to the realities of ruined lives. And then, surprisingly, the view that really moved and took hold of me were the faces of the old.

I would sit in our church waiting for our noon Mass and watch as they came in. Sometimes hours in advance, mostly women, bundled against the cold, and I would look at their faces. Pained, enduring. They would attend to their prayers alone and in silence.

They did not greet each other. You didn’t greet people publicly in the Soviet Union. The police were watching. As I watched I knew that God was present in that peasant solitude. Their faith was as rock-solid as the five-foot-thick walls of our church.

I came to see that those closed and vandalized churches that I first saw as ruins were actually serving as religious anchors in their lives, they were still living symbols of God’s enduring presence.

In the past, all through the short but splendid summer in this northern land, village life celebrated Catholic family events, weddings, patron saints, first Communions. And all involved joyous processions through the streets, with banners blowing in the breezes.

Then they were gone. But these reminders were alive. That, I suspect, is why I painted them. I came to see them through their eyes.

I went there an outsider. Somehow my painting put me in touch with the religious sense that was worked into the very life of the land. I always knew that my own faith was not very different from the earthy piety of these Catholic people.

Now as I sketch before beginning to paint I look through the lens of religious memory. Somehow if there is something worth painting it has to be made of that same dirt and bones of daily life where faith has its roots.

PREVIOUS: Sacred art: Gazing at God through images and architecture

NEXT: Lectio divina: Discovering art as an aid to worship