Jesus knows the heartbreak of life, and he is with us 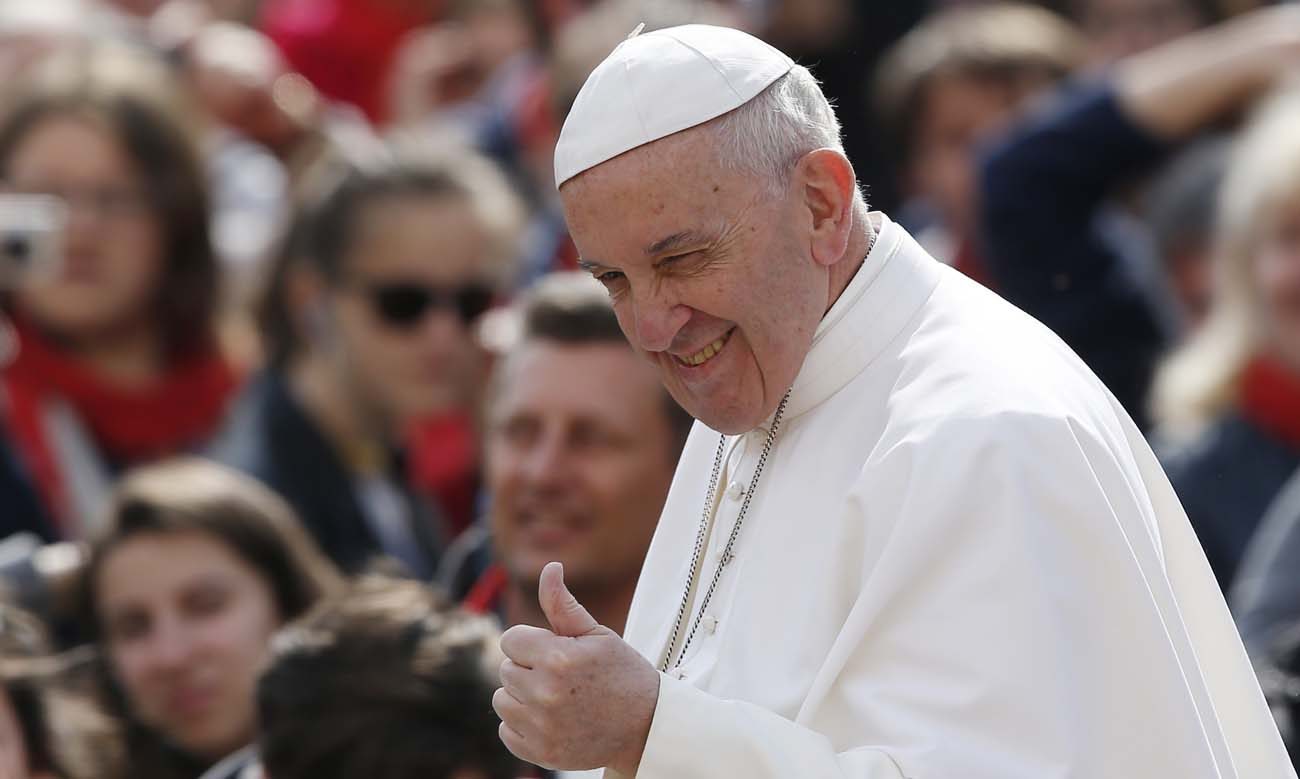 Pope Francis gives a thumbs up as he greets the crowd during his general audience in St. Peter's Square at the Vatican April 26. (CNS photo/Paul Haring)

VATICAN CITY (CNS) — Christians always have hope, no matter how bleak, bad or uncertain the journey, because they know God is always by their side, Pope Francis said.

In fact, “even crossing parts of the world (that are) wounded, where things are not going well, we are among those who, even there, continue to hope,” he said at his weekly general audience in St. Peter’s Square April 26.

Just a few days before his visit to Cairo April 28-29, the pope continued his series of talks on the nature of Christian hope, saying it is rooted in knowing God will always be present, even to the end of time.

The Gospel of St. Matthew, he said, begins with the birth of Jesus as Emmanuel — “God with us” — and ends with the risen Christ telling his doubtful disciples to go forth and teach all nations, assuring them that “I am with you always, until the end of the age.”

The apostle shows how “ours is not an absent God, sequestered in a faraway heaven. Instead he is a God ‘impassioned’ with mankind,” so tenderly in love that he is unable to stay away, the pope said.

Human beings are the ones who are really good at cutting off ties and destroying bridges, not God, he said.

“If our hearts get cold, his remains incandescent,” the pope said. “Our God always accompanies us even if, through misfortune, we were to forget about him.”

In fact, the decisive moment between skepticism and faith is “the discovery of being loved and accompanied by our Father,” the pope said.

Life is a pilgrimage, a journey in which “the seduction of the horizon” is always calling the human “wandering soul,” pushing people to go and explore the unknown, he said.

“You do not become mature men and women if you cannot perceive the allure of the horizon — that boundary between heaven and earth that asks to be reached” by those who are on the move, he said.

Christians never feel alone “because Jesus assures us he not only waits for us at the end of our long journey, but accompanies us every day,” even through dark and troubled times, he said.

God will always be concerned and take care of his children, even to the end of all time, he said. “And why does he do this? Quite simply because he loves us.”

The pope said the anchor is one of his favorite symbols of hope.

“Our life is anchored in heaven,” he said, which means “we move on because we are sure that our life has an anchor in heaven” and the rope “is always there” to grab onto.

So if God has promised “he will never abandon us, if the beginning of every vocation is a ‘Follow me,’ with which he assures us of always staying before us, why be afraid then?” the pope asked. “With this promise, Christians can walk everywhere,” even in the worst, darkest places.

“It’s precisely there where darkness has taken over that a light needs to stay lit.”

Those who believe only in themselves and their own powers will feel disappointed and defeated, he said, “because the world often proves itself to be resistant to the laws of love” and prefers “the laws of selfishness.”

Jesus promising “I am with you always” is what keeps the faithful standing tall with hope, believing that God is good and working to achieve what seems humanly impossible.

PREVIOUS: In the mystery of Easter, all are called to encounter risen Lord

NEXT: To reverence God, take a knee — but which one?